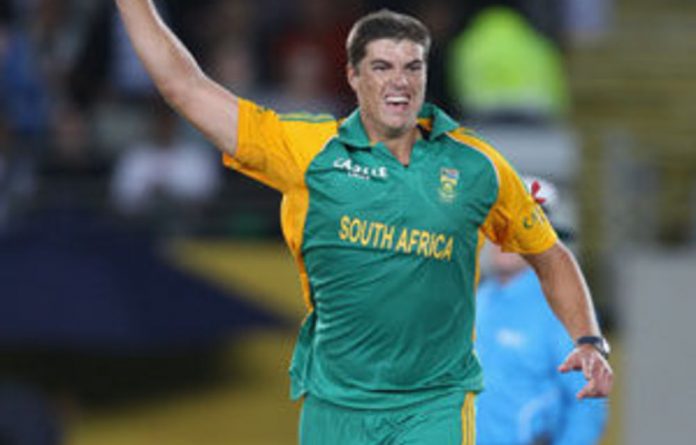 Marchant de Lange took two wickets in a final over on Wednesday that conceded only three runs as South Africa blunted New Zealand’s run chase to win the third Twenty20 International by three runs and take the series 2-1.

New Zealand started the last over needing seven runs with five wickets in hand to overhaul South Africa’s total of 165-7, but failed spectacularly to finish on 162-7 in one of their most embarrassing international defeats.

Even a no-ball by De Lange from the last delivery of the innings couldn’t save New Zealand. When he overstepped, the New Zealanders needed a four from the last ball to win the match and series. But Tim Southee, newly at the crease and facing his first ball, played and missed outside off stump.

“When the pressure came on we were found wanting,” New Zealand captain Brendon McCullum said. “Credit to South Africa, they kept the pressure on us and we didn’t respond. Obviously we foundered at the end. That’s not the way we want to play cricket. In pressure situations we want to play ruthlessly and to put other teams away, but we didn’t do that tonight.”

New Zealand had been coasting to victory when Jesse Ryder, recalled to its lineup for the first time since December after overcoming a calf injury, compiled a half-century from 37 balls.

Ryder hit five fours and two sixes after Rob Nicol (33) and Martin Guptill (26) had put on 65 for the first wicket in only six overs.

Brendon McCullum furthered the run chase, scoring 18 from 19 balls to reach 112-3, leaving New Zealand only 53 from the last eight overs.

Lost
When Nathan McCullum was out on the second ball of the 16th over, New Zealand was 142-4 and needing 24 runs from 28 balls.

But New Zealand began to lose their way from that point. Ryder was held scoreless for eight consecutive deliveries by tight South African bowling. He was out for 52, leaving New Zealand on 158-5 and needing eight to win with seven balls remaining.

Nothing from that point went to plan.

De Lange bowled a series of fast, short-pitched deliveries from which a succession of New Zealand batsmen were unable to score. The New Zealanders were bent on hitting boundaries and, as each ball passed without a run being scored, the match tipped in South Africa’s favor with De Lange and offspinner Johan Botha maintaining an unrelenting pressure.

Ryder tried to reverse-sweep Botha and was caught by Morne Morkel at fine leg. Nathan McCullum top-edged another contrived shot and was caught by wicketkeeper AB de Villiers from the third ball of De lange’s final over. A scoreless Doug Bracewell, hitting out, was caught by Hashim Amla two balls later.

James Franklin faced the prospect of hitting a six from the final ball of the innings to win the match but was reprieved when De Lange overstepped. New Zealand scrambled a single and Southee was left with the strike and a free hit, needing a four to win the match.

Just too far
De Lange bowled a fast ball wide of off stump and Southee, anchored on the crease and swinging blindly, was unable to make contact.

Nicol claimed 2-20 from three overs, and took a catch in the deep to dismiss dangerman Richard Levi for 11 when South Africa was 20-1.

Levi scored an unbeaten 117 — the fastest century in Twenty20 internationals, including a world record 13 sixes — to guide South Africa to an eight-wicket win in Sunday’s second match after New Zealand won the first by six wickets.

Nicol also caught Albie Morkel for 10 and completed a brilliant run out off his own bowling to dismiss the innings’ top-scorer, JP Duminy, for 38. — Sapa-AP