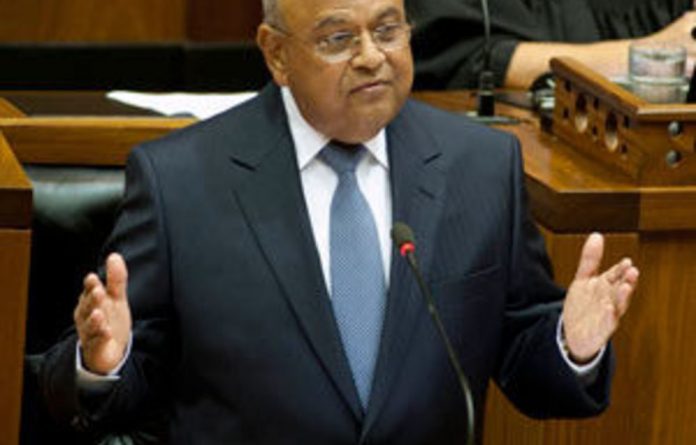 Opposition parties and analysts have largely given Finance Minister Pravin Gordhan’s 2012 budget, delivered in Parliament on Wednesday, the thumbs up, especially on plans to manage the deficit, though certain issues — including freeway tolling plans, business taxes, infrastructure spending and youth and public service wages — were still of concern.

Cosatu expressed the most vocal dissatisfaction, with general secretary Zwelinzima Vavi vowing to press ahead with protests against e-tolling plans.

“I was impressed the minister managed to balance an increase in spending with some tax cuts and still forecast a deficit,” Gina Schoeman, senior economist at Absa Capital told the Mail & Guardian.

Pegged at R1.06-trillion, the overall budget passes the trillion mark for the first time in South Africa’s history, while the total revenue is predicted to reach R904.8-billion.

But while Gordhan predicts public debt to stabilise at 38% of GDP, it was of concern that economic growth is set to slow to 2.7% in 2012 — down from 3.1% in the preceding period.

“It rightly emphasised the need for a collaborative effort from all South Africans to work together to realise a rapidly growing, vibrant and inclusive job-rich economy against the backdrop of a weak global economic outlook,” Nomaxabiso Majokweni, Busa’s chief executive, said of the budget.

This was echoed by opposition the United Democratic Movement (UDM), who felt Gordhan did the best he could “under the circumstances”.

“You must keep in mind we are operating in an environment where there are declining revenues and ever-increasing demands for expenditure on government,” UDM deputy secretary general Nqabayomzi Kwankwa said.

Gordhan himself is confident the measures introduced in his budget to tackle joblessness and poverty are adequate.

“We have to say to our people that economic uncertainty will be with us for some time, yet we have a programme of economic change that can steadily roll back unemployment, poverty, and inequality,” he told reporters in Parliament.

‘It’s good, but …’
Nonetheless, despite the budget enjoying praise from a broad section of society, there were concerns.

The DA’s spokesperson on finance, Tim Harris, bemoaned the fact Gordhan failed to elaborate on the proposed implementation of the youth wage subsidy, which aims to create sustainable employment for South Africa’s young people.

“The finance minister pays lip service to creating jobs for young people, but allows the ANC’s alliance partners to hold up the implementation of the youth wage subsidy and therefore block a policy that would create jobs for hundreds of thousands of young people,” Harris said.

Of the wide-ranging measures to combat corruption and improve delivery capacity, IFP leader Mangosuthu Buthelezi said he hoped it was not “lip service”.

“I feel that we have not yet crossed into the terrain of the much spoken of leadership that the country needs. The measures taken are still mild when drastic measures are needed,” Buthelezi said.

Neren Rau, the chief executive of the South African Chamber of Commerce, expressed concern over increase in business taxes.

“We are a bit concerned about the impact that would have during a time when liquidity is fairly tight,” Rau said.

“I would like to have seen a bit more of a reprieve for middle-class South Africans who are still overstretched. The increases in Capital Gains Tax are aimed at the rich but they will withstand the increase,” Hardien told the M&G.

“The middle class will have to cut back in other areas when products and services become more expensive due to the increases.”

Union federation Fedusa, meanwhile said it was “cautiously optimistic” about the budget.

Budget takes its toll
Despite lower tolling tarrifs, Cosatu vowed to press ahead with a strike against toll fees in Gauteng.

“We are not cash cows that can be held up on behalf of foreigners who want to make money off us by using our public goods,” Cosatu general secretary Zwelinzima Vavi told SABC news.

The new fees would see drivers of ordinary vehicles pay 30 cents a kilometre, instead of 66 cents as originally planned. Vavi said this was not good enough.

“The strike continues on the 7th of March and we probably will have another strike by the 30th of April, the day that he [Gordhan] says they will start introducing or enforcing this e-toll gate in Gauteng. We will not compromise.”

The National Education, Health and Allied Workers’ Union (Nehawu), also slammed the tolling plans, saying it not believe the treasury had listened to public concerns about the system.

“The proposed ‘appropriation of R5.8-billion’ does not address the workers’ demands as far as the Gauteng freeway tolling is concerned,” Nehawu general secretary Fikile Majola said.

Nehawu also said it would “vehemently oppose” attempts by the treasury to bring about “wage moderation” in the public service.

“We are particularly pleased that the first five years in the plan’s rollout are going to focus on strengthening the public health sector infrastructure and the training of more professionals.” — Additional reporting by Sapa