From fanaticism to farce: the decline of the ultra-right 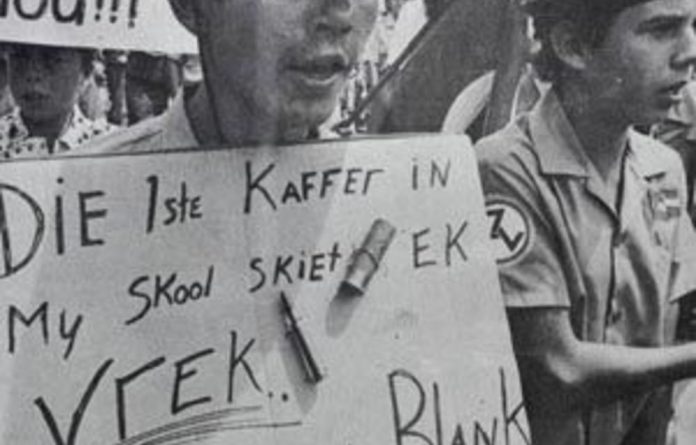 We all have some form of radar to detect whether people are like us or unlike us. Or do not like us.

Gay people have a “gay-dar” that identifies other gay people. South African right-wingers had an almost foolproof detection tool that I call kyk daar (check there).

They immediately knew when you were not one of them and they let you know too: “Kyk, daar’s ‘n joernalis. Sal ons hom moer? (Check, there’s a journalist, shall we beat him up).”

I covered right-wing politics during the 1990s for the Weekly Mail (now the Mail & Guardian) and then the Sunday Times and was the researcher for the British TV documentary on the far right, The Leader, the Driver and the Driver’s Wife. I spent most of my time with Eugene Terre’Blanche and his Afrikaner Weerstandsbeweging, but also with other splinter groups in the even further right field.

At the time, Die Leier (The Leader) was on the rise again after he nearly saw his holey, green-underpanted backside in the Jani Allan affair — the blonde Engelse meisie (English girl) who could not resist his blowtorch-blue eyes. I followed him with his misguided supporters to Pretoria, Boksburg, Ventersdorp and other desperate dorpies throughout the platteland.

I was often the only journalist to hear the bearded one roar, “When old Mandela takes over, that night there will be waaarrrr!” through a cloud of spit, followed by khaki-clad supporters on their feet roaring back: “AWB! AWB! AWB!”

Even though I dressed down in different shades of beige and spoke better Afrikaans than most of them, they instantly knew I was an outsider through their finely developed kyk daar radar. They always jeered when ET verbally attacked the media — “Skande! Sies! Skande!” (Shame! Disgusting! Shame!) — and threatened us with violence.

Siding with democracy
In spite of our shared ethnic heritage, Terre’Blanche and his cohorts could never stand me. I never told them so, but their kyk daar told them I was an Afrikaner siding with the struggle for a democratic South Africa, whereas they were boers, willing to take up arms to protect the so-called boer republic.

His war talk, neo-Nazi imagery and uniform and the roll-out of paramilitary units such as Aquila, Stormvalke, Wenkommando and Ystergarde with their show of force and racist taunting of black bystanders, as well as several aggressive gun demonstrations by male, female and youth members at the Ventersdorp shooting range, sent chills down my spine.

Some AWB members were responsible for the deaths of black people during those years. A horrifying picture that still sticks in my mind was taken by the late photographer Kevin Carter at an AWB march the two of us attended in Vereeniging. A crazy-eyed teenage boy in AWB uniform was carrying a poster saying: “Die eerste k***** in my skool skiet ek vrek” (The first k***** in my school I will shoot dead).

But, more often, the AWB was pure farce. I once wrote a Weekly Mail piece about the AWB’s first female commandant. I ended the article by telling how another “commandant” roared from his office as we walked past: “Sannie, when am I getting my tea!?”

The next week was the so-called Raid of Pretoria in which the rightwingers blockaded the capital with their bakkies, tractors and trucks.

I finally saw Terre’Blanche in the evening not far from the Union Buildings after he had been missing in action the whole day. (It later transpired that he was locked up in a member’s house because he was a bit “tired and emotional”.)

Unsteady on his feet, he was the centre of a lekker party. All his friends had beards, so it could not have been their aftershave that reeked of brandy as I entered their circle.

“Leader,” one irritated AWB said as he touched Terre’Blanche’s elbow and nodded in my direction: “This one wants to talk to you.”

Writing shit
I introduced myself because it looked as though he could not remember me. But after a few seconds, ET’s eyes narrowed and his voice menacingly dropped a few octaves.

“You are the fellow who wrote shit about my commandant!”

I had already made my U-turn when one of his thugs slurred: “Leader, must we take him?”

Luckily brannas makes you slow, so I never found out whether ET said yes as I disappeared into the Pretoria night.

The ability to play an instrument was never a prerequisite for the AWB’s brass band, which tortured its instruments and our ears at every rally.

But it was the rally at the Klerksdorp showground that tested my ability to keep a straight face. That was when they proudly unveiled, at the back of the procession, the five-man AWB onderwater duikkommando (underwater diving commando — spot the obvious tautology) waddling along in full diving suits, snorkels, flippers and aqualungs, “probably to ensure that black people did not go into the sea”, I muttered to a colleague.

Unhorsed
There was the time at Church Square in Pretoria when ET came galloping around the corner on his black horse speeding like a tow truck en route to an accident. I am not sure whether the rider was not 100% sober or whether the horse slipped on the cobblestones, but the next thing The Leader flew down beard first. I had to run away and squat behind a low wall so that his embarrassed supporters could not see me laugh.

Later, on the way back to Johannesburg, I had to stop as I replayed the scene in my head. I could not see the road through the tears of hilarity. The Flying Leader was to become symbolic of where the right wing was heading.

I saw them fleeing Bophuthtswana after their aborted and bloody invasion in support of Lucas Mangope in 1993. South Africa’s first democratic election the next year signalled the AWB’s death as a political force. Its kyk daar radar was not completely foolproof and the AWB was easily infiltrated by intelligence agents.

At the time of his brutal slaying in 2010, Terre’Blanche was a political has-been and his AWB — and the rest of the ultra-right wing — so diminished and on the fringe that, unlike in its racist heyday, nobody took it seriously any more.

Back then, like most losers, they were brave in numbers. And they had the protection of apartheid. Now, they are still losers but without the numbers and apartheid. It makes the remaining right-wingers more of a curiosity than a threat.