Madiba said to be in good health, home soon 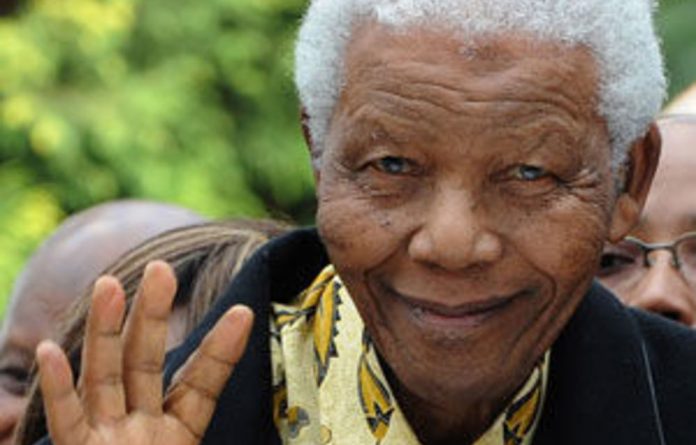 Former president Nelson Mandela was “not in any danger” and was in a “satisfactory condition” in hospital, the Presidency said on Saturday afternoon after he was admitted to hospital.

“President Jacob Zuma wishes to advise that former President Nelson Mandela is in a satisfactory condition in hospital and is comfortable,” Zuma’s spokesperson Mac Maharaj said in a statement.

“Madiba is fine and fully conscious and the doctors are satisfied with his condition, which they say is consistent with his age. He was in good health before admission in hospital but doctors felt the complaint needed a thorough investigation.”

“He underwent a diagnostic procedure as part of his ongoing medical management.”

“We are happy that he is not in any danger and thank the doctors for their hard work and professionalism. He is receiving good medical care and is expected to be discharged from hospital either tomorrow [Sunday] or Monday,” said the Presidency.

Mandela was admitted to hospital on Saturday morning for a “long-standing abdominal complaint”, Maharaj said.

“We reiterate the request for the privacy of Madiba and his family to be respected.”

The name of the hospital was still not disclosed.

“His [Mandela’s] admittance was pre-arranged. Mandela was complaining about abdominal pain — now it is a matter that his doctors and specialists will decide on,” African National Congress spokesman Keith Khoza said.

By late Saturday afternoon, there was no further information on former president Nelson Mandela’s health, nor had the name of the hospital where he was being treated for a stomach ailment been released.

The Presidency issued a statement late on Saturday morning to say Mandela had been admitted to hospital. He was suffering from a “long-standing abdominal complaint and doctors feel it needs proper specialist medical attention.”

While the Presidency’s decision to issue a statement to inform the public was welcomed all-round, by late afternoon, a veil of silence was hanging over the hospitalisation.

“When we have info, we will issue an authoritative statement guided by our commitment to keep the public informed,” presidential spokesperson Mac Maharaj said in an SMS to Sapa on Saturday afternoon around 3.45pm.

“We are unable to compete with the speculators,” he added.

No news
Maharaj said he would provide further information when doctors had finished consulting and President Jacob Zuma had been briefed.

“Before he was admitted this morning [Saturday], he was doing well. We have an obligation to the public to keep them informed on Mandela’s health and will do so — when we have news.”

The National Press Club (NPC) congratulated the Presidency for its swift communication of the admission.

“Unlike the [2011] PR fiasco where nothing was said initially, we are pleased the Presidency has learnt from their mistakes,” said NPC chairperson Yusuf Abramjee.

DA leader Helen Zille said: “We also trust that the Presidency will keep South Africa and the world constantly updated on the progress of our former President’s recovery.”

By that Friday, with very little information to go on, reports of his death started running on Twitter.

It was only when he emerged on a hospital gurney, wearing a hairnet on his way home that the rumours were put to rest. This had followed a packed press conference at 12.30pm on January 28, addressed by Deputy President Kgalema Motlanthe and Surgeon General Vejaynand Ramlakan.

The Nelson Mandela Foundation, which customarily managed publicity for the Nobel Peace Prize winner, only broke its silence on January 31 2011.

This was after then-Sunday Independent editor Makhudu Sefara wrote an item called “The making of an unnecessary crisis”.

‘Turf war’
In his piece, he said Mandela had a collapsed lung and that the foundation’s spokesperson Sello Hatang had lied when he said that hospitalisation was routine.

Sefara later withdrew the statement about the lung and the comment that Hatang was a liar.

It also emerged that there had been a “turf war” over who should handle the information flow on Mandela’s health.

This time around, as the media waited for more news on Saturday, an unsourced report by the British Broadcasting Corporation said he had undergone surgery for a hernia.

African National Congress spokesperson Keith Khoza responded by saying: “If we look at the statement released by the Presidency, it does not state that Mandela is going in for surgery. We do not want any speculation.

‘Epitome of health’
“His [Mandela’s] admittance was pre-arranged. Mandela was complaining about abdominal pain — now it is a matter that his doctors and specialists will decide on.”

Meanwhile, reporters and photographers scattered from one hospital after another in Johannesburg and Tshwane, to track him down.

Media-weary guards and receptionists asked reporters and photographers to leave the premises.

In Tshwane, Beeld photographer Theana Breugem, who had taken pictures of the One Military hospital building, was made to delete the pictures she had taken after being briefly detained.

Outside his house in Houghton, journalists seemed to be waiting in vain for an update on his condition.

Reporters also scanned their contact files for anyone in the “inner circle”.

AFP quoted Ndileka Mandela, a granddaughter from his first daughter, as saying: “He’s in perfect health. When I saw him on Wednesday he was in good spirits, in perfect health, and, you know, the epitome of health really, for a man of his age.” –Sapa