‘Because he cares’: Malema sticks his ore in at Implats 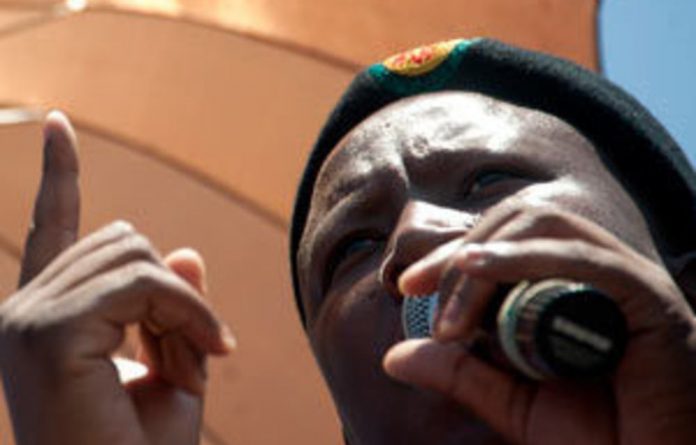 The sun beats down on Michak Sedimo, a striking Impala Platinum (Implats) mineworker at Seven A Shaft near Rustenburg. Armed with knobkerrie and sjambok, he awaits the arrival of ANC Youth League president Julius Malema.

It’s been a difficult time for Sedimo and around 9 000 other workers entering into their sixth week of strike action at Implats.

ANC Youth League president Julius Malema has urged strikers at the Impala Platinum mine in Rustenburg to negotiate a peaceful end to their labour dispute, which has left three people dead.

“I work for over 12 hours a day and earn peanuts. I have a family to support on only R4 500, while these mine bosses earn big salaries and get bonuses — it’s not fair,” says Sedimo.

A convoy of BMWs and Range Rovers herald the arrival of the controversial youth leader. He may be over two hours late but he still draws a rapturous applause from the assembled masses.

“Juju! Juju! Juju!,” they chant, as he walks onto the stage.

‘There is something wrong’
Wearing his trademark Chris Hani economic freedom fighter T-shirt, Malema addresses the crowd: “Comrades, we are here to support you, we always will. We know the ANC is in power because of the workers.

“Once workers go on strike, we must know there is something wrong — that’s why we are here,” he says.

Malema has waded into the ongoing labour dispute at the mine, which was ignited by the selective pay hikes to certain sections of Implats workforce.

An illegal strike began on January 20, which has led to over 17 000 workers being fired.

Some have been re-employed on the condition they forego all accumulated benefits — effectively worsening their circumstances.

Besides immediate re-employment without forfeiting work benefits, striking workers are demanding a basic wage of R9 000 after deductions. This marks a significant jump from the current wage of between R3 000 and R4 500.

It’s give and take, comrades
At the stadium, Malema promises to take up the cause, but says workers should not make inflexible demands.

“Workers must be prepared to negotiate and the employer must also talk. It’s give and take, comrades — you can’t demand and do nothing,” says Malema.

But it’s more complex than a simple wage dispute.

Striking workers have also led a mutiny against their representatives from the National Union of Mineworkers (NUM). The representatives stand accused of colluding with Impala Platinum and allegedly coercing strikers into accepting the new terms of employment and wages far below those demanded.

A breakaway union, the Association of Mining and Construction Union, led by an ad hoc committee of striking miners, has vowed to never accede to the demands of the employer.

Three non-striking miners have been killed in the last week — allegedly by striking workers unhappy they didn’t take up industrial action.

“We understand that it’s sad. They were victims of the situation. They didn’t want to stand with us but we know this story. We black people need to do this before we are heard,” says Sedimo of the dead miners.

‘Let us be militant and radical; but peaceful’
On stage, Malema decries the killings, while hinting at racial prejudice.

“You must never allow a white person in the workplace to divide you — that is an apartheid strategy. Black on black violence is never acceptable. Let us be militant and radical; but peaceful. Don’t fight each other as it undermines your cause,” says Malema.

North West premier Thandi Modise — who doubles up as ANC deputy secretary general also takes to the stage to address the miners.

Compared to the enthusiastic reception afforded to Malema, Modise — an elected official chosen by the bulk of these striking workers — is jeered by the crowd as she speaks.

“We have organised a meeting with NUM and your employer. We are fighting for you but not in the way you are fighting. Next week this matter will be resolved and you will be back at work,” says Modise.

Modise and NUM’s efforts to end the dispute seem marginal to the workers.

The event has not only scored political points for Malema but also provides the perfect opportunity to gain sympathy for the battle against his suspension.

“If you are unhappy with your leaders you must change them inside your movement. Like my blood is ANC — your blood is NUM. Fight to have the leadership you want,” he says.

Malema and several other leaders are facing suspension and possibly expulsion from the ruling party.

Malema, along with league spokesperson Floyd Shivambu and secretary general Sindiso Magaqa, have argued in mitigation of their sentences, which were handed down to them by the ANC’s national disciplinary committee in November last year.

It is understood the youth leader is now leading a charge within the ANC to have President Jacob Zuma and secretary general Gwede Mantashe replaced at the party’s next elective conference in December.

Malema also uses the platform to renew the league’s call for nationalisation.

“These are our mines and we must fight until we benefit from these mines. Never apologise for demanding an equal share,” Malema tells the excited crowd.

As his address ends, Malema is swamped by strikers offering handshakes and pats on the back: For Sedimo and the thousands of other striking workers, Malema remains a symbol of hope.

“This guy knows the story — he isn’t afraid to tell the truth,” says Sedimo. “On radio, TV and in the newspaper he always says what he means. I believe he will help us. Because he cares.”