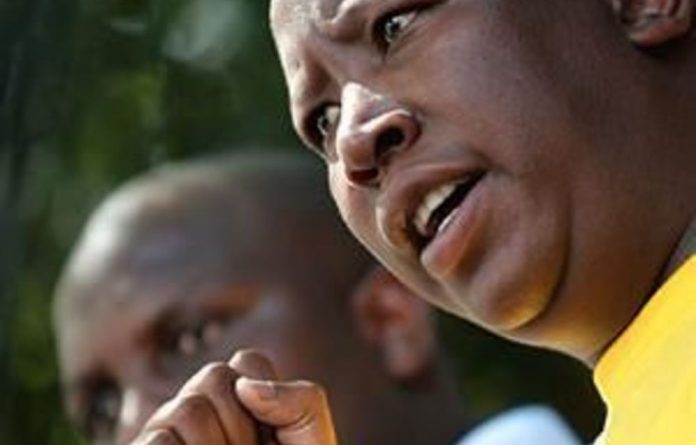 ANC Youth League president Julius Malema has been expelled from the ANC but may appeal his sentence within 14 days.

The announcement was made on Wednesday night by the ruling party’s national disciplinary committee (NDC) after deliberating over arguments offered in mitigation of sentence.

NDC chairperson Derek Hanekom said in a statement that it was unlikely that Malema could be rehabilitated.

Hanekom said Malema was found guilty of two serious offences and had shown no remorse.

Malema’s expulsion is the latest stage in the disciplinary process which began in August last year.

Malema along with league spokesperson Floyd Shivambu and secretary general Sindiso Magaqa argued in mitigation of their suspensions, which were handed down to them by the NDC in November last year.

After appealing the judgment, the ruling party’s national disciplinary committee of appeals upheld the suspensions, but ordered the NDC to hear mitigating arguments from the trio.

Shivambu and Magaqa received a lighter punishment, with the pair being slapped with a three-year suspensions. Magaqa’s sanction was suspended for three years, provided he doesn’t violate ANC disciplinary protocol again, while Shivambu’s suspension was upheld.

The NDC’s statement said their final decision was largely based on the fact that Malema did not show any remorse during the proceedings even after being found guilty.

‘Respect the decision’
The ANC released a statement supporting the announcement, shortly after it was made public.

“The ANC welcome and respect the findings as pronounced and made public tonight by the national disciplinary committee of the ANC. We call on our members and those of our leagues to respect this decision,” the statement read.

Malema and his colleagues are not immediately out in the cold as they are entitled to appeal their sentences with the national disciplinary committee of appeals within 14 days again.

Earlier in the day, the trio’s legal representative Dali Mpofu told the Mail & Guardian a formal complaint had been lodged with the NDC based on the lack of notice given to when the decision would be made public.

“If they decide to violate that process then so be it. It is something we would certainly raise in an appeal if we decide to go that route,” Mpofu told the M&G.

Malema’s options
Apart from the formal appeals process, Malema can also employ delay tactics, in order to drag the matter out until the ruling party’s next elective conference in Mangaung this December.

Malema could then try and have a formal motion tabled to ANC delegates with voting powers at the conference to have his sanction nullified.

The controversial youth leader can also take the matter to the ANC’s powerful national executive committee (NEC), who will have the power to overrule the NDC’s decision.

Initial indications are that while support is evident for Malema among some of the ANC’s top brass, the league would struggle to put together sufficient numbers to have the decision overturned.

The league has stated on several occasions that it will defy the ruling.

The young lions said the ANC should “inform and convince” the league and its members that the suspensions were the right decision and explain their reasoning in doing so.

A previous version of this story incorrectly stated that Malema’s expulsion was immediate. This was corrected on February 29 2012 at 11.33pm. We regret the error.