The last supper at club ZAR 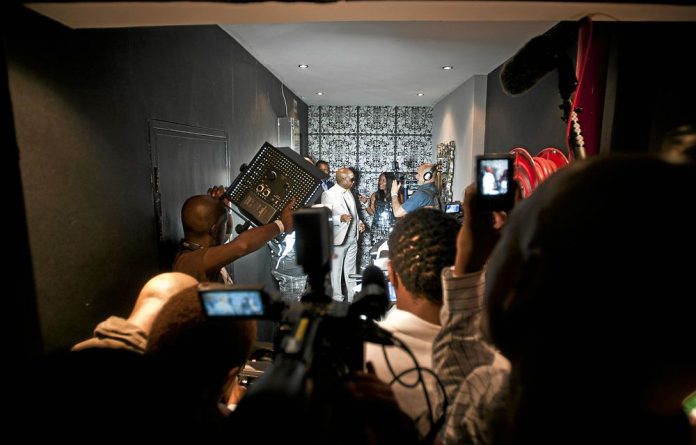 ‘Vroom, vrooooom-roooooohm,” revs the sound of a motorbike the size of a baby Harley (if there is a baby grand piano there should be a baby Harley Davidson, right?), although I cannot decipher its make.

“Vroooom, voom.” The silver beast with a blueish plastic top springs up right in the middle of Club ZAR. Sitting astride the motorbike is a young lass, undressed but for the slit of a red lacey see-through number hugging her bum.

All eyes are on her. Slowly, she simulates a humping act on the beast. Men’s eyes fire up. She is in a good mood and so is everyone else. She tells me she is Motswalo. “I am 25, from Limpopo, and studying to be a chef.” We make a deal: “I will tell you everything, but don’t put my picture in the paper. Mommy will kill me.”

She is cooperative. No one is forcing her to do anything — at least on the surface of things.

“I am a part-time model,” she says. Feminists would go crazy just looking at her. She shoots me a wicked “don’t even go there, I don’t care for your values” look. I get it and shut my trap. Money talks, babes ride the bikes, right? “I’m lovin’ this moment,” she says.

Voodoo hour
Half an hour to voodoo hour, it looks like the lady humping the bike is not the only one “lovin’ this”. Revellers here go about their business as though they were born for it. Officially, it is ZAR’s closing party and the launch of host Kenny Kunene’s CD, ZAR Sushi Mix, but no one could care less.

Listen to the full, candid interview Bongani Madondo had with Kenny Kunene at the M&G offices.

Evelyn Waugh, the 1930s English satirist, would have “loved this” too. It is a world torn straight from his Depression-era classic, Vile Bodies, peopled with characters with names such as the infamous Agatha Runcible, Adam Fenwick-Symes and Mr Chatterbox. In Waugh’s masterpiece, the wealthy English upper crust and the political jet-set, zombies around looking for the next upscale hit, party, or both.

It could be my eyes, but it feels like people do not walk as much as float around, wearing watermelon smiles. Many of them look pretty smacked up, too. But most swear the joint does not sell blow. Never has.

“We are just having the time of our lives. Why don’tcha, too? Put that ugly notebook down,” orders a girl I do not know. “My name is Jacqui. They call me Jack Zo-Zo. Have a life, okay, eish! Laba bama speks!?”

It is my first time at ZAR. Apart from the occasional junket, I usually give clubs a wide berth.

Missing out
“You don’t know what you been missing,” another patron – “just call me Mpumi” – who drove all the way from Durban, tells me, before cornering me and pointing at a secluded area: “I want that guy. I want that big guy.” She is pointing at Gayton McKenzie, ZAR’s co-owner. “I see you look respectable. What are you, an investor, journalist or something? Who wears black tie to these do’s?” The scorn in her voice could anaesthetise a raging bull.

Untangling myself from her grip, I feel disgusted. But I also experience a rush of excited curiosity. Is this what I have been missing? In the law of the neon-lit jungle, female hunter-gatherers rule, right?

I have been sent to ZAR’s closing boogie-down with no brief at all other than that this is not a showbiz piece. Go, have fun and observe. The assigning editor left unsaid the words: “Go see how young black South Africans and new money enjoy themselves, you old toff.”

Rumour has it that the venture has failed. This is veiled speak for “Kenny, the ex-convict who once fell butt first into a bowl of butter, has now hit the mud”, trampled by a lifestyle he could not afford in the first place.

Even though ZAR, which has another, much posher, sister in Cape Town, is one of the business ventures co-owned by the two fellows, haters are heaping it on Kunene’s carnivalesque flamboyance. Eating raw fish off the naked bodies of young women did not win him friends either.

The last boogie
But now the club is, to use the youth argot, “bouncy” as hell. There is a riot of lights at the makeshift “VVIP” section. An army of television and still cameras are trained on a character with a shiny bald dome and fancy dark glasses.

Kunene, aka Majozi, aka Ngwaneso, aka the Sushi King, is holding court. A lanky tabloid journalist conducts a lengthy interview. I wait my turn. The security chaps in lovely suits tell me to exercise patience. One of them introduces himself. “I am Serge Cristiano. Like Ronaldo Cristiano.”

It is noisy. I strain my ears to seem charitable to Serge. “I am Serge from Angola. I louve de Mail & Guardian.You were de only paper that was dere for me during my eight years of wrongful trial. I am suing the state for R4-million. Have you had drinks, mister?”

“What do you drinks? Lemme get something for you.”

Off he disappears amid a whiff of expensive perfume and perspiration shooting from under million-dollar tube dresses and muscle tops. I feel like Serge from Angola has been unleashed on me. He returns sans drinks, ushering me into Kunene’s space. Rope removed, I extend my hand to the man.

“Aw-ha-ha-ha, my bruddah,” Kunene pins my small shoulders down in a bear hug. He smells like a million dollars. Before I can get my three seconds of infamy with him, the interview is interrupted. From the DJ booth his pal, famed music producer Oskido, announces: “Hail Kenny Kunene. Kenny Kunene is a rock star.” Before the boof-boof sounds out and “rock star” Kunene himself takes over the turntable to display his long-held childhood aspiration to be a deejay, I notice he wears two watches. “One is Rolex Oyster with diamonds inside and this on the left is an IMC,” he tells me, dashing to the stage.

After the set I swim through the tide of young women and hangers-on and claim my two-minute interview.

What now?
What will happen to your staff? He is quick to counter: “They are not losing their jobs. Whoever is saying these people are losing their jobs is fucking nuts. They are being redeployed to my other business ventures.” He actually said “redeployed”.

Even when he is happiest, he says “fuckin” this” and “fuckin” that, much more often than the rudest species of humanity: pirates, rappers and journalists, in that order.
But he is not getting away easily from this one. Kenny, what business ventures are you talking about?

“Yo, bro, I have venture capital investments, equity, you know, I play around, I am hustler. I am a risk-taker. All my business is moving into a warehouse, which will operate like a huge production house. I am ­getting into clothing, perfume and getting ZAR to operate as a pop-up marquee venture.”

I am waved out with a “let’s do lunch on Sunday”.

Seeing me lost in the sweat, suggestive sex, bling and expensive hooch (that other king of radical Afro-debauchery, Fela Kuti, once referred to this sort of thing as “expensive shit”), a well-attired tabloid hack, Sunday Sun‘s editor Prince Chauke, beckons me over.

I size him up. Mmmh, not too bad. Journalists are not known for their sartorial elegance. The tabloids’ bin diggers seem to have been cut from a silkier cloth, though.

‘This is our style’
“My man, sit down,” he commands. “Relax. This,” he throws his hands mad-flapping about, as though surveying his livestock, “is our life, mah man. There’s nothing we can do. This is our style. We just can’t help it. It’s a new-money society, chief. Look, I get paid to party. Watchoo wanna drink?”

Later, Chauke, clearly big mates with the ZAR bling, introduces me to a newly arrived ANC Youth League spinmeister, Floyd Shivambu. I am curious about how he and his band of renegades are keeping, seeing as the ANC is pretty set on kicking their asses into the political wilderness.

It does not look like a lot of people are exactly mourning ZAR’s demise. Later, a fetching young lady, in a flowing cream number and million-dollar weave throws herself round my neck. Not too sure who it is, I do a double take. Why, but, it’s the queen of the night herself, Ms Khanyi Mbau! How to carry oneself in this sort of exalted company? I oblige her, smacking a smooch on either side of her chiselled cheeks in that Jozi social scene’s oh-so-fey, feigned familiarity.

“It is good that ZAR is closing,” she says. “It started as an exclusive joint, but, ah! What can you say? Sleaze balls had become a permanent feature. Kenny himself lost it. The plot. He should decide whether he wants to be a politician or do this.”

At about 4am I duck out, soaked in sweat. My perceptions are mixed. I do not know what, exactly, the noise was about ZAR’s closing. To me, it looked like an ordinary club, except, of course, it was not. What do I know?

The second season of So What?, Kenny Kunene’s reality show on e.tv, starts on March 19 at 8:30pm.

Read our Q&A with Kunene: Robin Hood or The Man in a Bling-hood?

Cast the first stone: Our Mary Magdalene of the townships