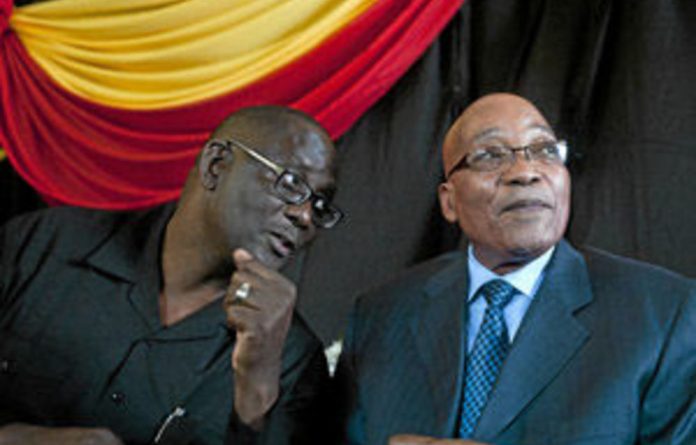 Cosatu moved into sleek new headquarters on Tuesday, and Julius Malema was ejected from the ANC’s revolutionary house on Wednesday. You could not ask for a crisper illustration of the shift that is under way in the battle for the commanding heights of the governing party.

As Malema is pegged back by the disciplinary process, and deprived of access to party platforms, the trade union forces who feel President Jacob Zuma has failed to reward their earlier support are beginning to occupy the space vacated by the ANC Youth League president.

Union opposition to Zuma has been evident for some time, but it has been contained by the divisions within the union movement over succession, and by the anxiety of some union leaders that any stand against Zuma would be contaminated by association with Malema and his tenderpreneurial backers.

The youth league will fight on, grinding away at the appeals process and the party’s national executive committee, as well as outside party structures, but Malema’s personal effectiveness as a campaigner for regime change within the tripartite alliance will be greatly reduced.

The realignment that is now under way is complex and uncertain, but a few things are clear.

Cosatu is split, but its charismatic general secretary, Zwelinzima Vavi, has built a distinctive brand of politics over the past two years around a recognition that the ANC faces a real crisis of legitimacy with its own core constituency.

Perhaps more than anyone else in the alliance, Vavi has captured rising anger over corruption and made it a political issue with mass relevance.

This week, he rejected a call by Zuma for union leaders to take up positions in the ANC national executive committee, saying this would compromise their independence, and suggesting that they needed to be able to differ from the party line.

But he is refusing to allow himself to be pigeonholed in either of the main existing camps.

Speaking at a recent “political commission” of the metalworkers union Numsa (which has been starkly anti-Zuma under Irvin Jim) Vavi complained that plain speaking on alliance issues had become impossible because “there’s a big drive to keep everyone quiet. You are either with us or against us … if you’re against us we’re smashing you.”

Vavi on Thursday told journalists that Cosatu would defend the leadership elected at Polokwane from “the new tendency that is trying to destabilise it”, but went on to say, “we shall encourage our members to assess the leadership of the alliance formations at the right time”.

That time could, of course, be December this year. In one move then, he put clear distance between Cosatu and Malema, while keeping Zuma on notice.

It is important to remember that Vavi is speaking on behalf of the union federation. The differences between him and Cosatu president Sdumo Dlamini, who is seen in the alliance as a firm supporter of Zuma, mean it is difficult for Vavi himself to take a more direct line against the top leadership at Luthuli House – although the strike this coming week clearly takes on a safer proxy target, government.

Amid the apparent equivocation, however, it is clear that Vavi is unhappy with both the Zuma administration and the culture of self-enrichment Malema has come to represent.
Malema’s difficulties may now make it easier to articulate a third option, which pulls together the strongest elements of the leadership slate backed by Zuma’s main critics, while jettisoning the man from Seshego.

There can be no doubt that Zuma is greatly strengthened, and any opposition formation is going to have a difficult time, but a more disciplined coalition – marshalled by the unions and incorporating figures who are palatable to an ANC mainstream alienated from both camps -may still present a challenge.

That will mean adding some new contenders for the ANC’s top six positions who are not so firmly identified with either faction, and who bring some gravitas with them. Lindiwe Sisulu’s name, with its connotations of struggle royalty, is one of those that is circulating in this context.

There are other undercurrents complicating this picture. The differences between the National Union of Mineworkers, under Frans Baleni, and Numsa under Jim may be difficult to finesse. Baleni’s cool style and support for the ANC leadership could not be more distinct from Jim’s populist rhetoric, support for nationalisation and calls for leadership change.

Malema, meanwhile, may have given us a glimpse of his own campaign plans on Tuesday, when he addressed a crowd of striking workers at the Impala Platinum mine.

He knows that his ability independently to mobilise large crowds around his personal plight is limited – he has so far been unable to do so.

Instead he will go where the pain is. Where people feel abandoned, where they are gathering to protest, and to defy political authority, he will join them and speak outsider to outsider. That way he doesn’t have to generate popular rage, he can simply resonate with it.

Against the organised might of the ANC this is asymmetrical warfare indeed, and it may have little immediate impact, but it is Malema’s best shot at continued political relevance.