All for one: Youth leaguers ready to risk it all for Juju 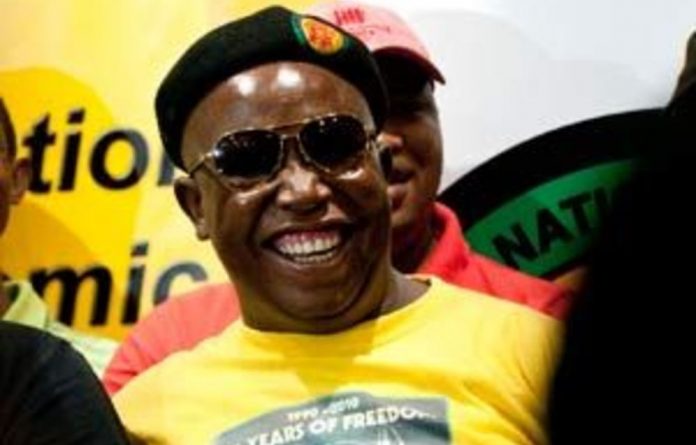 The leadership of the ANC Youth League put their party membership on the line on Monday by vowing to fight disciplinary charges levelled against its executive.

“We are determined and we won’t give up. If this costs us our membership then so be it. There is a saying that he who laughs last, laughs the best — the battle has now begun,” youth league secretary general Sindiso Magaqa told journalists in Johannesburg.

The press conference was held after the youth league hosted an emergency national executive committee meeting this past weekend to discuss the latest developments in disciplinary action against its leadership, which began in August last year.

Youth league president Julius Malema was expelled by the ANC National Disciplinary Committee (NDC) last week after he argued in mitigation of a five-year suspension from the ruling party handed down to him in November.

“We are one. You must not isolate Malema from us. You can try but it won’t happen. The youth are ready to liberate themselves. We aren’t speaking in a tavern but Luthuli House — the revolutionary house,” league treasurer general Pule Mabe said.

League spokesperson Floyd Shivambu and Magaqa also faced the wrath of the NDC, earning themselves three-year suspensions of which Magaqa’s was suspended.

The suspensions relate to comments made by Shivambu about regime change in Botswana as well as insulting a journalist while Magaqa’s is for undermining the authority of Public Enterprises Minister Malusi Gigaba.

The league said the trio represented the views of the youth league and should not be singled out.

“We are going to follow the relevant process and appeal everything. Starting with the disciplinary appeals committee, then the national executive committee if that fails and finally end up at conference in Mangaung if necessary,” Magaqa said.

This is the first time the league has formally announced it would fight the disciplinary action levelled against Malema through to the Mangaung ANC elective conference later this year.

As per section 11.3 of the ruling party’s constitution, an elective conference is granted the power to “review, ratify, alter or rescind” any decision taken by the ANC or its constituent bodies.

But, there are a couple of steps the league must follow before reaching that stage though.

This will begin by lodging an appeal by March 14 with the national disciplinary committee of appeals, headed by Cyril Ramaphosa.

If that appeal fails, they would then turn to the ANC’s NEC.

Although the NEC does not have the power to formally quash charges against Malema, they could instruct the NDC to hear the case again.

“We are determined and we won’t give up. If this costs us our membership then so be it. There is a saying that he who laughs last, laughs the best — the battle has now begun,” Magaqa said.

Although the league has on several occasions said it would defy any suspension or expulsion handed down to its leaders, the young lions again called for a meeting with the ANC to “solve the matter politically”.

“The ANC has never tried to engage with the league, even though we submitted ourselves to all disciplinary processes. We are still prepared to have that meeting and resolve these matters internally,” Magaqa said.

Malema did not make any comments during proceedings and sat cross-armed, wearing a black beret and a Nelson Mandela “Economic Freedom Fighter” T-shirt with his black aviator sunglasses.

In a show of support for their president, several provincial chair people and miscellaneous members of the league’s NEC were also present at the meeting — all echoing the call for a meeting with the ANC.

North West’s chair Papiki Baboile underlined unity within the league’s position: “These policies are taken as a collective,” he said. “The ANC must understand that.”

“The matters our leaders are charged for are political and require a speedy political solution,” said the league’ chair in the Eastern Cape, Ayanda Matiti. “These charges against the youth league are tantamount to killing the ANC itself.”

“Charges or no charges, Limpopo supports Malema and the current leadership of the league,” said that province’s chair, Frans Moswana.

“The ANC must convince us as a collective that the ANC Youth League has done wrong,” said the Northern Cape’s Shadrack Tlhaole. “Until then we reject the suspensions.”

There were also attempts to dispel rumours Mabe is attempting to take Malema’s job by rallying behind the scenes for the league to accept Malema’s expulsion.

“Media detractors should altogether stop using my name to drive divisions within the ANC Youth League, because such attempts will never succeed. I am committed to the struggle for economic freedom in our lifetime and will never sell out the revolution,” Mabe read from a prepared statement.