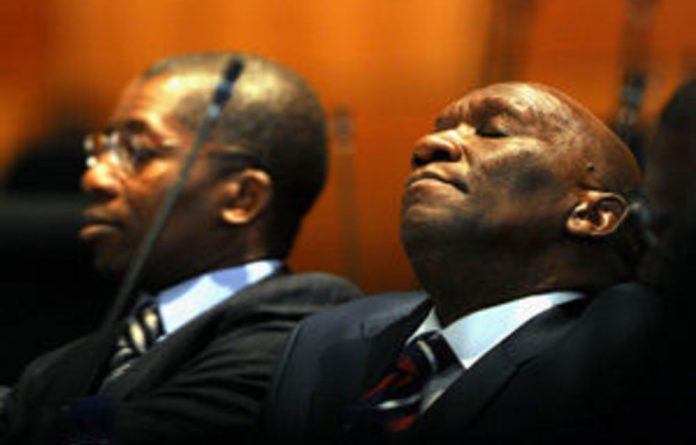 Suspended national police commissioner Bheki Cele came under scrutiny on Wednesday when he took the stand on the third day of an inquiry into misconduct allegations against him.

Cele said he had come close to signing a R3-billion public-private partnership deal for the construction of new police headquarters at a site in Pretoria.

Being from Durban, he was fairly new in Pretoria when his former deputy and procurement head Hamilton Hlela encouraged him to sign the contract on the bonnet of a car.

At the time, the police were on a month-to-month lease at Wachthuis, which had inadequate space.

Cele said accommodation had been discussed a long time before he was appointed commissioner by President Jacob Zuma in July 2009.

The urgent need for accommodation was triggered by the 2010 World Cup, as an efficient and effective communications team needed office space, he said when asked by evidence leader Viwe Notshe why he had approached a senior police official about the accommodation issue.

Dubious person
He described how, three weeks after he took office, Hlela proposed that he sign the contract to build new headquarters.

After applying his mind, he decided not to sign and considered building a new police station instead. He said he had considered the fact that only four police stations had been built in KwaZulu-Natal since 1994.

“Hlela said to me the PPP [public-private partnership] wouldn’t like that.”

Cele portrayed Hlela as a dubious person who had gone behind his back and made decisions without informing him.

“There are many other things I can tell you [about him].”

Cele said a few weeks after the PPP contract fell through, Hlela wanted him to sign an R8-million contract to renovate his office and that of the ministry. This also fell through.

He said this and other incidents that followed led to him approaching the Special Investigating Unit to probe the police’s procurement department.

Derailed plans
Earlier Irene Nel, a senior public works department official, derailed a promise by Notshe that she would testify that Cele identified the building.

“I don’t know who from the South African Police Service [SAPS] identified the building,” admitted Nel during questioning by Cele’s attorney Vincent Maleka.

Maleka responded: “I am glad you don’t know because someone suggested at the opening of the inquiry that it is General Cele who identified the building.”

Questioning surrounded compliance or non-compliance with supply-chain management prescripts in a planned lease for the Transnet building in Durban.

The cross-examination drew snide remarks from the defence.

Voicing concerns
Maleka focused on an email written by Nel in 2010 in which she voiced concerns that police had already identified the Transnet building as alternative accommodation — a job which fell under the duties of the public works department.

Cele was suspended by President Jacob Zuma in October last year, after public protector Thuli Madonsela found that the flamboyant police commissioner had acted unlawfully during the procurement of two leases — the Sanlam-Middestad building in Pretoria and the Transnet Towers in Durban — valued at R1.6-billion.

The inquiry, in its third day, is hearing evidence to determine whether Cele acted corruptly or dishonestly, or with an undeclared conflict of interest in relation to the two police headquarters leases.

The inquiry will also seek to examine Cele’s fitness to hold office.

Overstepping the mandate
Maleka dismissed an apology from Nel for her late arrival by asking her why she had not been present at the beginning of proceedings on Monday. She responded that she was only asked to attend on Tuesday.

At the time the police’s needs assessment — signed off by Cele — had concluded that the unit needed to be centralised. Nel was removed from the police’s portfolio shortly after raising these concerns.

Madonsela’s report last year found that “according to Mr [Siviwe] Dongwana … [Cele] regarded Ms Nel’s enquiries as meddling in the affairs of the SAPS and further stated that she was running his department for him.”

However, Maleka put it to Nel that Cele had nothing to do with her removal.

“General Cele was concerned that your email suggested to him where the units should be, as that was his function and duty. You seemed to be troubled way beyond your mandate where the FCS unit should be located.”

Nel responded, saying that it was part of her job as a “facilitator” to raise concerns. — Sapa, staff reporter