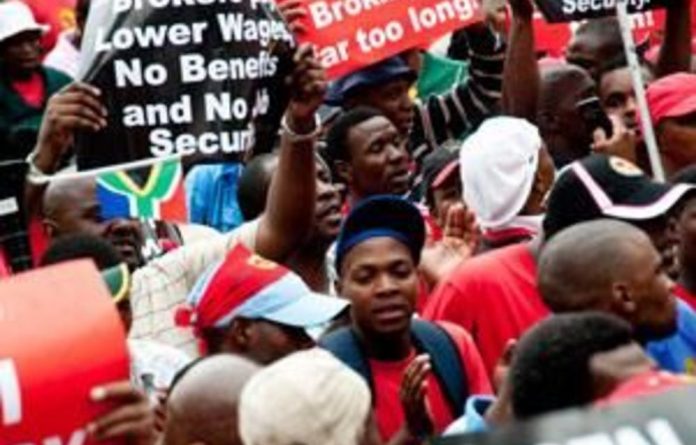 The protest action by the Congress of South African Trade Unions (Cosatu) on Wednesday was beyond the narrow issues of labour brokering and the e-tolling system — it was more about class struggle, its general secretary Zwelinzima Vavi told thousands of marchers in Johannesburg.

The nationwide march nearly brought the economy to a standstill as thousands of workers heeded the union federation’s call to strike — regarded as the biggest since 1980s.

Expelled ANC Youth League president Julius Malema stole the limelight as the majority of marchers cheered “Juju, Juju, Juju” when he arrived. Although Malema was not initially on the list of speakers, Cosatu leaders were forced to give him the stage to address marchers who impatiently chanted his name.

Accompanied by the youth league’s secretary general Sindiso Magaqa, Malema later led workers into song, including his favourite Nomabasedubula siyiya phambele (even if they shoot us we’re going forward).

Cosatu’s strike was seen more as a political show of strength ahead of the ANC’s policy conference in June and the elective conference in Mangaung in December.

While Cosatu played a crucial role in the election of Jacob Zuma as ANC president in 2007, the labour federation has become increasingly frustrated with the ANC’s failure to implement Polokwane resolutions, which called for radical policy changes.

Although Cosatu differs with the ANC on policy direction, the federation became much closer to the league over the past few months on policy issues, including the nationalisation of mines and other key sectors of the economy.

While the ANC and the government are pushing for the amendment of labour laws to ensure stricter regulation to address labour brokers and the prohibition of certain abusive practices, Cosatu and the youth league called for the total ban of labour brokers.

Vavi told workers that leaders of the liberation movement did not struggle so that only the elite could benefit.

It was a clear reference to President Zuma and other ANC and government leaders opposed to radical policy changes which Cosatu said would reduce the level of poverty and unemployment.

Vavi criticised the ANC government for pushing ahead with the tolling system against the will of the people.

“We defeated apartheid but our government is introducing apartheid through [the] tolling system. This is our tax. The government tells us there is no money but they spend billions on tenders. There is no adequate transport system in the country. Thirty percent of the population use their own cars and that is me and you, not the elite,” said Vavi.

Vavi added that 60% of the population used taxis, but “we know they are moving coffins, like Thabo Mbeki said”.

Political freedom
“Instead of improving [the] transport system, they [government] introduce [the] Gautrain which caters for the elite,” Vavi said. “We came to fire the first salvo. If they insist we must pay, we are saying to them, just as we defeated apartheid, we will defeat you,” sad Vavi.

He said Cosatu was disappointed by the ANC statement released by the party’s spokesperson Jackson Mthembu on Tuesday, questioning the motives behind Cosatu’s march. “Comrade Jackson says we are exaggerating our poverty. We are saying to the ANC on this issue you are wrong,” said Vavi to a loud applause.

Vavi said although the majority of people in the country enjoyed political freedom, they could not say the same in economic terms.

“We have political freedom but economic jewellery is residing somewhere, not with us. South Africa is one of the poorest countries in the world. Our wages are very low. Forty four percent survive on R10 a day. This buys you a loaf of bread a day. Over 50% are below the poverty line and 25% go without food. In many families many men stay in bars to drink all night so that they can’t hear the sound of a child dying of hunger. Inequality [in the country] is growing,” said Vavi.

The ANC reacted angrily to Vavi’s statement that the ANC said Cosatu was exaggerating poverty.

“Cde [comrade] Vavi claims that in a statement released by the ANC on March 6 2012, the ANC said. ‘Cosatu is exaggerating poverty of workers in South Africa’.”

“At no stage were such sentiments expressed in any ANC statement, nor did any ANC spokesperson, including, Comrade Jackson Mthembu express such sentiments. In the statement the ANC released yesterday, it said ‘ … the ANC is of the view that the concerns raised by Cosatu on the negative impact of tolling of roads on people who are earning less is over exaggerated, especially after government intervention on the matter’. The ANC statement issued yesterday is not suggesting or downplaying the level of poverty that besieges our country and ultimately affects the majority of our people including workers, as Cde Vavi’s mistakenly seems to suggest,” Mthembu added.

“We are currently studying Cde Vavi’s statement during the protest action and we will respond to his comments in appropriate forums of engagements with our alliance partners,” he said.

Strong turnout
Cosatu appeared to have mustered wide support for its countrywide strike as supermarket group Pick n Pay said over half of its staff did not report for work because of the strike.

“Between 50 to 70% of Pick n Pay staff across all regions did not report to work,” said Neal Quirk, operations director of the company.

The South African Clothing and Textile Workers’ Unions (Sactwu) claimed around 62% of all clothing, textile, footwear and leather workers around the country took part in the strike.

Although concerns had been raised about the impact of the march regarding health and education, health departments across the country said they were mostly unaffected.

“The reports we have received are that staff showed up for work across the province,” KwaZulu-Natal health spokesperson Chris Maxon said.

Mpumalanga health spokesperson Dumisani Mlangeni said: “We have had some administrative staff not reporting for work, but it is minimal and has no effect on our operations.”

Democratic Alliance Gauteng health spokesperson Jack Bloom said he had not had reports of any health facilities being affected, and the Western Cape health department’s spokesperson Helen Rossouw said that 29 out of 29 000 employees in that department took part.

“Health care is an essential service and health care practitioners understand this. Things are running as usual and we have not heard any complaints,” he said just before 1pm on Wednesday.

Education
Eskom spokesperson Hilary Joffe said that by early Wednesday afternoon the electricity utility had received no reports of strike affects, but would receive a full update later on Wednesday.

There was a mixed response from the education sector, with most schools in the rural areas and townships of Limpopo affected. Schooling was mostly normal in the Northern Cape.

“Teachers and learners are at schools in most of the districts,” the province’s education spokesperson Ohentse Stander said.

Provincial education minister for the Western Cape Donald Grant said less than 2% of teachers had participated in the strike there and it seemed no pupils had marched.

In Khayelitsha and Gugulethu, in Cape Town, pupils were told to go home by their teachers, according to news from the South African Broadcast Corporation.

In the Free State’s five districts, only schools in Fezile Dabi, in the north, were affected, with 90% of the schools there closed.

“We are still waiting for reports from the other three districts. Our indication is that there were schools in the rural areas and townships that were affected.”

Normal procedures
Eastern Cape education department spokesperson Loyiso Pulumani said he had not received a single report of a school closure or disruption.

“I am still waiting for the official report, but it seems like everything proceeded as normal.”

Mining company Gold Fields said about 85% of its workforce did not arrive for work on Wednesday. But most workers at Impala Platinum did arrive for work.

The South African National Taxi Council said it would not strike because as registered public transport providers, they would be exempt from the toll fees.

The Federation of Unions of South Africa (Fedusa) said it was opposed to tolls, but believed the matter should be settled within the labour market chamber of the National Economic Development and Labour Council.

Fedusa said it was not opposed to labour brokers and said banning them would cause job losses. It preferred tighter labour laws. — Additional reporting by Sapa.