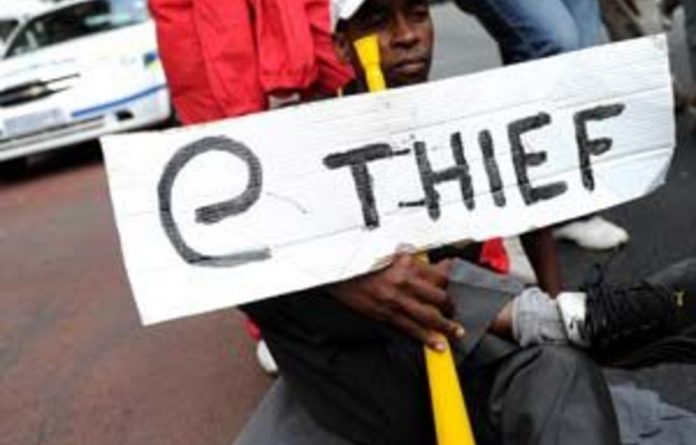 Cosatu general secretary Zwelinzima Vavi warned the government on Wednesday that the labour federation would not permit e-tolling to go ahead, as it would “drive poor people off our highways”.

He was addressing tens of thousands of Cosatu protesters — a crowd that some police officials said was the largest mass action to take place in Johannesburg since the 1980s — before handing over a memorandum of demands to Gauteng transport minister Ismail Vadi and premier Nomvula Mokonyane outside the latter’s office in the Johannesburg CBD on Wednesday.

“The majority of our poor use these highways cos there is no other alternative. [The government is] telling us to tighten our belts but our belts are already on the bone. It’s enough now,” he said.

“So we are here to fire our first warning shot, and we’ve got lots of bullets!”

“I accept this memo,” said Mokonyane. “But we must talk about our issues.”

In the memorandum, Cosatu says the the private operator of the controversial toll system is going to “milk” the public.

“All the evidence indicates that the revenues from the tolls are going to be enormous, and that the loans will be paid off quickly, leaving the private operator to milk the public,” the memorandum reads.

Demanding the dismantling of the 42 toll gantries already straddling the N1, N3, N12, and R21, Cosatu said if more money was put into stopping fraud and corruption, government would easily have enough to fund road construction and maintenance.

According to the memorandum, the trade union federation is opposed to the tolls for the following reasons:

“This is not a free choice. It is because our public transport system is expensive, unsafe, and unreliable,” the memorandum reads.

Besides the Bus Rapid Transit System put in place in Johannesburg and Cape Town, there had not been any new subsidised bus route in over 10 years, Cosatu said.

Cosatu also said that having the private sector operate the toll roads is the same as privatisation, which the federation opposes.

“We pay taxes so that government can build and maintain roads, hospitals, schools, etc.

“For all of the above reasons, we demand the dismantling of the Gauteng motorway gantries, and the immediate halting, for good, of the Gauteng open tolls.” — Additional reporting by Sapa