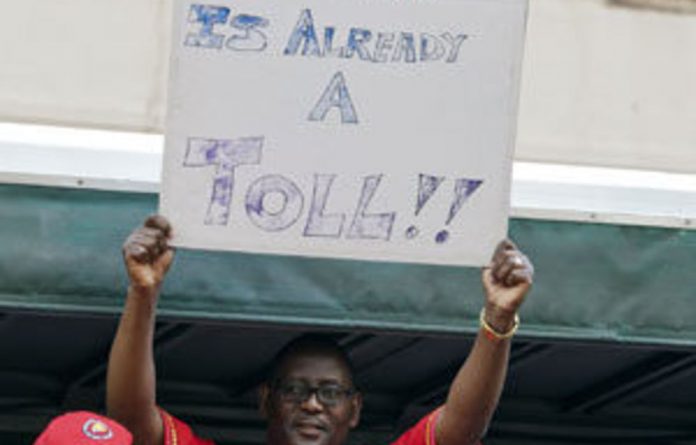 In combining its demand for the banning of labour broking services with the demand that urban freeways remain free of tolls, Cosatu had hoped to attract a new audience out of the suburbs and onto the streets at its strike on Wednesday. And with ANC Youth League president Julius Malema joining the march, the opportunity was there to appear relevant to disaffected and unemployed young South Africans.

But data gathered at the Johannesburg march showed that its success in the former instance was marginal, and the organisation’s apparent preference for militancy may yet nip any broader appeal to this constituency in the bud.

Although Cosatu’s Cosatu’s general secretary, Zwelinzima Vavi, expressed his happiness at the participation of white people in the biggest protest march, in Johannesburg, it was not exactly a mixed affair. White people made up no more than 3.5% of marchers, even early on, and that proportion fell swiftly as overall numbers swelled during the course of the morning.

Virtually all participants polled by the Mail & Guardian said they were members of Cosatu-affiliated unions, and all but a tiny fraction described themselves as poor. Even so, events at the march as well as survey data showed glimmers of a potential new constituency for Cosatu among young South Africans who are disproportionally unemployed — and therefore not union members — especially if Julius Malema maintains his power base among this young and politically active grouping.

Malema was warmly welcomed up on Cosatu’s stage, twice. His attendance may explain why police rolled out razor wire, behind which they strategically positioned a water cannon truck, in order to protect Luthuli House — the ANC’s headquarters — from the marchers a block away.

Deference to Vavi
None of the nearby provincial government buildings received such treatment, even though several were due to be visited. Had Malema chosen to incite his supporters in the crowd, those precautions may have become necessary. Instead, Malema showed deference to his hosts.

Yet the inclusion of Malema did not preclude sympathy for the workers’ cause from Malema’s traditional enemies, limited though it may have been.

Many of those who identified themselves as middle-class earners said they were primarily concerned about the impact new toll roads would have on their budgets, but most expressed sympathy for at least tougher regulations governing labour brokers, and several expressed outrage at the mistreatment of contract workers.

Cosatu’s strong stance against government corruption also tended to come up spontaneously, indicating that the organisation could, potentially, mobilise non-members on political issues. These sentiments did not change after Malema’s first appearance.

By contrast, other protest actions in recent years have nearly universally been split along race or class lines, or both.

Service-delivery protests are confined to townships; the ANC Youth League has attracted only young people who earn little to nothing; protests against what is now the Protection of State Information Bill featured largely white or affluent crowds, and no union demand for better pay has attract much sympathy outside the confines of the union involved.

The ANC itself has made no attempt to attract anyone other than card-carrying members to a cause, focusing instead on expanding its membership past the one million mark.

Yet Cosatu did not seek to capitalise on its potential for creating a broader church on Wednesday. While Vavi framed the protest as an occupation, putting it in an international context that would resonate with any in the middle class who lean slightly left of centre, he also framed it as part of a class war, a war against “white monopoly capital” and, generally, against those who are better off than the lowest-paid workers.

Such militancy went down well with the crowd, and may signal a turning point in Cosatu’s efforts to wrestle the mantle of champion-of-the-poor back from Malema and the youth league. It will do little to make non-union members feel welcome at future Cosatu rallies, however.