Designer with a clear-cut vision 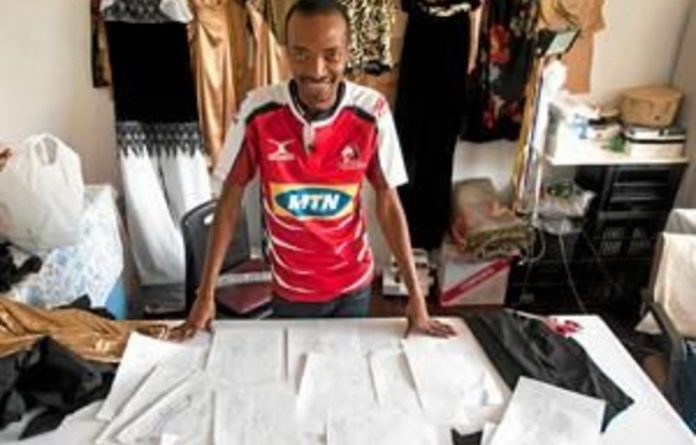 Fashion designer Thula Sindi and I met at his Johannesburg home, a modest apartment on Corlett Drive that doubles as his studio.

In a week he was to showcase his latest collection at Mercedes-Benz Fashion Week Jo’burg, the down-to-earth young designer was hanging out in a Lions rugby T-shirt and jeans — although his relaxed attitude should not be taken for complacency.

The M&G caught up with popular designer Thula Sindi at his studio and workshop to talk about his ready-to-wear collection, showcased at the Mercedes-Benz Fashion Week Jo’burg.

“It’s the first fashion week in a new venue and I am presenting a new collection,” Sindi said about the event that this year takes place at the upmarket Hyde Park shopping centre. “I am ready for this, though I am unexcitable by nature. I consider myself very mellow,” he said.

While steaming a dress, part of the upcoming collection, he talked me through the new line: “I used a black-and-white theme to create a back-to-basics look. For me, it’s about simplicity, subtlety, easy-to-wear and sophisticated clothes. It isn’t fancy. I make clothes that are attractive, modern, with simple details that are well thought out.”

The collection will feature daywear pieces made of pure cotton. The designs are an integral part of Sindi’s journey.

Perennial fashion
“I just got back from India, where I get my fabric from,” he said. “Their fabrics have amazing embroidery. In my view, embroidery is the ‘beading’ of daywear.”

We follow top SA designer Thula Sindi from his studio at home, to model fittings, alterations backstage and the runway, in the days leading up to his big show at the Mercedes-Benz Fashion Week in Jo’burg.

The fashion week has been deemed autumn/winter 2012 but Sindi prefers not to base his collections on seasons and makes clothes that can be worn throughout the year.

He said that “we aren’t living in Iceland so we don’t need a heavy winter collection. The cottons are all lined with cotton voile so they are cool but also warm.”

The collection has been three months in the making and Sindi said his process was one of continuous creation. He was not one for expressing quirky creativity but his ambition was to make clothes that people wanted.

“Designers need to think carefully about what they create and who they are creating it for rather than just about expressing themselves. You don’t express yourself on another person’s body,” Sindi said.

The 28-year-old designer is one of the few to make inroads into big retailers such as Edgars.

His cool-headed business sense is in line with his view of the fashion industry in general.

“I don’t think I like ‘fashion’,” he said. “I like product development. The dress is a product. Everything I showcase I sell.

“At the show I will display some outfits that are already in-store. There aren’t any pieces that are just for the sake of creativity.”

Browsing through the collection, a knee-length, gold evening dress caught my eye.

“It is made with stretched silk. I chose a razorback cut, which adds a sports touch to the piece. It is ­modern, for evenings and very feminine. It’s my idea of contemporary cocktail wear and it should have a nice movement.”

Moving up
It is a great honour for Sindi to be chosen to close Fashion Week, although he described it as a “dubious honour”. “If everything is on time it will be great. Hopefully it won’t be a midnight show,” he said.

Sindi started his own label in 2006 and showed his first collection at the South African fashion week in 2007. He then moved on to platforms in Paris, Hong Kong, Beijing and Abu Dhabi, to name a few.

But he exudes calm. “This is one of the strongest collections I’ve ever done. It’s well designed and well proportioned. Every piece has a reason behind it. It should appeal to a lot of different people but it still has direction. I am confident,” he said.

We follow Thula Sindi in the week leading up to the big night and go backstage with him at the show. Watch the video from Monday.