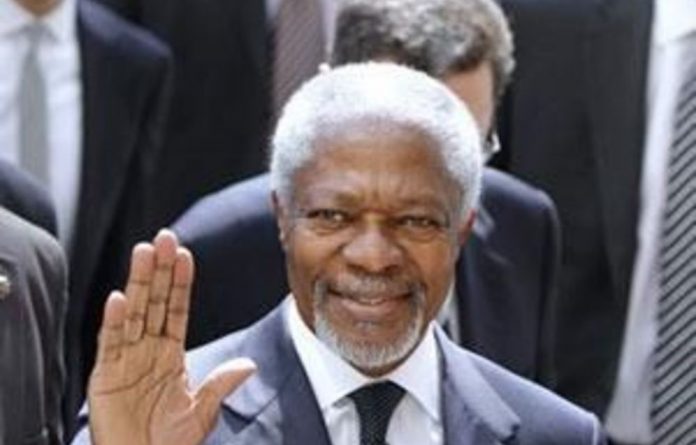 Annan on Saturday made proposals on stopping the violence between security forces and the opposition in the year-old revolt against Assad, access for humanitarian agencies, release of detainees and the start of political dialogue.

The talks were “candid and comprehensive”, a spokesperson quoted Annan as saying. He was to meet Assad again on Sunday before leaving Syria for Qatar.

Assad told UN/Arab League envoy Annan Syria was “ready to make a success of any honest effort to find a solution for the events it is witnessing”, state news agency Sana reported.

“No political dialogue or political activity can succeed while there are armed terrorist groups operating and spreading chaos and instability,” he said.

Thousands have been killed in Syria since a popular uprising against Assad erupted a year ago.

While Annan and Assad discussed the crisis, Syrian troops were assaulting the north-western city of Idlib, a rebel bastion.

“Regime forces have just stormed into Idlib with tanks and heavy shelling is now taking place,” said an activist contacted by telephone, the sound of explosions punctuating the call.

Sixteen rebel fighters, seven soldiers and four civilians were killed in the Idlib fighting, according to the Syrian Observatory for Human Rights, which said 15 other people, including three soldiers, had been killed in violence elsewhere.

Russian Foreign Minister Sergei Lavrov, who met Annan in Cairo earlier in the day, told the Arab League his country was “not protecting any regime”, but did not believe the Syrian crisis could be blamed on one side alone.

He called for a ceasefire and humanitarian aid access, but Qatar and Saudi Arabia sharply criticised Moscow’s stance.

‘Licence for brutality’
Qatari Prime Minister Sheikh Hamad bin Jassim al-Thani, who has led calls for Assad to be isolated and for Syrian rebels to be armed, said a ceasefire was not enough. Syrian leaders must be held to account and political prisoners freed, he declared.

Saudi Foreign Minister Saud al-Faisal said shortcomings in the UN Security Council, where Russia and China have twice vetoed resolutions on Syria, had allowed the killing to go on.

Their position, he said, “gave the Syrian regime a licence to extend its brutal practices against the Syrian people”.

Saudi Arabia and Qatar, which are both ruled by autocrats and espouse a strict version of Sunni Islam, are improbable champions of democracy in Syria. Riyadh has an interest in seeing Assad fall because this could weaken its Shi’ite regional rival Iran, which has been allied with Syria since 1980.

International rifts have paralysed action on Syria, with Russia and China opposing Western and Arab calls for Assad, who inherited power from his father nearly 12 years ago, to quit.

Lavrov told Arab ministers a new UN Security Council resolution had a chance of being approved if it was not driven by a desire to let armed rebels take over Syria’s streets.

The United States has drafted a fresh resolution, but the State Department said on Friday it was not optimistic its text would be accepted by the Council.

France says it will oppose any measure that holds the Syrian government and its foes equally responsible for the bloodshed.

Despite their differences, Lavrov and Arab ministers said they had agreed on the need for an end to violence in Syria.

They also called for unbiased monitoring of events there, opposition to foreign intervention, delivery of humanitarian aid and support for Annan’s peace efforts.

‘There are no armed gangs’
Annan, who later met Hassan Abdulazim, a veteran opponent of Assad.

“Violence should stop and detainees should be released in order to negotiate a transitional period,” Abdulazim said after the meeting. “In the light of violence, killings, arrests and threats there will not be any solution for the crisis.”

The exiled opposition Syrian National Council ruled out talks while Assad is in power.

“Negotiations can never take place between the victim and torturer: Assad and his entourage must step down as a condition before starting any serious negotiations,” it said.

The United Nations estimates Syrian security forces have killed over 7 500 people. Syria said in December that “terrorists” had killed more than 2 000 soldiers and police.

A Russian diplomat said this week Assad was battling al Qaeda-backed militants, including 15 000 foreign fighters who would seize cities if Syrian troops withdrew.

The Syrian opposition denies any al-Qaeda role in the uprising, but Islamists are among rebels who have taken up arms against Assad under the banner of the Free Syrian Army.

“There are no armed gangs, the systematic killing came from the Syrian government side for many months. After that the people were forced to defend themselves so the regime labelled them armed gangs,” he told the Arab League meeting.

US Secretary of State Hillary Clinton is expected to meet Lavrov in New York on Monday when the Security Council holds a special meeting on Arab revolts, with Syria likely to be in focus.

Arab diplomats said Syria had begun pre-emptively withdrawing ambassadors from Europe because it feared EU members would expel them in response to Assad’s crackdown. – Reuters