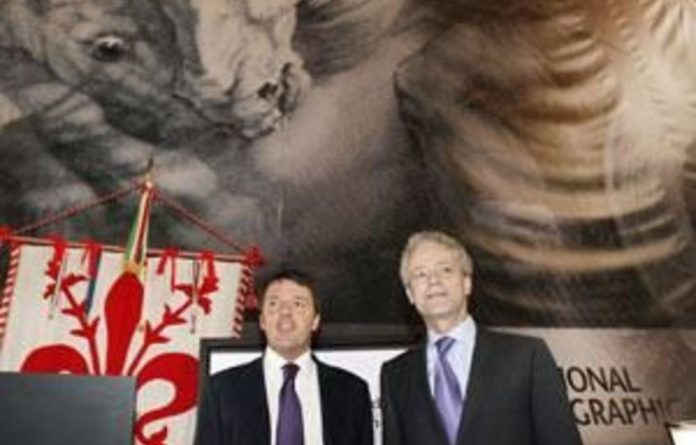 Researchers in Florence, Italy say they are one step closer to proving a lost masterpiece by Leonardo da Vinci, The Battle of Anghiari, is painted on a hidden wall in a cavity in Florence’s town hall, where it has remained unseen for five centuries.

After drilling tiny holes in a fresco painted on a wall which hides the cavity, the researchers inserted a 4mm wide probe and took samples of paint, which they say is similar to that used by Leonardo when he painted the Mona Lisa.

“The evidence does suggest that we are searching in the right place,” said Maurizio Seracini, a researcher who works at the University of California, San Diego, and has believed for decades that after Leonardo painted his monumental battle scene in 1504 it was bricked over.

Seracini’s team obtained permission last year to drill through Giorgio Vasari’s The Battle of Marciano in Val di Chiana, which was painted in 1563 on the wall they claim hides Leonardo’s work in the Hall of 500 in Florence’s Palazzo Vecchio.

The research team’s probe confirmed the existence of an air gap, originally identified through radar scans conducted of the hall, between the brick wall on which Vasari painted his mural and the wall located behind it. “No other gaps exist behind the other five massive Vasari frescoes in the high-ceilinged hall,” the team said.

A sample of black material removed from the back wall was analysed with a scanning electron microscope using energy dispersive X-ray spectroscopy to identify its chemical makeup.

The chemical composition “was similar to black pigment found in brown glazes on Leonardo’s Mona Lisa and St John the Baptist, identified in a recently published scientific paper by the Louvre, which analysed all the Da Vinci paintings in its collection”, the team said.

“Note that Leonardo painted the Mona Lisa in Florence at the same time,” said Seracini, who was featured in Dan Brown’s potboiler, The Da Vinci Code.

Flakes of red material were also found. “Analysis of these samples seems to identify them as organic material, which could be associated with red lacquer. This type of material is unlikely to be present in an ordinary plastered wall,” the team said.

A beige material seen on the original wall using high definition endoscopic images “could only have been applied by a paint brush”, they said.

Art experts have objected to Seracini drilling through the Vasari fresco and one of the fiercest critics said on Monday he was suspicious of the findings.

“These samples were analysed in a private laboratory and not delivered to Florence’s official restoration centre, the Opificio delle Pietre Dure,” said the Italian art history professor Tomaso Montanari.

“All they got was a PowerPoint presentation. If they have results which are truly relevant from a scientific point of view, would it not have been better to send them to the Opificio, then hold a press conference?

“Moreover, there may be paint on the back wall but who is to say it is not part of another painting, not by Leonardo?”

Seracini argued that there was no evidence of other painters working on the space between the time Leonardo painted in the room and the period in which Vasari worked there.

Leonardo completed the centrepiece of his work, which was widely copied — including by Rubens, whose drawing of the scene hangs in the Louvre. But from 1555 the room was renovated and the half-finished painting was lost.

Seracini’s suspicion that Vasari did not want to destroy Leonardo’s work, preferring to brick it up and add his own fresco, were reinforced when he found Vasari had painted a soldier in his fresco holding a flag on which was written: “He who seeks, finds.” —