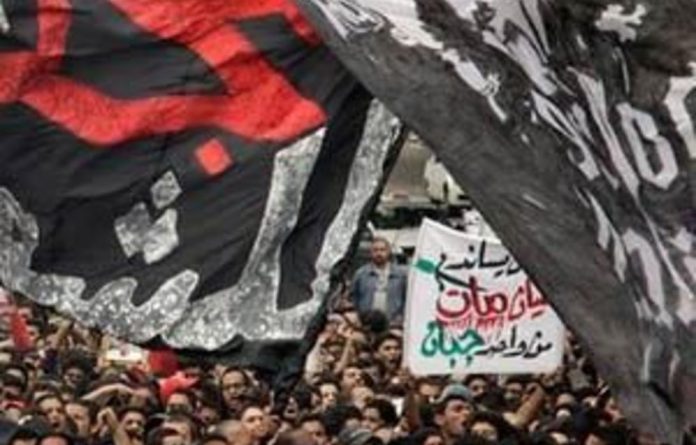 Many Egyptians accuse police of looking the other way while violent crime has spiked in the year since Hosni Mubarak’s ouster in an uprising. But the charges in the Port Said riot went a step further, alleging the police actually aided the perpetrators of the world’s worst soccer-related disaster in 15 years.

The riot set off days of deadly clashes in Cairo between police and protesters, who accused the Interior Ministry of doing nothing to protect fans. The interior ministry oversees the police.

The nine officers, who include six generals and a colonel, are in custody. If convicted, the case would provide the first legal evidence that Egypt’s hated and discredited police are collaborating in violent crime, something that the pro-democracy activists behind last year’s uprising have long claimed.

The police say their situation has become untenable since Mubarak’s ouster, with thousands of criminals who broke out from jails during the anti-Mubarak uprising still at large and armed. They say the nation’s economic crisis, high unemployment and an increased flow of firearms from neighbouring nations are pushing crime rates even higher.

Additionally, the police complain that many Egyptians have become overly sensitive to police’s use of force against violent crime, while longing at the same time for the restoration of security.

But Magda Boutros, a criminal justice expert at a leading Egyptian rights group, said there has been no genuine reform of the police force since Mubarak’s authoritarian regime fell.

Killing frenzy
“There has been a great deal of talk that the police today are different from the police a year or more ago but there have really been no actual steps in that direction,” she said.

The February 1 riot began minutes after the final whistle in a league match between Cairo club al-Ahly and al-Masry of Port Said. The home side won 3-1 but its fans set upon the rival supporters, invading the pitch and running the full length of the field before they reached al-Ahly fans.

Video clips posted on social networks show dozens of riot police armed with batons and shields standing by as the violence broke out.

The killing frenzy that ensued lasted 30 minutes, with fans getting thrown to their death off the stadium walls, killed by explosives as they tried to flee through a narrow corridor or clubbed to death.

In all, 75 people were charged on Thursday in connection with the carnage — more than 60 of them fans.

The prosecutor general alleged the nine police officers participated in the Port Said killings by way of “assistance” to al-Masry fans. They said the officers, along with several al-Masry officials, knew in advance that the home fans planned to attack al-Ahly supporters, yet they intentionally allowed them to enter the grounds without searching them for weapons as is customary in soccer matches.

Maintaining public order
The police officers also allegedly allowed al-Masry fans to exceed by about 3 000 the maximum number authorised to attend the game and that many of them were criminals known to the local police.

“Those from the police among the defendants failed to take any measure provided for in the laws and the Constitution to maintain public order and safety and protect lives and property,” the prosecutor general said in a statement.

It said the charges were based on video footage of the riot, the confessions of suspects and the testimony of at least 700 people who have been questioned. It said the killing of the protesters was planned in advance and that the culprits prepared for the massacre with knifes, rocks and explosives. Fans from the two teams have a history of animosity.

The accused police or their lawyers have not commented on the charges.

The riot shocked soccer-crazy Egypt, deepening the sense of uncertainty felt by many as their nation continues to be roiled by unrest and instability a year after the uprising. Some see charges against such high-ranking police officers as lending credence to persistent claims that the police were largely to blame for the precarious security in Egypt over the past year.

Police have yet to fully retake the streets after they melted away in yet-not-fully-explained circumstances four days into the 18-day popular uprising that toppled Mubarak.

Exasperation with police brutality was one of the root causes of the uprising and many rights activists suspect the police’s apparent reluctance to restore security is pay-back for their humiliating defeat in the face of millions of unarmed protesters.

Purging the police
Rights activists have been charging that the interior ministry has not gone far enough with reforms.

Interior Minister Mohammed Ibrahim reacted angrily to calls by lawmakers for “purging” the police force, telling Parliament on Tuesday that he personally objected to the use of the word and reminded everyone in the chamber that policemen were dying or getting hurt every day in the line of duty.

Curiously, none of the dozens of police officers who have been tried on charges of killing protesters during the uprising have been convicted, something that some rights activists attribute to the weakness of the prosecution’s cases, while others say it just shows that the old system is still largely in place.

“The resistance to reform is not unique to the interior minister,” said rights lawyer and activist Negad Borai. “The entire regime is resisting reform as a policy.”

He was alluding to claims by pro-democracy groups that the generals who took over from Mubarak are an extension of the former regime under which they rose to the very top of the military hierarchy.

Among those charged is the chief electrical engineer of the Port Said stadium. Numerous witness accounts said that power inexplicably went out at the venue minutes after the final whistle. The darkness, according to witnesses, helped the assailants to attack with impunity.

On Thursday, thousands of al-Ahly fans staged a sit-in outside the office of the nation’s top prosecutor, Mahmoud Abdel-Maguid, to protest what they said was the delay in filing the charges and to demand swift justice. Many of the Ultras wore the red jersey of the club, possibly the most popular in Egypt. — Sapa-AP