Ratanda, Grabouw, take their demands to the streets 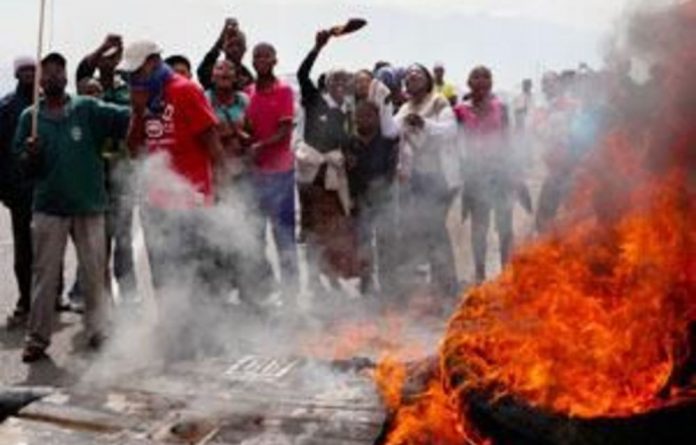 Residents in Grabouw in the Western Cape were demanding better school infrastructure, and protesters in Ratanda outside Heidelberg in Gauteng, incensed by having power cut off for nonpayment, demanded cheaper electricity.

Though both protests resulted in damage to property, only minor injuries were reported.

In Ratanda, which does not have a recent history of protest, residents alleged over-charging and fraud in their municipality’s delivery of electricity to the township, and said they had been treated with disrespect when they had tried to raise their issues.

Several hundred people partially blockaded the R549 road between Heidelberg and the Vaal Dam for much of the day, and two houses and two municipal buildings were burnt down, despite the latter being just 10m from the local police station. At least one shop in the township was looted.

‘Too poor to pay so much’
“We want Nersa [the National Energy Regulator of South Africa] here, to come tell us what is going on,” said James Buthelezi, an organiser with the Ratanda Community Forum. “We want this cutting-off of power stopped, then we want to buy direct from Eskom. People here are too poor to pay so much.”

Similar demands have come out of Soweto and other townships in Gauteng since 2011, when steep electricity tariff increases kicked in. An average 16% increase in prices is due at the beginning of April, although some local authorities have already increased the effective price to consumers to an even higher rate.

Some residents in the township brandished paperwork they said showed they had been disconnected from the power grid despite paying what they owed, and more.

Police response
Some of the dozens of police deployed to quell the violence expressed sympathy with their cause, but that did not prevent them from using water cannons and tear gas to disperse protesters throughout the day.

As the sun set, large groups of people continued to march through the streets, occasionally challenged by police, and a semi-porous roadblock was enthusiastically if thinly manned.

Many residents who spoke to the Mail & Guardian vowed to keep up the protests until they received a satisfactory answer from either local or provincial government. Representatives of neither could immediately be reached for comment.

Police said they had arrested five people for arson and public violence, and said on Tuesday morning that shops in the area belonging to foreigners had been looted.

In Heidelberg itself the only visible impact of the protest was low worker turnout at many businesses, and factory owners said they would have trouble making up for lost production. Traffic on the N3 highway that passes near the town was not affected.

School storm
In Grabouw, residents of the Slangpark and Chotzoben informal settlements temporarily blockaded the N2 highway, and the provincial government said schools had been vandalised and private property damaged.

Protesters, many identifying themselves as sympathetic to the Elgin Grabouw Civic Organisation, said the Western Cape government had not done enough to alleviate overcrowding at local schools. The area has seen several weeks of disruption of schooling, protests, and arson.

Western Cape provincial education minister Donald Grant came out fighting on Monday, accusing the organisation of ignoring the facts and progress in providing additional classrooms in favour of scoring a political point.

In both Ratanda and Grabouw, protesters threatened to make their communities ungovernable. — Additional reporting by Sapa

The PPE bonanza and how ‘flukes’ made people millions

More than R10-billion has been spent on PPE. But healthcare workers say they are not getting enough masks and other gear to keep them safe from Covid-19. Sarah Smit, Paddy Harper and the M&G Data Desk dug into the numbers
Read more
Coronavirus