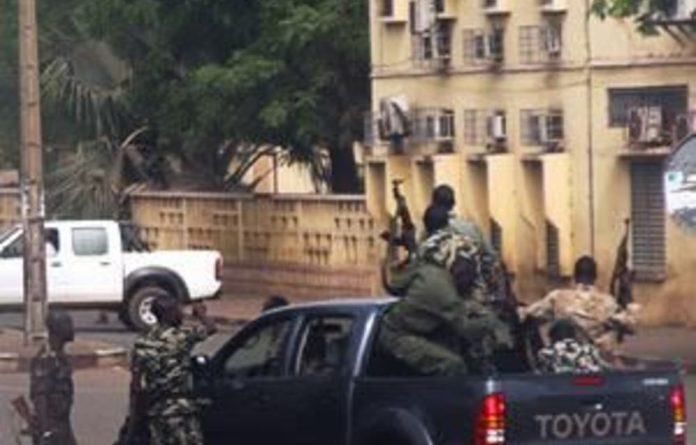 Renegade Mali soldiers said on Thursday morning they had seized the presidential palace and arrested several ministers after a gun battle, in an apparent coup bid in the west African nation.

“We are in control of the presidential palace,” one of the rebels told Agence France-Presse on condition of anonymity. He said Foreign Minister Soumeylou Boubeye Maiga was among those held by the officers.

The mutineering soldiers attacked Mali’s presidential palace overnight as a protest over the government’s handling of a nomad-led rebellion in the north turned into an all-out attempted coup.

Sporadic heavy weapons and tracer fire rang out around the the capital Bamako through the night and the mutineers, who say they lack arms and resources to face a separatist insurgency in the Sahara, temporarily forced the state broadcaster off air.

“We now know it is a coup d’etat that they are attempting,” a defence ministry official said, asking not to be named.

‘Settle grievances democratically’
The official said President Amadou Toumani Toure, who has long said he will relinquish power after elections scheduled next month, was in a secure location but gave no more details.

United Nations secretary-general Ban Ki-moon called for calm and for grievances to be settled democratically.

Programmes on state television were interrupted after the mutinous soldiers blocked access routes to it. It was not clear to what extent they were in control of the building when it came back on air late on Wednesday.

“In a moment, there will be a statement by the military,” read a brief message, displayed against a backdrop of traditional Malian music and dance.

Anger has grown in the army at the handling of a Tuareg-led rebellion that has killed dozens, forced some 200 000 civilians to flee their homes and exposed Bamako’s lack of control over the northern half of a country twice the size of France.

In a sign of spreading support for the mutiny, two military sources in the northern town of Gao confirmed the arrests of several senior officers in the town, a regional operations centre.

‘Take the palace’
Soldiers have for weeks appealed to the government for better weapons to fight the rebels, who are bolstered by fighters who had fought in Libya’s civil war last year. But many mutineers said they now wanted to oust Toure himself.

“He needs to leave power, that is all. The movement will only stop with the taking of the palace,” said one sergeant, who asked not to be named. Other soldiers toured Bamako shouting anti-Toure slogans.

There was no word from Mali’s presidency. Statements posted by its official Twitter account earlier in the day said there was no coup attempt.

“These people are tapping into frustrations of the population,” said one Bamako-based diplomat of the mutiny. Bamako residents reported cases of the military requisitioning vehicles in the streets.

Bamako was briefly paralysed last month as hundreds of Malians put up street barricades and burned tyres in the streets to protest at the government’s handling of the rebellion.

‘Respect constitutional order’
The situation in Mali was raised during consultations at the UN Security Council on Wednesday, British UN Ambassador Mark Lyall Grant said, adding that council members appealed for calm and “respect for the constitutional order”.

Toure, in power since 2002, has said he is planning after April elections to hand over the reins of a country known for its gold, cotton and a once-flourishing desert tourist industry now undermined by a spate of hostage-takings by al-Qaeda allies.

The former paratroop commander overthrew a dictatorship in a 1991 coup and relinquished power a year later before returning to office via the ballot box.

A military source said a trigger for Wednesday’s events was a visit by the defence minister to a barracks in the town of Kati about 20km north of Bamako.

“The minister went to speak to troops but the talks went badly and people were complaining about the handling of the crisis in the north,” the source said.

Tuareg fighters seeking to carve out a desert homeland in Mali’s north have made advances in recent weeks, including the seizure this month of the key garrison town of Tessalit by the Algerian border.

The MNLA rebel movement has been bolstered by heavily armed Malian Tuareg returning from fighting with Libyan forces who tried in vain to prevent Muammar Gaddafi’s overthrow last year.

The clashes have added a new layer of insecurity to a zone awash with smugglers and plagued by fighters linked to al-Qaeda and is expected to complicate presidential elections in April. — AFP, Reuters

Mali in presidential runoff in shadow of security crisis