Why SA is burning: Power to the people still a pipe dream 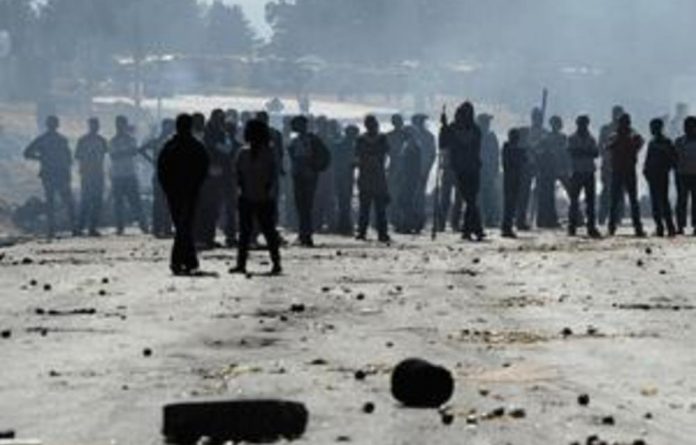 Sharpeville was probably justifiably angry because it did not get star billing on Human Rights Day (previously Sharpeville Day) on Wednesday. Evaton suspected witchcraft.

Hangberg demanded the right to feed itself from the sea. Grabouw wanted a new school. Kya Sands promised trouble unless it got water, roads and a sewerage system.

It was, in short, a remarkably busy start to this year’s protest season, suggesting that there are many running battles with police to come before the season ends in November.

The surprising thing, though, was not the number and heat of this week’s service delivery protests, but the wide range of issues that got the tyres burning. Because it will almost certainly not be many different concerns that will make 2012 a record-breaking year for protests, but just one: the cost of electricity.

Service delivery protests have developed some broad rules over the past three years, a formula to which the majority adhere. Regardless of how they start, they end in burnout. At some point, usually after three or so days, those who were manning the barricades, patrolling the streets and battling the police simply run out of steam. They never get what they want — because the houses or water infrastructure or other services they want could not be produced out of a hat, even with the best will in the world — and they rarely even get promised exactly what they want. They just stop.

Protesters feel disrespected
The period just before the end also has a pattern. As the anger burns away, so do the numerous and sometimes conflicting demands. Protesters stop talking about tangible needs and instead start talking about disrespect. They talk about how those in authority never listen, about street power versus political power and about the inevitable victory of the masses with a just cause.

Sometimes there is blood, but not always.

Despite these uncertainties, even this middle part has near-universal truths. The closest thing to a major road is made impassable to gain attention.

Ersatz traffic calming is implemented throughout the township, nominally to impede the movement of police vehicles, but also to assert dominance over these public spaces. Mothers will take to the streets during daylight, but by the time it is dark it is mostly young blades who are in charge. Looting and the worst injuries tend to come after nightfall.

It is only really at the beginning of service delivery protests that they have historically become difficult to compare and plot. In some communities there is a genuine groundswell of anger; in others there is definite prodding from politically minded leaders. The amount of patience communities have and the length of time they will collectively spend delivering memoranda and sending delegations differ wildly.

Electricity a main catalyst
But, increasingly, at least the root cause of the unhappiness will become easier to predict. Events this week notwithstanding, electricity prices will become the reason most people take to the streets most often.

The trend started to show in 2011 with protests in places such as Chiawelo in Soweto and Tembisa on Gauteng’s East Rand. This week, in Ratanda just outside Heidelberg, the demand was exactly the same: let us buy our power directly from Eskom. Cut the local authority out of the loop so that we can get it cheaper.

The margin local authorities add to electricity prices varies, but has been increasing as virtually all municipalities struggle under demands for money to maintain existing infrastructure and roll out new systems. But even the base price those authorities are charging has far outstripped the increases in social grants, the primary and sometimes sole source of income for many.

In the 2012 financial year, the average increase in the three major types of grants (pension, child support and disability) is 4.74%, dropping below a 6% increase for the first time since 2010. In the same year the price local authorities pay for electricity will increase by 16%. Previous experience shows the difference will hurt, especially as township residents say they cannot cut down on usage any further.

“We pay the same money we did before, but we can’t cook all our food before it runs out,” a Chiawelo resident said last year.

“These people, they say I owe them all this money, but my family doesn’t even use hot water anymore,” a Ratanda dweller complained this week. “We only cook on electric. I have to cook. Where must this money come from?”

We do not yet know what the electricity rate increase will be in 2013, but we know social grant increases will not even come close to equalling it and that those dependent on grants will not be able to reduce the amount of electricity they use much further. The pressure can only build. It will be no surprise when discontent increasingly spills out on to the streets and starts to outweigh all other problems combined.

Denis Goldberg was a forthcoming, funny, angry, brutally honest and impressive man who never stopped fighting for what he believed in
Read more
Coronavirus

Under a state of national disaster, some rights may be suspended. But it is critical to remember that the Constitution itself is not suspended
Read more
Business

New research shows that while South African organisations have made strides in achieving greater diversity and transformation, too many people still feel excluded in workplaces – and this has significant consequences for productivity and company performance
Read more
Opinion