Taking back Jo’burg, one pace at a time 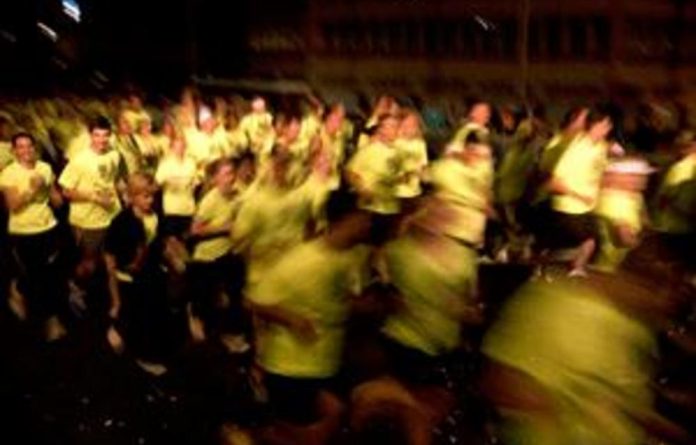 The joke goes that if you are running in the city, someone must be chasing you. On Wednesday night, however, 10 000 people ran a 10km rectangle through the Jo’burg inner city, causing terminal gridlock from which we may never recover.

Sponsor Nike made much of “taking back the city” and running where one would not normally do so, which, as it happened, turned out to be true.

Pedestrians and joggers are usually at the bottom of the city’s pecking order. Taxi drivers are the princes and it was gratifying to see them — for once — stalled and leaning on their horns at intersections as metro cops held back the traffic.

All entrants were issued with luminous yellow running shirts and those towards the back spoke of seeing a stripe of yellow running down the Nelson Mandela Bridge as the race kicked off at 7pm.

The runners headed south and turned left past The Star‘s offices in Sauer Street and then went all the way across town up Market Street. Jo’burg is a mining town: Past Von Wielligh, Delvers and the bracing smell of urine; past Goud, Nugget and then the Troyeville Hotel and, a little further on, past my favourite shebeen, the Troyeville Entertainment Centre. The regulars were on the street, shouting encouragement and slapping hands with runners.

The race then turned at Bertrams and began the cruel climb back into Hillbrow, past the Ellis Park and Johannesburg stadiums, then under the Joe Slovo bridge and past Ponte. Then it was into Twist Street before a steady climb up and past Constitution Hill.

The crowd was the thickest in Hillbrow, spilling out into the streets. Some watchers puffed on joints and the clouds of savoury smoke from chisa nyamas (braais) wafted over the runners.

Balconies were full and one woman shouted: “Haai wêna, umlungu! (Hey you, whitey)”. Another bystander wondered aloud why we were not taking the Rea Vaya bus.

It was all downhill from there — past the statue of miners forever chiselling rock near the Civic Centre, over the Braamfontein railway lines and then back to Mary Fitzgerald Square.

The atmosphere — or, in road-running parlance, “vibe” — made the runners feel part of the city, a sentiment not shared by Pan Africanist Youth Congress spokesperson Sello Tladi, who claimed the night race was an insult to those who perished on March 21 1960 in the Sharpeville massacre, the reason for the day’s dedication as Human Rights Day.

“[Those] who want to have fun and run like headless chickens in the streets of Johannesburg should rather choose to do so on Valentine’s Day or Mandela Day,” said Tladi.

See you next year, Sello.