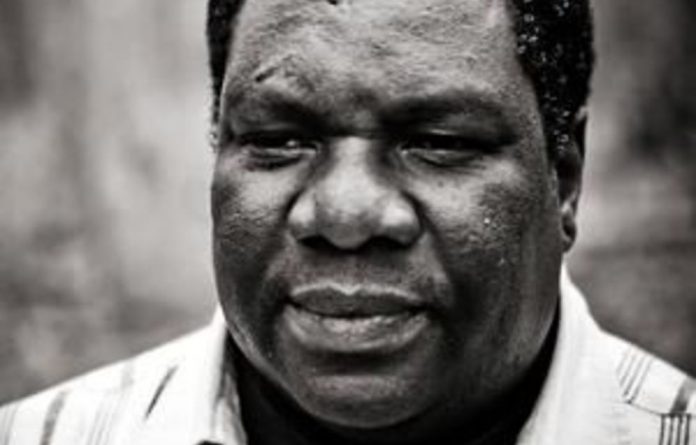 It says a lot about Vusi Mahla­sela’s love and respect for music that when he began renovating his house in Mamelodi the first room that was completed was his new studio and rehearsal space.

When the Mail & Guardian arrived there last week to interview him before his historic 20-year ­anniversary concert, which will be held on Sunday at Johannesburg’s Lyric Theatre, bricks were piled up outside and several walls were only half-complete.

Mahlasela’s lounge is small and functional, decorated with framed pictures of Zion Christian Church bishops; he is a devoted member of the church.

Gospel music was blaring from a large Samsung television and behind the front door was a picture of ­Mahlasela and his label boss in the United States, Dave Matthews, hanging skew on the wall, still wrapped in plastic.

Mahlasela strolled down the passage in a white, mustard and navy golf shirt and navy pants. He was made aware of our presence by Snowy, his fluffy white dog, who was barking intently at our invasion of his territory.

Mahlasela greeted us warmly and suggested that the studio would be the best place for our interview.

Inside, members of his band were deliberating over a new song they had laid down the previous day, now playing in the background. ­Mahlasela introduced us and then asked them to leave us, insisting that he did not want to be disturbed.

First musical memories
Where do you begin to discuss the career of a giant of South African music that has spanned 20 years and 10 albums?

Perhaps the best place is right at the beginning, so I asked Mahlasela about his first musical memory. He smiled and recounted tales of his grandmother’s shebeen.

MmamoShweshwe had the first shebeen in Mamelodi, which was named Sgodiphola — “place to chill”. This was where a young Mahlasela, aged five, first came into contact with men singing in the mbube style.

“We used to get a lot of characters there, even some of the gangsters,” Mahlasela said. “But there was lots of music. There were vinyls playing and when those men got drunk and happy, they would be out at the back singing.”

He smiled as the memories came flooding back. “I was taken with it. Wow! I just wanted to sing, too, after hearing their voices blend together.”

What music was played?

“We used to play a lot of jazz at the shebeen, a lot of American jazz. Things like Mahalia Jackson, Archie Shepp, and then also local groups like the Dark City Sisters and the Mahotella Queens.”

The young Mahlasela was so taken with the music that he and his friends began singing together, doing covers of popular songs.

They also began to make instruments to form a band. Mahlasela’s first guitar was crafted from fishing line and a big can that originally had atjar in it.

I asked him about the early musical influences in his life.

He did not hesitate: Philip Tabane, a Mamelodi resident now revered as one of South Africa’s greatest guitarists and composers, and Miriam Makeba, but her songs were banned and much harder to access.

His first band was called the Pleasure Invaders, a name coined by a neighbour who worked the night shift at a railway station and was trying to get much-needed sleep when the young musicians were playing as loudly as they could next door. But he could not have been that perturbed — he bought Mahlasela his first acoustic guitar.

But despite Mahlasela’s keen ­interest in music, he dreamed of becoming a doctor or a priest when he grew up.

Becoming political
In 1976, things began to change for the young Mahlasela. With the growing unrest in South Africa’s townships, he became aware of apartheid for the first time.

“Up until then I didn’t know that there were problems in South Africa with politics. I just went to school and church and I didn’t know anything was wrong. But at 11, I started to ask questions.”

On June 20 that year, just days after the riots in Soweto, the youth of Mamelodi clashed with the police.

“I was asking: ‘What is happening here?’ That’s when my political education began. After that I started going to political meetings to see what was going on.”

An inquisitive Mahlasela soon discovered the world of the political poets. In 1979 he joined a youth poetry group, who chose the name Ancestors of Africa.

“We were supported by the late Dr Fabian Ribeiro, who gave us his garage to rehearse [in]. He became my political mentor. When we were not rehearsing, we would sit with him and he would tell us what was happening in the country.”

Ribeiro’s role in the struggle is well documented. A constant thorn in the security police’s side, he was active politically in Mamelodi until he and his wife were assassinated in the courtyard of their home on December 1 1986.

“He was loved by the people of Mamelodi,” said Mahlasela, whose first taste of police harassment came after a planned trip to Botswana with Ancestors of Africa.

“One of the guys in the group was a police informant and he sold us out. They knew all our plans before we left. My guys were arrested on a train in Komatipoort. They had a list with our names and nicknames.”

Mahlasela, who was not with them because of a mild attack of epilepsy, was arrested at home.

“They locked us up for three weeks and they didn’t enter our names into the records, because we were minors. Our families were looking for us in hospitals; they didn’t know where we were.”

Eventually, the group was released but on strict conditions. Every day after school Mahlasela had to report to the local police station. “They even forced me to go to church every Sunday. It was too much.

“Every time my family wanted to leave Mamelodi, they had to go to ask permission for me.”

This treatment lit a fire under the young Mahlasela. “It gave me wings,” he said, poetically.

When we come back
Inspired by his experiences with the police, Mahlasela began thinking about the South Africans who had escaped the clutches of apartheid South Africa and gone into exile. He wrote a song that celebrated the day when they would return to a democratic country.

The song, When You Come Back, is one of the finest South African songs ever penned. Opening with a plaintive tribute to a fallen lost comrade, Mahlasela calls for the people to come forth in song, to ring the bells and beat the drums as the exiles return to their homeland.

It was also the first time that ­Mahlasela’s golden voice was introduced to the world of recorded music and the song has become a South African anthem.

It was a new kind of folk song — for a country imagined, a free and democratic South Africa that, although unknown at the time, was only a few years away.

After Mahlasela played the song at the Zabalaza Festival in London in 1990, it was used as the soundtrack and title of a documentary about South African exiles living in the United Kingdom.

The film crew came to South Africa and paid Shifty Records to record the song.

Warrick Sony, who recorded under the moniker Kalahari Surfers, was so impressed with the young Mahlasela that he called in Shifty partner Lloyd Ross and they offered to record an album for Mahlasela. The resulting album, When You Come Back, came out in 1992 with a limited release of 500 cassettes.

Asked about the popularity of When You Come Back, Mahlasela responded humbly: “It’s great to see your work being appreciated; I had no idea that it would be such a big song.”

A road map to discovery
But the popularity of When You Come Back is only half the story, according to Mahlasela. “Of course, there is more to that song. When I wrote it, there was something more about it. Some of the lines that I wrote — I didn’t realise that they were more about me finding my place than about anything else; those lines were like a road map for me to find myself.”

He refers to a line in the song — “I will be the one who will climb the mountain, reaching for the top of our Africa.” It would resonate differently when he delved into his past.

When he was approached to take part in the BBC documentary series Who Do You Think You Are?, which explored his family tree in depth, Mahlasela discovered that his great- great-great-great-grandfather, whose name was Mokalanyane, was an inyanga and had the gift of making rain. “Farmers used to come to him in the Free State when there was drought and he would go up the mountain, and as he descended the rain would come. The mountain is called Mpolwane. He was the only one who went up that mountain and came back.

“On my father’s side, there was also my great-great-great-grand­father who used to climb up on this big stone to address people. Then I realised that, when I wrote that line, it connected to both of these men who were my ancestors. I thought: ‘Why did I write this song?’ I thought it was about something else but now it’s talking to me about this.

“I understand now: I am coming back as well to reconnect with every­body. That song was more about finding out who we are and living with the spirit of Ubuntu.

“Every album I have released has a special message, especially my first three. I always say these are like the Father, the Son and the Holy Spirit; if you have heard one, you need to hear all three,” he said.

They are When You Come Back, Wisdom of Forgiveness and Silang Mabele (Let’s get down to work) and could be regarded as a road map for South Africa between the years 1992 and 1997. They were the state of the nation addresses from one of the ­finest poets and singers at the time.

Back to the present
But looking at South Africa in 2012, Mahlasela is downbeat: “Africa has this gift of Ubuntu, but that thing is broken now. Why is it broken?

“Greed and selfishness are coming through; even our leaders are trapped and they are not seeing it.”

Perhaps South Africa needs Vusi Mahlasela, now more than ever. While we reflect on 20 years of his wondrous music and poetry, perhaps we should reflect on the messages he has given us.

He regards himself as a guide and a servant to South Africa: ” I am not a star, I am a firefly.”