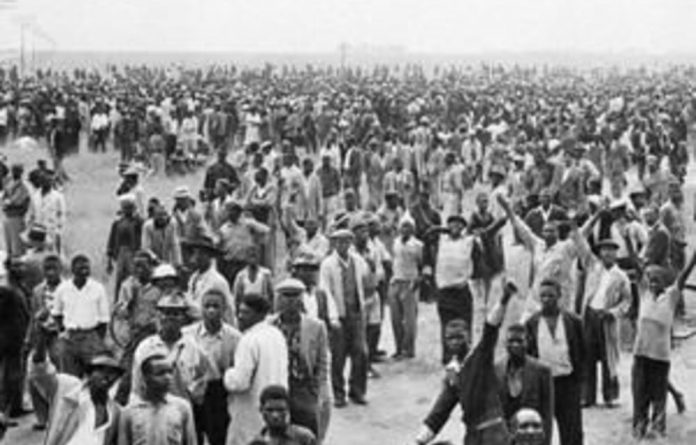 Sharpeville: An Apartheid Massacre and its Consequences by Tom Lodge (Oxford University Press)

Sharpeville has twice been the scene of epochal confrontations between popular will and state power. On March 21 1960 police fired rifles and automatic weapons into a crowd of protestors, killing 69 of them, injuring three times as many and inaugurating a new phase of resistance. In 1984, as Tom Lodge puts it in his carefully written new history, Sharpeville and the townships of the Vaal triangle “came to represent the epicentre of an insurrectionary rebellion that, through the remainder of the decade, would engulf South Africa”.

Fifty-two years after the massacre and nearly three decades after its sequel, the battle over who controls the memory and the meaning of these events is playing out in the streets as residents of Sharpeville protest against President Jacob Zuma’s decision to conduct Human Rights Day celebrations in Kliptown, Soweto, rather than at the site of the killings.

According to The Star, streets were barricaded on Tuesday, stones thrown and rubber bullets fired from a Nyala — the Saracen-style armoured car of contemporary public-order policing. Sedibeng mayor Simon Mofokeng was prevented from speaking. Mofokeng later told reporter Poloko Tau that he and other local officials would not be travelling to Kliptown. “If this day is celebrated in Gauteng, it should be celebrated in Sharpeville,” he was quoted as saying.

No doubt the protests, in an area steeped in direct confrontation with authority, were fuelled just as much by a general sense of abandonment by the government and ruling party as they were by Zuma’s decision to go to Soweto instead.

Clearly, they must be contextualised against the backdrop of a series of confrontations this week in Ratanda near Heidelberg in Gauteng and in Grabouw in the Western Cape, and service-delivery protests in general. It is precisely in this context, however, that Zuma’s decision to speak at Kliptown represents such an extraordinary failure of political and historical attention.

Fine-grained account
Lodge’s fine-grained account of the killings and their aftermath, Sharpeville: An Apartheid Massacre and its Consequences, is full of echoes that the president and his advisers would do well to hear, but they seem instead to be determined to drown them out in the bombast of ANC ­historiography.

Lodge draws on oral testimony, the documentary record and thoughtful readings of photographs and film footage, as well as the work of other historians, to build an exceptionally textured picture of the build-up to the March 21 protests and their ­aftermath.

The sense that emerges immediately from a reading of this account is that Zuma has not only ignored the people of Sharpeville, but has also sought to make the Freedom Charter and its adoption at Kliptown in 1955 the pivot around which South Africa’s liberation turns. Effectively, he has decocted the content of the Sharpeville story and filled up the vessel of Human Rights Day with the narrative of the charter and the governing party.

That strategy is all the more brazen given that it was precisely anger and frustration within the ANC over the way that the charter was drafted — not least its nonracialism — and the role of white communists in the ­process that helped cause the breakaway of the Pan Africanist Congress (PAC), which organised the March 21 ­protest.

Uncomfortable background
Lodge records the outrage of The Africanist, the mimeographed organ of the ANC’s rebels, at the assertion that “South Africa belongs to all who live in it, black and white”.

“Do stolen goods belong to a thief and not their owner?” it thundered.

This background is uncomfortable for Zuma on numerous levels. As Lodge reminds us, among the most important of the Africanists who led the PAC’s split from the ANC were people who had been closely associated with the party’s youth league.

Potlako Leballo, who had been chairperson of the Orlando East branch of the league, emerges from Lodge’s account as a kind of 1950s Julius Malema: charismatic, radical and insistent that whites had stolen the land, which must be returned. He lived, wrote a biographer, “to dramatise, to command the centre of attention, to captivate listeners with impassioned stories”.

Lodge adds: “Even allowing for his tendency to self-aggrandisement, his life history suggests a strikingly unruly and assertive personality.”

Leballo was expelled from the ANC in 1958 following a battle for control of the Transvaal ANC, the removal of the entire provincial executive by the national leadership and a credentials battle that would sound familiar to anyone involved in an ANC provincial conference in 2012.

The analogy to Malema is not perfect — Leballo struggled financially and got around in the early 1960s on a borrowed scooter — but it is striking nonetheless. If Robert Sobukwe has had to be edited out of the ANC’s story because of his role in splitting the party, how much more embarrassing is the story of a proto-Malema who was expelled for dissenting from the national ­leadership?

A more important failure, however, is discernible in the subtler ­echoes of history.

Official agitation
Lodge sets out the economic and social conditions under which the PAC’s message began to resonate. An “exceptionally restrictive” labour market for young, relatively educated men forced them into factory work and other menial jobs — if they could get work at all.

“Youth unemployment had been a focus of official agitation since 1950,” Lodge writes. The pass laws and influx control prevented work seekers from moving to the Witwatersrand to seek jobs.

“Nearly 21 000 of an official [­Sharpeville] population of 37 000 were aged below 18.” Meanwhile, in Cape Town, where the pass law protests were the largest, migrant workers who had previously not been the focus of ANC-aligned organisers responded enthusiastically to the PAC message.

The labour ­market in the townships around ­Vereeniging right now is worse than restrictive and the availability of young people who could be mobilised in angry protest considerably greater.

Of course, there is much more to Lodge’s work than these resonances on which he makes no overt comment. He carefully unpicks the threads of the PAC’s complex relationships with liberal whites in Cape Town, traces the vagaries of memory and its intersection with the documentary record and examines the international impact of the massacre. What gives his work its urgency, however, is its live relevance to an increasingly angry South Africa.

To point this out is not to compare the misery of apartheid repression with the grievances of poor South Africans in 2012, but to draw attention to the life circumstances of people who feel angry and disenfranchised and the reasons why they take to the streets.

A president who was attentive to the echoes coming down the years from 1960 would address the real crisis that is building within his own party and, more importantly, in the Evatons and Sharpevilles and ­Ratandas of 2012.