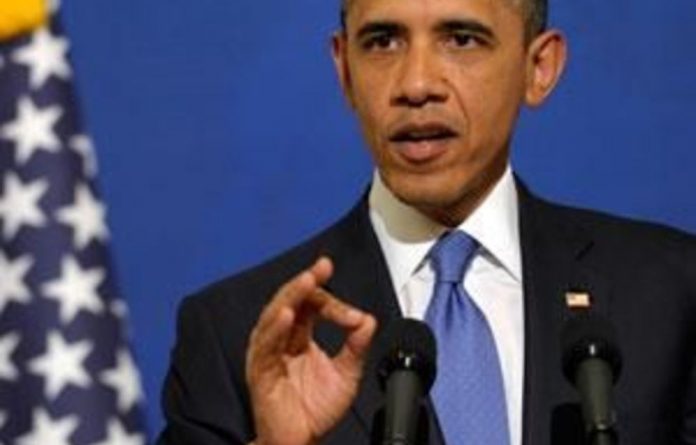 US President Barack Obama on Sunday urged China to use its influence to stop North Korea’s “bad behaviour” in a nuclear standoff with the West and hinted at tougher sanctions if the reclusive state goes ahead with a rocket launch next month.

Such a launch would only further isolate the impoverished North, which must show its sincerity if on-again-off-again six-party aid-for-disarmament talks are to restart, Obama said.

Seoul and Washington say the launch is a disguised test of a ballistic missile. North Korea says it merely wants to put a satellite into orbit.

Obama said that Beijing’s actions of “rewarding bad behaviour (and) turning a blind eye to deliberate provocations” were obviously not working, adding he would raise the matter at a meeting with Chinese President Hu Jintao on Monday.

“I believe that China is very sincere that it does not want to see North Korea with a nuclear weapon,” he told a news conference in Seoul before a global summit on nuclear security. “But it is going to have to act on that interest in a sustained way.”

Obama’s comments were his strongest push yet to get China to use its influence to rein in its ally North Korea and dovetails with recent calls for Beijing to meet its responsibilities as a rising world power.

In an election year when Republicans have accused Obama of not being strong enough with Beijing, talking tough on China is seen as a vote-winner after three years of troubled diplomacy in dealing with Afghanistan, Iraq and Iran.

China is host to the six-party talks which also involve the two Koreas, the United States, Japan and Russia.

Obama earlier visited a US base on the edge of the Demilitarised Zone (DMZ) as a solemn North Korea came to a halt to mark the 100th day after “dear leader” Kim Jong-il’s death.

“You guys are at freedom’s frontier,” Obama, wearing an Air Force One bomber jacket, told about 50 troops crammed into the Camp Bonifas mess at one of the world’s most heavily fortified frontiers.

He spent about 10 minutes on a camouflaged viewing platform at the DMZ, talking with some of the soldiers on guard as the flags of the United States, South Korea and the United Nations flapped loudly in the brisk, cold wind.

The White House cast Obama’s first visit to the DMZ, which has bisected the peninsula since the end of the Korean War in 1953, as a way to showcase the strength of the US-South Korean alliance and thank some of the nearly 30 000 American troops still deployed in South Korea.

The 4km DMZ was drawn up at the end of the 1950-53 civil conflict, which ended in a truce that has yet to be finalised with a permanent peace treaty, leaving the two Koreas in effect still at war.

Rocket launch condemned
Washington has condemned next month’s planned rocket launch as a violation of North Korea’s promise to halt long-range missile launches, nuclear tests and uranium enrichment in return for food aid. Obama said that if the North goes ahead with the rocket launch, a February food aid deal could fall apart.

South Korea’s Yonhap news agency quoted a military official on Sunday as saying the main body of the rocket had been moved to the launch site on North Korea’s west coast. The launch will coincide with big celebrations marking the 100th anniversary of the birth of the state’s founder, Kim Il-sung.

North Korea’s defiance is clouding Obama’s much-touted nuclear disarmament agenda, which is also being challenged by Iran’s continued nuclear developments in the face of sanctions and international criticism.

Obama said the window of opportunity for diplomacy with Iran was still open, and he also discussed the Syrian crisis with Turkish Prime Minister Tayyip Erdogan.

Obama will join more than 50 other world leaders on Monday for a follow-up to the inaugural nuclear security summit he organised in Washington in 2010 to help combat the threat of nuclear terrorism.

While North Korea and Iran are not on the guest list or the official agenda, they are expected to be the main focus of Obama’s array of bilateral meetings on the sidelines of the two-day summit.

North Korea mourns
Obama’s visit coincided with the end of the 100-day mourning period for the North’s long-time leader, Kim Jong-il, who died in December. Tens of thousands of people crammed into Kim Il-sung Square in central Pyongyang to mark the occasion.

The state’s new young leader, Kim Jong-un, the third member of the Kim family to rule the state, bowed before a portrait of his father at the palace where he lies in state. He was joined by his uncle, Jang Song-thaek, and military chief Ri Yong-ho.

Standing alongside South Korean President Lee Myung-bak at media conference, Obama told reporters it was difficult to get a clear impression of how the succession process was going because it was not clear who was “calling the shots” in the North.

The young Kim himself made a surprise trip to the DMZ at the start of the month. He looked across the border through binoculars and told troops to “maintain the maximum alertness since (they) stand in confrontation with the enemy at all times”. — Reuters