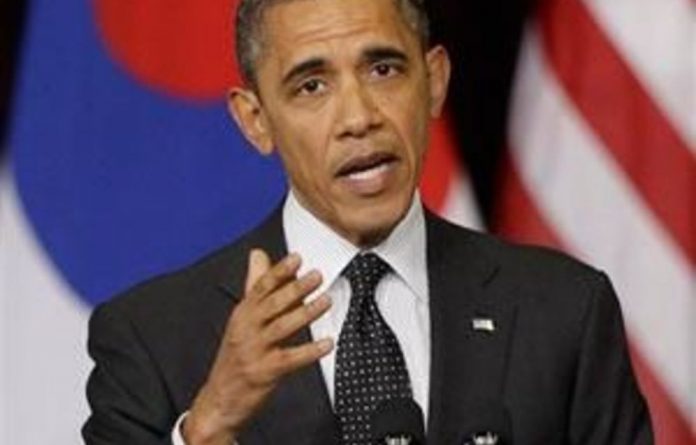 US President Barack Obama has urged North Korea to cancel a rocket launch planned for next month, warning the regime that it had nothing to gain from “threats or provocations”.

Speaking on the eve of an international summit on nuclear security in Seoul, the South Korean capital, Obama said the expected launch of a long-range rocket to coincide with the centenary of the birth of North Korea’s founder, Kim Il-sung, in mid-April, would deepen the country’s international isolation.

“Bad behaviour will not be rewarded,” Obama said after meeting the South Korean president, Lee Myung-bak. “There had been a pattern, I think, for decades, in which North Korea thought if they had acted provocatively, then somehow they would be bribed into ceasing and desisting acting provocatively.”

The US and its allies say the missile launch would be a violation of a UN ban on nuclear and missile activity; it could also derail a deal, reached last month, in which the North would halt missile tests and its uranium enrichment programme in return for US food aid.

Obama called on China to use its influence as North Korea’s only ally and biggest aid donor to persuade the regime to return to six-party nuclear talks, stalled since the North walked out in 2009 and conducted its second nuclear weapons test.

“What I’ve said to [China] consistently is rewarding bad behaviour, turning a blind eye to deliberate provocations, trying to paper over these not just provocative words but extraordinarily provocative acts that violate international norms, that that’s not obviously working,” he said.

‘Freedom’s frontier’
During a visit on Sunday morning to the demilitarised zone (DMZ) separating the two Koreas, Obama told US troops they stood between a free and prosperous South Korea and repression in the North. “I could not be prouder of what you do,” he said. The same was true of US military bases worldwide, he added, “but there’s something about this spot in particular.

Obama’s visit to the 2.5-mile-wide stretch of land that has separated the two countries since the end of the Korean War in 1953 came as North Koreans ended their 100-day official mourning period for Kim Jong-Il, who died of a heart attack in December.

Over the past three months the regime has sought to strengthen the position of Kim’s youngest son and successor, Kim Jong-un, culminating in a rocket launch next month as part of events to mark Kim Il-Sung’s centenary on 15 April.

Jong-un visited Panmunjom, the so-called peace village that lies inside the DMZ, last month and has made several high-profile inspections of military units around North Korea.

Consolidating power
Next month the country’s supreme people’s assembly and ruling Workers’ party are expected to give Kim Jong-un the titles of chairperson of the defence commission and secretary general of the party in an attempt to consolidate his grip on power.

Obama, China’s Hu Jintao and dozens of other world leaders will meet in Seoul on Monday to discuss ways to prevent nuclear terrorism. Iran and North Korea are not on the official agenda but are expected to dominate bilateral discussions on the side-line of the two-day summit.

North Korea says it has the right to launch what it describes as an observation satellite, and accused the international community of hypocrisy. “If there are any sinister attempts to deprive the [North] of its independent and legitimate right and impose unreasonable double standards, this will inevitably compel us to take countermeasures,” the foreign ministry said in a statement.

Media reports quoted unnamed US and South Korean military sources as saying the rocket had been taken to a site in North Korea’s north-west region in preparation for the launch. The foreign ministry in Pyongyang said preparations to put an observation satellite into orbit had entered a “fully fledged stage of action”.

The US, Japan and other countries say the launch would violate a UN ban on nuclear and missile activity because the same technology could be developed to deliver a nuclear warhead on a long-range missile.

Australia and the Philippines have voiced concern about the three-stage rocket’s trajectory, while Japan has threatened to shoot it down if it threatens its territory. Even China, the North’s main benefactor, has urged its ally to “stay calm, exercise restraint and avoid escalation”. —