US halts military aid to Mali 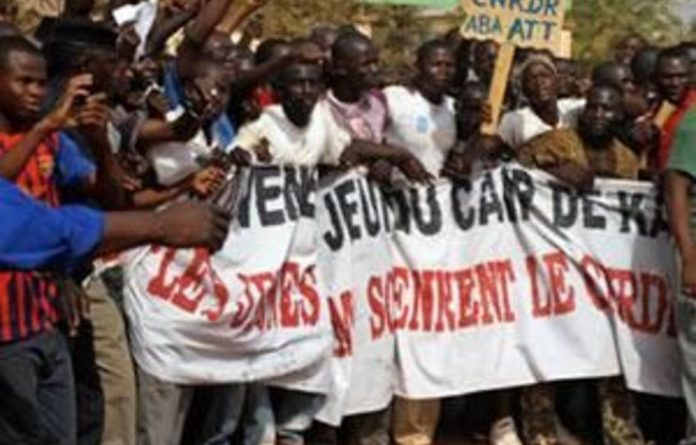 The US has “paused” military aid to Mali, a key ally against Islamist militants in the Sahel, a US diplomat said on Monday, in a move that could hamper efforts to curb al-Qaeda’s North African wing.

The Malian president, Amadou Touré, who was forced out of power in a coup last week, was seen as a linchpin in the fight against Islamist groups including al-Qaeda in the Islamic Maghreb (AQIM), which has expanded southwards into Mali after a successful clampdown by the government in its native Algeria.

Western governments are wary of dealing with mutinous middle-ranking army officials led by Amadou Sanogo, who maintains a tenuous grip on power and faces a resurgent, decades-old independence movement with links to AQIM.

“At the moment, any military aid has been paused,” said a spokesperson for the US embassy in Bamako, adding that the move was temporary.

Military assistance is part of a development package that last year poured $138-million into the impoverished cotton and gold-producing country. It included $600 000 in logistical assistance as well as counter-terrorism training aimed at keeping a check on AQIM. Other European and African nations have suspended humanitarian assistance to the tune of millions of dollars annually.

The US has also been quick to distance itself from the English-speaking coup leader, Sanogo, who has taken to wearing a US marines badge in televised appearances. Sanogo attended at least three separate US training courses between 2004 and 2010, including a prestigious basic infantry course in Georgia.

Fervent hope
A US official who confirmed Sanogo’s attendance said: “Everything he’s doing is contrary to everything we teach at US military schools. The whole principle we teach is that the army is under a civilian government.”

US officials were reviewing the situation with the intention of resuming aid to Mali, the embassy spokesperson added. “The de facto situation on the ground means delivering any kind of aid is very difficult. Anything in the pipeline has been suspended. Our fervent hope is that there is a return to a democratic government, [and] that allows us to resume aid.”

In the weeks before he was deposed, Touré sidestepped increasingly vocal complaints from Mali’s army of 70 000 men, struggling against battle-hardened Tuareg militias returning from Libya equipped with state-of-the-art weaponry.

Underscoring the growing threat in the lawless Sahel, AQIM on Saturday claimed to be holding a German citizen abducted in the northern Nigerian city of Kano earlier this year. Nigerian and German officials have not publicly commented on the case, but a Nigerian intelligence source confirmed the man was Edgar Fritz Raupach, an engineer.

Diplomats have watched nervously as the fallout from the death of the Libyan dictator Muammar Gaddafi, who routinely recruited Tuareg mercenaries, has left the volatile region awash with arms.

In Mali, that has meant a boost to the uprising for independence by nomadic Tuareg rebels, who, officials say, have forged links with Islamists roaming the vast, lawless Sahara.

Power vacuum
The junta now ruling the country is at the helm of an army in disarray, and which faces Tuareg fighters who have taken advantage of a power vacuum to send a column of rebels southwards.

A spokesperson for the main Tuareg independence movement said the group would consider a ceasefire with the new regime only once it controlled the prize garrison towns of Timbuktu, a regional capital and Kidal, which is currently held by a separate Tuareg militia faction, apparently backed by the junta.

Moussa Ag Acharatoumane, a spokesperson for the National Movement for the Independence of Azawad [a desert region in northern Mali] said: “Unfortunately, it’s the army, which has forced us to pick up arms, who are in power today. We’ve always been open to dialogue, but if we have to use force to dislodge the army today, we will.”

A western diplomat said: “It’s not clear if there is much appetite for a bloodbath. But in the worst case, we’re looking at something similar to Libya, where disparate Tuareg groups form a spontaneous uprising rather than a unified movement.

“Our reading of the situation, militarily, is that it’s likely to get worse before it gets better.”

In the neighbouring, coup-prone nations of Niger and Chad, vast administrative areas have also strained weak central governments. Dan Ballan Mahaman Sani, a Tuareg activist in the northern Niger town of Azawad, said: “Banditry, pillage, rape — all those things are worse post-Gadaffi. Whatever the rebel fighters did in Libya, they have come back and can do it here, in Niger, too.” —