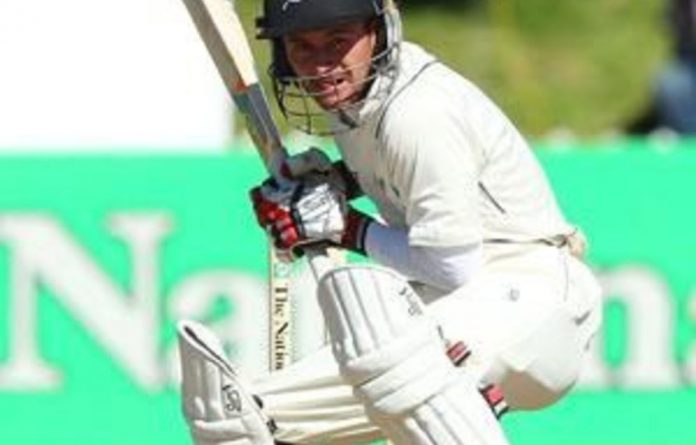 A heroic century by 21-year-old Kane Williamson trumped a hostile South African bowling attack and allowed New Zealand to hang on for a tenacious draw in the third Test on Tuesday.

South Africa secured the series 1-0 but were on the verge a second victory before tea after a sensational bowling performance by Morne Morkel reduced New Zealand to 83-5.

In a dramatic final session, New Zealand lost only one further wicket as Williamson held firm in a defiant 80-run stand for the sixth wicket with Kruger van Wyk, following that with an unbeaten 37-run partnership with Doug Bracewell.

Morkel ripped out the New Zealand top order to finish with career best figures of six for 23 which won him the man-of-the-match award over Williamson.

But Morkel and fellow quicks Morne Steyn, Vernon Philander and Marchant de Lange had reason to believe they could have cleaned out New Zealand had the fielding been sharper.

Williamson, batting at number four in place of the injured skipper Ross Taylor, survived a painful strike in the groin and at least four edges behind the stumps including a low catch claimed by Alviro Petersen at point.

Television replays showed the ball may have hit the ground first and the decision went in favour of the batsman who at that stage was on seven but went on to post his second century from 228 balls, spending 327 minutes at the crease.

Morkel is relentless
When Morkel cleaned out Dean Brownlie (15) and Daniel Vettori with successive yorkers, van Wyk entered the fray and took several balls to the body as he made 39 in 100 minutes.

With his dismissal and 19 overs remaining, the writing looked on the wall for New Zealand with only tailenders Doug Bracewell, Mark Gillespie and Chris Martin to bat.

Bracewell had scored a duck in his previous three innings in the series but played confidently as he supported Williamson to be 20 not out after he was dropped by De Villiers on eight.

South Africa had resumed the day at 75 without loss and raced to 189-3 before declaring with De Villiers belting 68 and JP Duminy unbeaten on 33.

Morkel started his destructive campaign in New Zealand’s second over when Daniel Flynn gloved a rising delivery through to wicketkeeper Mark Boucher to be gone without scoring.

Brendon McCullum also failed to get off the mark before Morkel trapped him lbw and Martin Guptill edged the strike bowler to Jacques Rudolph at gully and was gone for 18.

Brownlie faced 18 balls without scoring before launching into De Lange and taking 14 off one over, including three boundaries, but he was to add only one more run before Morkel struck again.

Meanwhile, Taylor, who suffered a broken forearm when hit by Morkel on the fourth day, underwent surgery on Tuesday and the New Zealand management said he would be sidelined for at least four weeks. — Sapa-AFP