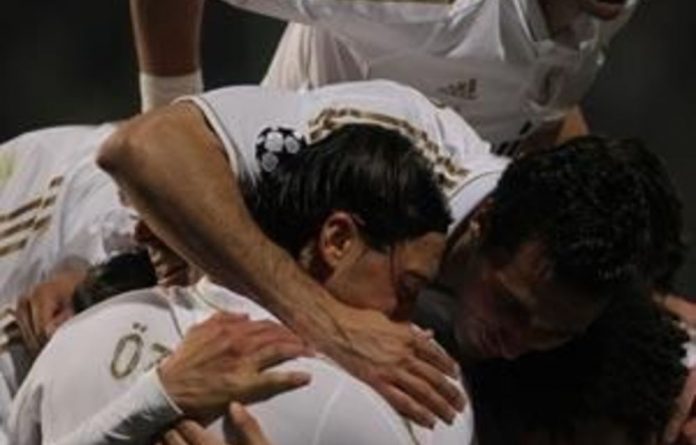 Real Madrid gave APOEL Nicosia a reality check in the biggest match of the unheralded Cypriot club’s history when they met on Tuesday in the Champions League.

Looking to cause one of the greatest shocks in the history of the competition, APOEL came up short against Los Blancos, losing 3-0 at home to the nine-time European champions in the first leg of the quarterfinals.

All of Madrid’s goals came in the final 16 minutes at a rocking GSP Stadium in Nicosia with France striker Karim Benzema scoring twice to take his Champions League tally to 25 goals in 41 matches and Brazilian playmaker Kaka scoring the other after coming off the bench.

“Real has advanced to the next phase of the Champions League, that’s for sure,” APOEL coach Ivan Jovanovic conceded.

Chelsea also took a giant step toward the semifinals, beating Portuguese side Benfica 1-0 away courtesy of Salomon Kalou’s 75th-minute goal.

“It’s terrific, you couldn’t have hoped for a better result … Nothing is over — there is still another 90 minutes to play. But we will have home advantage,” said interim Chelsea manager Roberto Di Matteo.

After producing one of the most diverse quarterfinal line-ups in recent memory, the Champions League could easily end up having four of its usual contenders in the semifinals.

The two other last-eight first legs are played on Wednesday, with reigning champions Barcelona visiting AC Milan and Marseille at home to Bayern Munich, which hosts the final at the Allianz Arena on May 19.

Either Marseille or Bayern will surely be facing Madrid, which gave a confident, assured display on the tiny Mediterranean island.

Cypriots made history
After beating Lyon in the last 16, the first Cypriot team to reach the Champions League knockout stages was looking to add an even more famous scalp on its historic run. But in the end the margin of victory could easily have been wider.

“The dream of the Champions League looks like it’s over. It looks very, very, very difficult for APOEL to beat us 4-0 or 4-1 in the Bernabeu,” said Madrid coach Jose Mourinho.

“But I think the next dream is to be in the Champions League again,” he added.

Benzema somehow contrived to miss an open goal from five yards out before finally opening the scoring in the 74th minute, diving to meet Kaka’s cross from the left with a glancing header.

Kaka gave Madrid more of a cutting edge after coming on as a second-half substitute and he neatly finished off good work on the left wing by fellow substitute and compatriot Marcelo to end APOEL’s hopes of a comeback in the 82nd minute.

Mourinho, bidding to become the first coach to win the competition with three clubs, was able to celebrate a third goal approaching injury time when Benzema connected with a perfect pass from Mesut Özil.

“This draw with Real was perhaps the last gift we’ve received from football this year because for us, it was a real honour to play this team,” Jovanovic said.

Di Matteo’s good run continues
Di Matteo has made an impressive start to his temporary spell in charge following the firing of Andre Villas-Boas but would have faced heavy criticism had a much-changed lineup, missing stalwarts Didier Drogba, Frank Lampard and Michael Essien, lost against Benfica.

As it was, his selection gamble paid off, with Fernando Torres — starting in place of Drogba up front — crossing for Kalou to guide home a side-footed finish to mark a rare start for the Ivory Coast forward.

“He’s come into the team after a long spell out, he got the goal and had a great game,” Di Matteo said about Kalou. “I didn’t think it was a gamble but sometimes in life you have to take a little risk.”

Benfica created double the amount of chances as Chelsea, England’s sole remaining representative in the competition, but lacked composure in front of goal, with Oscar Cardozo, Bruno Cesar and Jardel all wasting good opportunities. — Sapa-AP