A test of testosterone levels 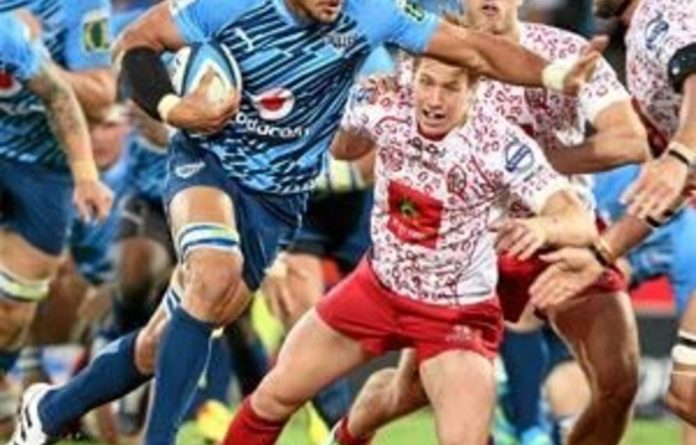 Although the Stormers and the Bulls meet far more often than is good for the game these days, there is no mistaking the frisson that comes with a fixture between the two teams.

This week the “house full” signs will go up at Newlands in Cape Town and the audience is likely to be served something very close to a Test match.

That means physicality, conservative tactics and a win-at-all-costs mentality. Morne Steyn has, no doubt about it, spent extra time on his drop-goal techniques during training this week, for it is on these occasions that the most maligned method of scoring in rugby union comes into its own.

The form lines suggest that the Bulls will take to the field as the narrow favourites, principally because the Stormers, despite being the only unbeaten side left in the competition, have spent the season flattering to deceive. Last week’s 24-19 win against the Lions in Johannesburg was a case in point: the Stormers were 18-0 up in the first quarter but finished the game desperately defending a slender lead.

Bulls run riot over Reds
The Bulls, on the other hand, chose last week to make a defiant statement, defeating the defending champions, the Reds, in an eight-tries-to-one demolition job. The Bulls’ one defeat this season came against the Blues at Loftus but, as time goes on, the relative form of the two sides makes that result seem an aberration.

Somehow the blue machine has been reinvented and we have all stopped talking about the departed luminaries. This is the lifeblood of the game, of course — new stars emerge to fill the gaps. For example, five years ago Juandre Kruger was released by Western Province. He played a season of low-level rugby for the Blue Bulls and then went overseas to ply his trade.

Since returning in 2010 he has risen in the ranks and now returns to Newlands as the heir to Victor Matfield’s number five jersey.

Matfield remains a brooding presence behind the scenes and his tactical input may well have a significant impact on Saturday’s game.

If the Stormers retain their unbeaten status, they will have sent a clear message to the other 14 sides in the tournament, but there is a feeling that the Bulls’ tight forwards have the edge on their opponents and that is where the game will be won and lost.

It is the beginning of the real season for the Stormers as they head overseas on Sunday for a month-long sojourn in the antipodes. So far, they have done everything asked of them, with the possible exception of earning bonus points for tries, but now they must find a way to take their game to another level.

Sharks and Cheetah out of the country
Already on tour are the Sharks and the Cheetahs. Both lost narrowly last week, despite playing some sublime rugby against the Waratahs and Crusaders respectively. This week the Cheetahs are in Wellington and the Sharks travel to Canberra to play the Brumbies.

Few Sharks teams have triumphed in Australia’s capital and there is no reason to believe that this year’s model will buck the trend. A new edge to the attacking game by John Plumtree’s men has not been matched in defence and they conspired to lose a game they should have won comfortably against the Waratahs.

Their opponents this week have former Sharks technical analyst Jake White at the helm now and, as a result, the Brumbies have lost just once this season, narrowly. Their wins have been narrow, too, reflecting the trend in all games this year, but they were impressive in downing the log-leading Highlanders last week.

White has now confirmed that he intends to see out his four-year contract, having finally scotched rumours that he was going to take over the England coaching job. He has a squad of no-name players in the main, but that is how the franchise began back in 1996 and there is reason to believe that it may be on the launch pad for another period of sustained success.

One link to the great Brumbies sides of the past is backline coach Stephen Larkham. The Wallaby flyhalf who broke South African hearts with his extra-time drop goal in the semifinal of the 1999 World Cup was a Brumbies foundation player. He played at fullback under Rod Macqueen for the first two years and then moved to flyhalf under Eddie Jones.

The other no-names in those mid-1990s backlines were George Gregan, Stirling Mortlock and Joe Roff, and the forwards boasted such luminaries as Owen Finegan, Jeremy Paul and the great Argentinean prop, Patricio Noriega. Listing such players is a potent reminder that the subsequent new Australian franchises, the Force and the Rebels, have fallen woefully short of the standards set by the Brumbies in the early days of professionalism.

It should also be a grim reminder to the South African Rugby Union that the Southern Kings need to be a great deal more than a clearing house for players who cannot get contracts elsewhere. The Brumbies tasted success because there was enough talent outside Sydney and Brisbane to make a third franchise succeed. History proves that there was not enough for a fourth and fifth and, although South Africa’s player base is immeasurably deeper, there is not enough out there to make a sixth team viable.