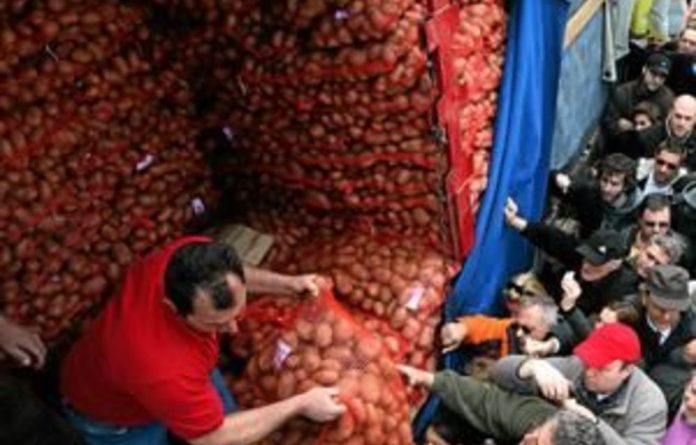 Spyros Gkelis, a smart and hard-working biology lecturer from Thessaloniki, sees it like this. “If someone shoves you,” he said, “you know, like really pushes you hard in the street so it hurts, your first reaction is to lash out, strike back. But if that does not achieve anything, if they keep pushing and it keeps hurting, you think again, try something else, work out some way of dealing with it.”

In their fifth year of recession and with 21% of the workforce jobless, salaries slashed, one in 11 people in greater Athens using soup kitchens and half the country’s most prescribed medicines now in short supply, that is what more and more Greeks are doing. Faced with a half-broken state and systems and structures only making things worse, ­people are doing things differently.

In a clearing on a hillside above the city, Elisabet Tsitsopoulou found herself buying five 25kg sacks of potatoes, for herself and her neighbours, from the back of a lorry. She paid €0.25 a kilo, instead of the 60c to 70c she would pay in the shops. The farmer she bought from, Apostolos Kasapis, was equally happy: he got his money straight away, rather than having to wait up to a year — or forever — for a middleman’s cheque.

“It benefits everyone,” said Christos Kamenides, professor of agricultural marketing at Thessaloniki University, of the producer-to-consumer system he has helped to perfect. The potato movement was launched in February and has spread across Greece, incorporating other staples such as onions, rice, flour, olives and — at the last count — more than 4 000 Easter lambs. Town halls announce a sale, locals say how much they will buy and farmers show up with it in 25-tonne trucks. Everyone is happy.

With many Greeks now taking home 30% less than before the crisis but prices of many products still impossibly high, the movement is a clever and, for many, vital way to cut costs that is of practical help to both parties to the transaction. There is anecdotal evidence, too, that supermarket prices are starting to fall in response to it.

Cheap produce
In several parts of the country, small volunteer shops are setting up, often on the initiative of local councils, selling produce at barely more than cost price — the margin is marked on the pack — in member-only schemes to avoid tax and legal problems. Kamenides is developing a broader scheme along these lines. His “unified co-operative” will unite producers and consumers and may eventually serve as an economic model for buying and selling essential foodstuffs.

A few hours south, in the port of Volos, an alternative economic model is already in operation. More than 800 townsfolk have signed up for a local currency scheme called TEMs.

Teachers, doctors, babysitters, a bookkeeper, farmers and smallholders, a decorator, a hairdresser, a seamstress and a lawyer are among the members. In the past few weeks Theodoros Mavridis, a local electrician, has not had to pay a euro for his eggs, tsipourou (the local brandy), fruit, olives, olive oil, jam, soap or help in filling out his tax return.

Maria Choupis, a founder member, said as many as 15 such networks were active. Members transfer units in and out of each other’s accounts online. To ensure the currency works hard, they can hold a limit of 1 200 TEMs and cannot be overdrawn by more than a certain amount. For Bernhardt Koppold, an alternative therapist, the scheme is more direct, but also “a way of showing practical solidarity”. Choupis agrees that it is “as much social as economic”.

It is a point that recurs frequently. There is, among many Greeks, still intense anger about what they are living through, as well as almost complete disillusionment with politicians, not to mention politics. But in Choupis’s words, many are “moving beyond anger”.

In Volos, a waiter in the taverna by the ferry terminal told me that “in the years of cheap money and easy credit we just lost sight of what matters, you know? It is sad that it has taken a crisis to do it, but we’re rediscovering our values.”

Ubuntu in Greece
People are helping each other in small, informal ways. Teachers and parents’ associations “come together, gather food and discreetly arrange to allocate it to families in the school who are suffering”, said Victoria Pakrete, an Athens teacher who volunteers in a soup kitchen.

Marie le Du said that in the northern Athens suburb where her mother lives, women from the local Orthodox church worked in pairs. “They visit two or three families that are ‘their’ families, drop in for coffee and a chat to catch up and discreetly hand over a parcel of donated food as part of the visit to preserve the family’s dignity.”

Others are more organised. Reveka Papadopoulos, head of Médecins sans Frontières Greece, said that in the past year she had seen “some really encouraging, exciting things. People are seeing the power of organising themselves, of helping themselves and each other.”

In Thessaloniki, the National Theatre of Northern Greece is about to launch a season of plays by Genet, Pinter, Albee and Greek authors under the banner Social Theatreshop.

Theatre-goers will pay for their tickets with food, which the theatre’s 300 staff — actors, technicians, administrators, all working on the project for free — distribute among charities and welfare groups in the city. “We are, everyone knows it, in a very bad situation,” said deputy artistic director Giannis Rigas. “We thought we have to do something for people who now have so little money that they are going hungry. But this isn’t charity; it’s a fair exchange: food for theatre. And it’s also a way to put the theatre back where it belongs, in the community.”

It does not, in some instances, take much to change things. In Athens, Xenia Papastavrou, fed up with the quantities of perfectly good bread going to waste in restaurants and bakeries when welfare groups were spending money elsewhere to buy it, has founded a network called Boroume that, through its website, now puts 70 commercial food donors — including Greece’s largest bakery chain and 25 Athens hotels — in contact with 400 welfare groups, from elderly people’s homes and orphanages to drop-in centres for the homeless and municipal soup kitchens.

Similarly, Silia Vitoratou, a statistician, joined with friends in December to set up Tutorpool, whose site now puts 500 volunteer tutors in contact with pupils who need their help. It is a fact of Greek life that most school-children, especially those hoping to go to university, will at some stage need after-school tutoring. Many parents can no longer afford the private-tuition centres that for decades have met this demand.

Tutorpool is helping Vassilis Xanthopoulos (11), who is dyslexic and has had extra private tuition since he was very young.

“Last year we had to stop,” said Harris, his father. “My business has practically collapsed and my wife is earning half what she used to earn. It was €450 a month we no longer had. Vassilis started falling behind almost instantly. Tutorpool really saved us.”

Warming as they are, though, such initiatives cannot save everyone. Korina Hatzinikolaou is a developmental psychologist at the Athens Institute of Children’s Health, which co-ordinates Greece’s child healthcare provision. Her salary has been cut by a third and has not been paid since December so she and her two small sons have had to move in with her mother.

More alarmingly, the institute itself can no longer make ends meet and is threatened with closure. Greece’s national neonatal screening programme, among others, is now at risk.

“There are limits to what ordinary people can do,” Hatzinakolaou said. “We cannot run a health system. At some point a state has to say: ‘You know what? This really matters.

Let’s make it a priority.’ But here in Greece the social state is collapsing. I am really not sure how it will end.” —

In his book 65 Years of Friendship: A memoir of my friendship with Nelson Mandela, George Bizos tells of their only holiday together
Read more
World

The couple, from the town of Hucknall near Nottingham in central England, said they had spent almost £10 000 on a wedding package with Thomas Cook
Read more
Business

East Asia 1998, Greece 2008, Argentina 2018. The fund knows the suffering its loans cause, yet it has gone ahead in Ecuador
Read more
Opinion

When someone with such a magnificent name, and holding such an impressive position, tells you something, you have to believe her
Read more
Business

The bulk of the Reserve Bank’s shareholders are individuals,but include trusts, pension funds, unions, a library, and an archbishop
Read more
Advertising