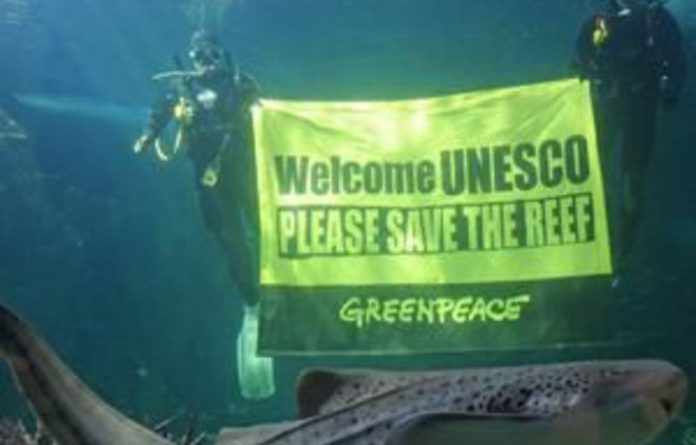 Australia’s Great Barrier Reef will suffer damage as a result of a decision to allow farmers in far north Queensland to resume using a pesticide, according to environmental groups.

The World Wide Fund for Nature (WWF) said a decision by the Australian government to lift a three-month moratorium on the use of the pesticide diuron on tropical crops such as bananas, pawpaw, pineapples and sugar cane was a “disaster” for the reef.

“We are very disappointed at this institutional failure,” said Nick Heath, the WWF’s spokesperson on pesticides.

The WWF said diuron had been detected in the reef hundreds of kilometres from its point of application. Nearly a third of the reef had been exposed to pesticides.

“Diuron accounts for 80% of the pesticide load in the reef and is persistent and toxic,” said Heath, adding that it damaged sea grasses, on which dugongs and sea turtles feed.

In December, a three-month ban on diuron came into force. It covered the wet season when soil run-off is at its greatest. From this weekend farmers can resume spraying, with some restrictions still in place. For example, spraying is not allowed if 50mm of rain is expected within three days of application, or if the land has a slope greater than 3%.

The Australian Pesticides and Veterinary Medicines Authority, which regulates the use of pesticides, said more analysis was needed before any long-term decision on diuron’s future use was made. “Yes, diuron is toxic on the grasses and yes, it will kill the aquatic organisms, but we need to ask whether there is a risk of it getting from the [farming] properties to those areas [on the reef],” said the authority’s public affairs manager, Susan Whitbread.

She said her department was analysing further data and stringent controls were still in place. “Yes, there is an environmental concern, but what we have to do is quantify it and look at whether those risks are capable of being managed before we come to a final decision,” she said.

The sugar cane industry, which is worth about A$2-billion annually in Queensland alone and is the state’s second-biggest agricultural commodity after beef, has welcomed the authority’s decision to allow spraying to resume.

“Diuron is a critical and cost-effective tool for the sugar cane-growing industry,” said Steve Greenwood, the chief executive of Canegrowers, the sugar cane farmers’ group.

“If diuron was banned, it’s very likely a lot of the cane farmers would have to revert to old practices like burning to control weeds, which would have a significant environmental impact,” he said.

The row over pesticide use comes just weeks after a United Nations environmental team visited the reef amid fears its world heritage listing could be placed in jeopardy after a rapid rise in coal exports from the area. Queensland’s resources boom has led to an expanding number of developments along the state’s coast off which the 2 500km reef lies.

Heath said that a combination of this development, climate change and pesticide pollution would cause the reef to die a death of a thousand cuts. “Most people dream about going to see the Great Barrier Reef. If we don’t start turning this around, there won’t be a reef in the future.” —