Punching above our weight 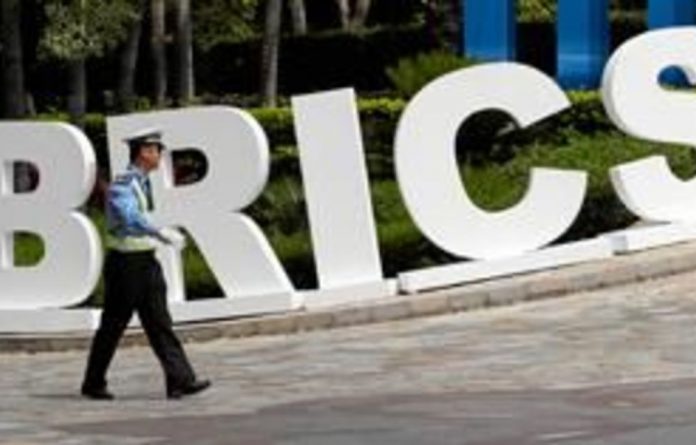 Last year, South Africa became a member of the new emerging economic power grouping known as the Brics — Brazil, Russia, India, China and now South Africa. We are the default choice representing the African continent. After much lobbying by Pretoria to the Chinese government, South Africa was extended an invitation from Beijing to join the Bric grouping.

What began as a loose grouping of emerging and populous economies is rapidly morphing into a more coherent power grouping that reflects the shifting balance of power in the global economy from the traditional world to the new. It is the post-financial crisis new economic world order.

It is one year since South Africa joined the grouping. We must now figure out how to leverage our relations with our Bric compatriots to align South Africa Inc to the respective commercial interests of the other countries in the grouping.

But does South Africa “deserve” inclusion in Brics? Goldman Sachs’s Jim O’Neil — the creator of the Bric acronym — thinks not. He said South Africa’s economy was limited in size, lacked long-term economic potential and the country’s population was too small to qualify it as a Bric. Other countries are perhaps more deserving based on their size as well as economic merit. Indonesia, Turkey, Mexico, Nigeria and South Korea could be new letters in the acronym.

As the grouping expands, it will become impossible to retain the simplicity — not to mention the ability to pronounce an expanded acronym — of the word “Brics”. Perhaps a more accurate and ultimately more inclusive title will be the “E5”, that is, the emerging five, six and so on.

But beyond long-term growth forecasts, the Brics club will increasingly take on a political form, an emerging bloc representing the interests of the developing world. As the Brics summits become more institutionalised, the grouping could well become a counterweight to established Western interests – the Brics (that is, emerging five or E5) versus the G7.

We will hear at the Brics summit in Delhi this week of the need for a restructuring of the global economic architecture, one that takes into greater cognisance the needs of the developing world.

South Africa’s inclusion was driven by political interests. Pretoria wanted to punch above its weight and be regarded as a leading emerging market. Thabo Mbeki was always in his element when engaging with the developed world; Jacob Zuma is more comfortable associating with developing nations. I believe that when one looks back at the Zuma presidency, its greatest foreign policy success will be South Africa’s inclusion in Brics.

But beyond the new orientation of our foreign policy, we need to think about how to tackle the commercial imperative of membership.

A priority of South Africa’s department of trade and industry is to push regional integration in and beyond the Southern African Development Community (SADC), a region of 15 member states with a combined population of more than a quarter-billion. On paper, we are bigger than Brazil, Russia and Indonesia, but poor government-to-government co-ordination and inadequate infrastructure does not allow the exploitation of opportunities presented by trade liberalisation in the region.

Pretoria needs to make the benefits of integration more apparent to its neighbours. The “s” in Brics could ultimately stand for SADC, but it is as much a political sell as it is an economic one. An integrated regional market would strongly bolster our credibility as a fully-fledged member.

But when one strips out the political rhetoric, it is ironic that South Africa’s strategic political partners in the Brics grouping are now also its greatest commercial competitors. This is especially the case with China and India in terms of manufacturing and services, respectively. The management of our commercial relations with both powers will be a delicate balancing act in coming years. The South African government and organised labour represented by trade federation Cosatu are finding it difficult to come up with pragmatic policy responses to this rising competition. Rigid ideological positions will further hamper our ability to compete.

A major thrust of South Africa’s foreign commercial policy at the Delhi summit will be to encourage local beneficiation of the country’s resources. Brazil and South Africa share a common position because both are exporters of mostly raw materials to China, while importing large quantities of value-added manufactured goods. China is now both South Africa and Brazil’s number one trading partner. Intense competition from Chinese and Brazilian firms, which are supported by their own versions of state capitalism, is being experienced by South African corporations across Africa.

Chinese state-owned construction firms all but dominate the African infrastructure sector, whereas Brazilian companies are particularly pervasive in Angola and Mozambique. The rapid movement of Bric firms into Africa is challenging South Africa Inc’s presence in the region. Sectors bearing the brunt of competition are construction, mining, engineering, chemicals, pharmaceuticals and information technology. The Brics may have common strategic macro interests, but managing South Africa’s relations with Brics’s business interests in Africa will be a delicate balancing act in coming years.

In this edited extract from The Backroom Boy, an autobiography of the late Andrew Mokete Mlangeni by Mandla Mathebula, the ANC struggle stalwart meets Mao Tse-Tung while in military training in China
Read more
Friday

In ‘A Map to the Door of No Return’ Dionne Brand reads VS Naipaul as a sorrowfully spiteful narrator, full of the despair of exile
Read more
Africa