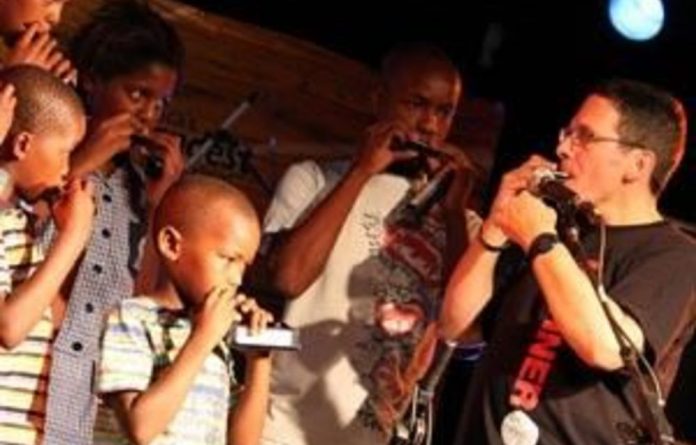 Mpilo is nine years old. His hand shoots up when renowned South African jazz musician Adam Glasser asks if anyone in the audience wants to learn how to play the harmonica.

It’s the first time Mpilo has ever seen this instrument. As he joins a bunch of other young volunteers on the stage, a whole new world opens up for him.

The beat goes on

We take a look at some of the highlights of this year’s Cape Town International Jazz Festival and chat to festival director Billy Domingo about the evolution of the globally acclaimed event.

Glasser has come to the Vuyisile Mini Centre in Cape Town’s Gugulethu township for a music workshop with a difference. It forms part of the Intyolo Jazz programme, jointly organised by the Cape Town International Jazz Festival’s EspAfrika and the Food and Allied Workers Union.

“To get different notes from the same hole on the harmonica you breathe out through it, and then you breathe in,” Glasser tells his eager-eyed volunteers. They follow his instruction and a cacophony of sounds fill the auditorium. Their faces light up and they listen again to the next instruction.

Do re mi fa so la ti do. All of a sudden things change for Mpilo and his young friends. He plays part of the scale and the audience, consisting of his peers, journalists and musicians, burst into applause.

Mpilo beams as he takes it all in. Then he joins the make-shift harmonica band again, inhaling and exhaling notes that they have never known before.

They are breathing music.

Mandla Gxanyana, Intyolo’s managing director, explains the programme’s rationale: “You get township kids who are musical enrolling for music degrees at various universities,” he says.

“The problem is that their counterparts from private schools have been doing music from a very early age, while they are only just starting from scratch, so they find themselves at an extreme disadvantage.”

Gxanyana hopes the ongoing Intyolo Jazz Programme will change all that. And, if the workshop was anything to go by, more kids like Mpilo will not only benefit from the joy of music, they’ll be able to pursue their passion at university level.

Fungai Tichawanga is the founder of Zimbojam: Zimbabwe’s biggest lifestyle, arts and culture website: www.zimbojam.com He was a participant in the CTIJF Mentoring Arts Journalists Programme.

SA jazz gets a new sound — the harmonica

Glasser back to brush up his act