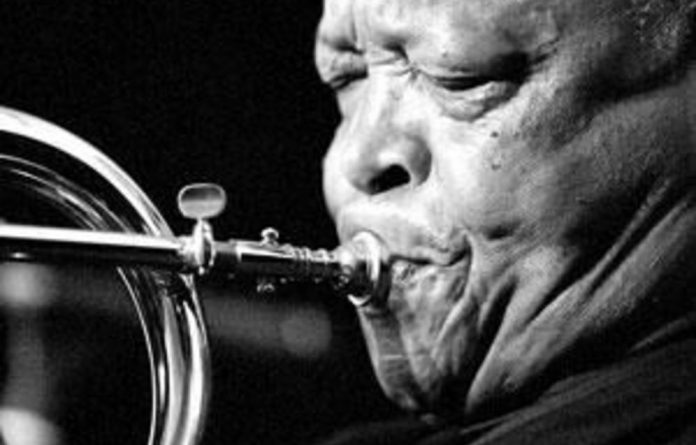 It has been a huge week for Hugh Masekela. Not only did he celebrate his 73rd birthday, but fresh from his performance at the Cape Town International Jazz Festival, he launched a new album and a record label.

The album, Friends, which launched on Sunday at the ­Mahogany Room in Cape Town, is a four-CD box set featuring Masekela and American pianist Larry Willis. It is a collection of 40 American jazz standards reinterpreted by the two musicians, whose friendship dates back more than 50 years, hence the title. Willis was in the country for the launch.

The quiet intimacy of the launch was in stark contrast to Masekela’s jiving performance at the jazz festival the previous night, where he was joined by Vusi Mahlasela, Thandiswa Mazwai and Zolani Mahola, playing to thousands in a special tribute to the late Miriam Makeba.

As people squeezed into the Mahogany Room, which at capacity seats 50, Masekela said: “It might be a small premiere, but it feels like a helluva one.”

He is a great storyteller and, from the start, enthralled the crowd with gems of detail. “We met in 1961 at the ­Manhattan School of music. I had just turned 21. We both loved music and were drawn to each other. Larry was an opera singer and he was dressed like George Washington. I looked at him and asked: “Man, what are you doing?!” Masekela found out that Willis played piano and they spent afternoons in the Bronx performing together.

“We’ve recorded together over the years. But we haven’t managed to get rid of each other,” he said, followed by deep laughter.

“We’re going to do the compositions that affected our lives,” he said, and with that, the two began a journey that delved into their history. The set consisted of Hi-Fly by Randy Weston, Easy Living made famous by Billie Holiday, Fats Waller’s Until the Real Thing Comes Along and Duke Ellington’s Come Sunday. Each song told a new story. About soul group the Stylistics’ song You Make Me Feel Brand New, Masekela said: “I said to Larry, ‘It’s an old R’n’B song’, but he said, ‘We’re going to play it because it’s pretty.'”

He continued: “The most unforgettable person in the world of music, aside from Miriam Makeba, is a man who never finished a paragraph without mentioning New Orleans. If it weren’t for him, we’d all be wearing white wigs,” and he headed into When It’s Sleepy Time Down South by Louis ­Armstrong.

Almost like jazz
The set ended with Masekela singing one of his favourite songs, Hoagy Carmichael’s 1929 hit Rockin’ Chair.

When Masekela first recorded in the United States, music critic Leonard Feather said: “Hugh Masekela can’t play jazz”. “I told Miles Davis this and he said: “As long as Feather spells your name right, don’t give a shit about anything else,” he said. The album Almost like being in jazz, which ­featured Willis, was ­Masekela’s response.

Last year, Rashid Lombard, the chief executive of the Cape Town International Jazz Festival, organised for Willis to perform at the festival. This coincided with Masekela’s nephew, Pius Mokgokong, building a studio on his farm in Pretoria and hence Friends was recorded there. Willis made six trips to the country to record the album.

Mokgokong initially built the studio at his home to practise music, but then decided to create a professional studio. When Masekela first visited it in 2010, he said: “Uncle, I’m going to dedicate this thing to you.” The album is the first to be released through the new record label, House of Masekela, of which Mokgokong is executive producer.

“Jazz artists die poor. We want to invest money in our musicians and make sure they benefit from their art,” Mokgokong said.

Friends is available countrywide and a Johannesburg launch of the album will be announced soon. Info: hughmasekela.co.za

Hugh Masekela and the irrecoverable idea of home