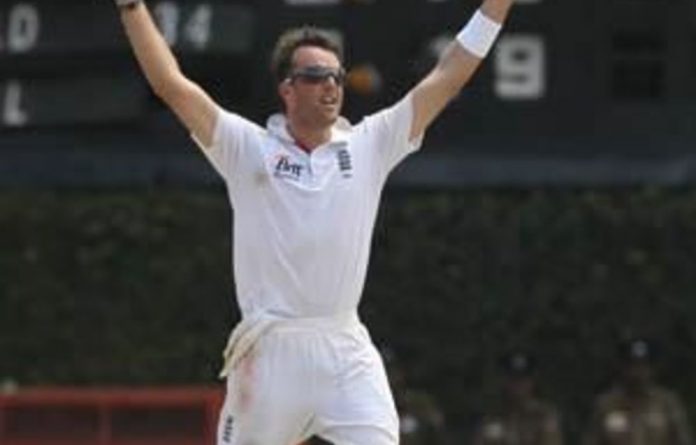 England offspinner Graeme Swann completed a career-best 10-wicket match haul to dismiss Sri Lanka for 278 in its second innings on Saturday, leaving the tourists with a winning target of 94 runs in two sessions to win the second test and level the series.

Resuming at 218-6, Sri Lanka batted through until just before lunch, surviving some close chances as the batsmen struggled to handle sharp turn and sometimes steep bounce at P. Sara Oval.

Anjelo Mathews was dropped twice at forward short-leg by Alastair Cook but the fielder was successful in his third attempt, dismissing Sri Lanka captain Mahela Jayawardene for 64.

Jayawardene faced 191 balls in his patient innings and hit four boundaries. His 90-run stand for the fifth wicket with Thilan Samaraweera promised to take Sri Lanka to safety but Swann’s two wickets in three balls in the penultimate over of the fourth day turned the tide toward England.

Slim victory
Mathews was last dismissed for 46 having stretched the lead to 93 and giving the home team a slim victory hope given England’s poor reputation in handling spin bowling and its recent debacle in the United Arab Emirates when it chased 145 for victory in the fourth innings but was bowled out for 72 on a turning wicket.

England has an opportunity to retain its No. 1 ranking in test cricket, needing a win to do so.

Swann finished the second innings for 6-106 runs for a match haul of 10-181; his best test bowling figures.

Sri Lanka was dismissed for 275 in its first innings and England made 460 in reply. — Sapa-AP