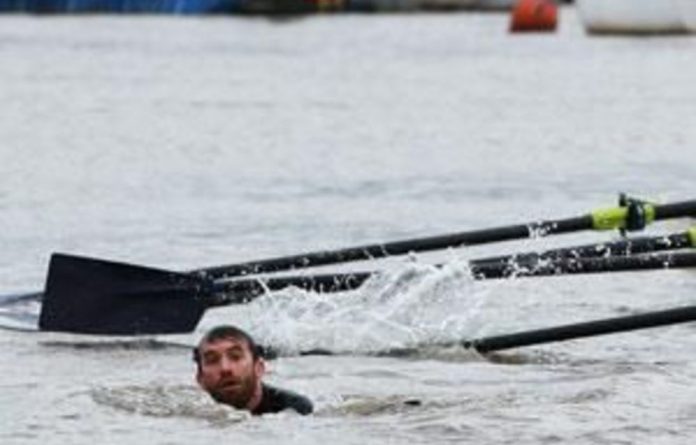 Britain’s historic Boat Race was dramatically disrupted Saturday when a wetsuit-clad protester swam across the River Thames, before Cambridge claimed a controversial victory over rivals Oxford.

The activist caused a half-hour hiatus in the race between England’s two oldest universities, which is in now its 158th year, but after it was restarted there was fresh chaos when one of Oxford’s oars snapped off.

The drama continued when an Oxford rower collapsed after crossing the finish line and required medical treatment.

The security breach by the protester raises questions ahead of the 2012 London Olympics which starts in July, as well as at Queen Elizabeth II’s Diamond Jubilee in June.

Scotland Yard later said the swimmer had been arrested on suspicion of a public order offence and was being held in custody. It did not give any further details.

“I am swimming into the boats in the hope I can stop them from completing the race and proposing the return of surprise tactics,” he apparently wrote.

The two boats were about eight minutes into the race with Oxford about a third of a length ahead when the man wearing a black wetsuit swam in front of the two boats, and was nearly hit by the oars of the Oxford crew.

Spectator Mike Emerson said he had seen the man in his early 20s come through the trees on the south bank of the river and then get into the water long before the boats came past.

“He started swimming, he knew what he was doing,” Emerson (60), from Cambridge, told AFP.

“He drifted down the river and then he waited near a pontoon until the boats came, and then he deliberately swam out toward the boats.”

Wet behind the ears
The man was pulled out by a lifeboat crew and appeared to have a broad smile on his face.

Police boats and dinghies with flashing blue lights sped down the river to the scene and police helicopter circled the scene, an AFP reporter said.

Both teams stopped rowing and umpire John Garrett halted the race after reserve umpire and former British Olympic rower Matthew Pinsent spotted something in the water.

“He [Pinsent] thought it was some debris and then we realised that it was actually a swimmer,” Garrett said.

“We weren’t sure what was going to happen, whether he [the swimmer] was going to get out of the way in time and then it was quite clear he was just waiting for the boats to come across him, so I had to stop the race and restart.”

It restarted around half an hour later but seconds after that the crews clashed and one of the Oxford oars snapped off, leaving them trailing far behind by the end of the race.

There was further drama after the finish when Oxford crew member Alex Wood (27) collapsed in the boat and had to receive medical attention.

Pinsent said he had seen Wood afterwards and he was sitting up and was conscious.

“I think it’s hard to imagine a Boat Race that contained so much to talk about,” Pinsent told the BBC.

A sinking event
The traditional post-race presentation ceremony was abandoned.

The last time the Boat Race was restarted was in 2001 when the crews clashed and one of them lost an oar.

Once just an event for undergraduates at Oxford and Cambridge, the Boat Race has become an increasingly international event, with a succession of top-class rowers from around the world eager to take part.

The disruption to Saturday’s race raises questions about security ahead of an eventful summer in Britain.

While rowing events for the London Olympics this summer will be held at a closed course in Windsor, west of the capital, a flotilla marking the queen’s 60 years on the throne is set to proceed down the Thames in June. — AFP

A new book has collected writing about the condition of living, yes, with a high crime rate, but also other, more pervasive existential urban stresses particular to the Global South
Read more
Friday

Steve McQueen’s ‘Lovers Rock’, part of the ‘Small Axe’ anthology, is an ethereal interlude that takes us inside the blues party bubble
Read more
Environment

Due to covid-19, there are aeroplanes jetting about with few, if no passengers in them, which means those planes are releasing unnecessary greenhouse gases that will trap heat and warm this planet for decades to come
Read more
Analysis