Putting a price on despair 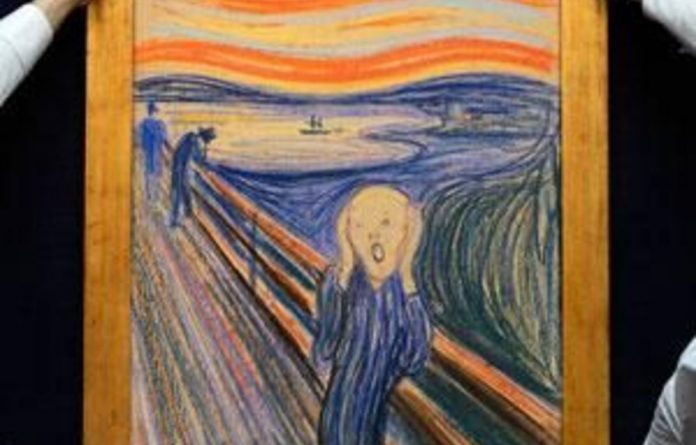 A version of The Scream, one of the world’s most famous paintings and an iconic image of despair, has been put on public show at Sotheby’s in London. It will go on sale this May in New York, where it is expected to fetch at least $80-million.

Norwegian businessman Petter Olsen, whose father was a friend and patron of Scream painter Edvard Munch, owns the work, which will go on the block in New York on May 2, headlining the Impressionist and Modern Art sales.

Sotheby’s described The Scream as “one of the most instantly recognizable images in both art history and popular culture, perhaps second only to the Mona Lisa.‘

There are four versions of the painting, which features a man screaming and clutching his head against a wavy, brightly-colored landscape, but this is the only one in private hands.

The influence of the disturbing picture, described by Munch as recording a moment of paralysing anxiety during a walk with friends in the hills above Oslo, has few parallels.

Dating from 1895, The Scream offered by Sotheby’s was done in pastel and is the only one in which one of the two figures in the background turns to look outward.

On two occasions, other versions of the painting have been stolen from museums, although both were recovered.

Global consciousness
Andy Warhol and The Simpsons have referenced the painting and it has been featured in countless books, films and exhibitions.

Copies have adorned everything from student dorms to tea mugs and the work is arguably one of the few known equally to art experts and the general public alike.

“Instantly recognisable, this is one of very few images which transcends art history and reaches a global consciousness. The Scream arguably embodies even greater power today than when it was conceived,” he said in a statement.

Troubled past
Olsen said in a statement that he wants proceeds from the sale to go toward establishment of a new museum and hotel on his farm in Hvitsten, Norway.

Munch died in his native Norway in January 1944 at the age of 80. In a poem the artist inscribed on the frame of the version coming up for sale, Munch wrote of feeling “deathly tired” and while letting his friends walk on, “I remained behind/ shivering with Anxiety — I felt the great Scream in Nature.”

The two thefts only added to The Scream‘s intensely high profile. In 1994, at the start of the Winter Olympics in Lillehammer, Norway, thieves took the primary version from the National Gallery in Oslo. It was returned unharmed later that year.

A decade later, masked gunmen stole the 1910 version from the Munch Museum in Oslo, along with another of his works. Both were recovered two years later. — AFP

The heart of Maboneng beats on