Mike Tyson: The cat among the pigeons 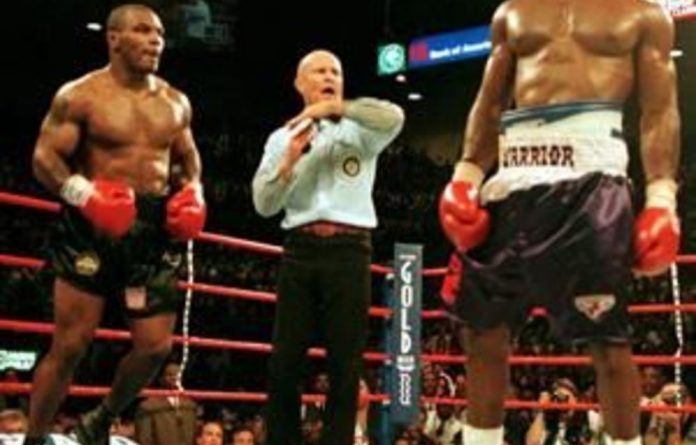 Former heavyweight champion Mike Tyson is back with a one-man show that addresses his life, divorce and time in jail. So why is he so determined to duck a few simple questions?

Last Friday. My cellphone rings. “Hi John. It’s Caity, Mike Tyson’s PR in New York. I’ve got Mike with me in Las Vegas. If you can just hold on a few seconds, I’m going to patch you through on a conference call.” About a minute later …

Mike Tyson: Hi, John. It’s good to be speaking with you.

JC: And you, Mike. You were once called “the baddest man on the planet”. How scared should we be of you now?

Mike Tyson. Once described as ‘the baddest man on the planet’, he now says he is a ‘pussy’. (Blake Sell, Reuters)

MT: Not at all. I’m a pussy now. Sign of the times, John, that being a wimp is considered a good thing to be these days. I’m just keeping my mouth shut.

JC: Your show in Las Vegas is called Mike Tyson: Undisputed Truth. What undisputed truths are we going to learn that we don’t already know?

MT: You’re going to have to come to the show to find out.

JC: Umm … but can you just give me a flavour?

MT: When I was in prison, I got one of the … [the line isn’t that good and Tyson isn’t talking that distinctly and what I hear is] … wardens pregnant.

JC: What? You got one of the wardens pregnant?

MT: That’s not what I said, John. You’re trying to misquote me.

JC: I’m seriously not. I want to make sure that I heard you accurately. If I got it wrong then I want to correct it.

MT: Okay. What I said was that I got one of the counsellors pregnant. There’s a big difference.

JC: I’m sorry. Did the counsellor have the baby?

MT: No. I don’t think so. She was married or something.

JC: And what else will you talk about in the show?

MT: My life. My divorce. My rape conviction.

JC: Do you still maintain you were wrongly convicted?

MT: I’ve always maintained that because it’s true. In the United States they get people to make false confessions. You must know that. You must have heard of the Memphis Three. My lawyer was bullshit. If I was really guilty as they said, they would have given me 63 years, not three years. So why do you think they let me out after three years? It certainly wasn’t to do me a favour …

I can sense the interview is going pear-shaped and that most of my prepared questions are almost certainly off limits. So I lob in an easy one to try to get Tyson back on side.

JC: You’ve been off drugs and alcohol for a while now. Just how long exactly?

MT: Three and a half years. And I’ve been a vegan for three. I’m just trying to be normal. I’m not doing these shows to be a star. I’m not expecting to get rich or anything. I’m doing them because they feel like a good thing to do.

JC: Surely the early years of your boxing career, when you were the youngest-ever world champion, can’t feel like a failure?

MT: The 1980s are dead to me. The boxing is just memories. These days I’m just trying to make a living.

JC: But what about when you were inducted into the Boxing Hall of Fame [in June 2011]?

MT: It was a good day, but it was only one day. I come home and I’ve got to pay my bills. I’ve still got my life to live. I can feel the conversation closing in as Tyson’s replies are getting shorter. I retreat to safe ground.

JC: You kept racing pigeons as a kid. Do you still race pigeons?

MT: Sure. I started when I was eight or nine years old and it stays in your blood.

JC: Have you got any champions?

JC: What races have they won?
MT: New York … [the rest of the answer is inaudible and I don’t have the nerve to ask him to repeat]. The competition is tough, I’m up against people who have been doing this for 40 years. But why are you asking me about pigeons? What’s that got to do with my show? I’m here to talk about my show.

JC: OK. It’s said you’ve made and lost $300-million in your career. Where did all the money go?

MT: Managers ripped me off and I was reckless. I’m horrible with money. Even if I hadn’t been ripped off, I would have found some way to lose it.

JC: Were you ever asked to throw a fight?

JC: The Evander Holyfield fight. Did you bite his ear deliberately?

MT: I don’t want to talk about that.

JC: But it’s part of your story. We’ve got to talk about it.

Tyson’s PR interrupts the interview and suggests I keep my questions to current events and relevant topics. I try to oblige.

JC: Last year, you and your wife appeared on an Argentinian TV dance show. Are you a good dancer?

MT: No. I’m a horrible dancer.

JC: Why did you withdraw from the show?

MT: I didn’t withdraw from the show. Who told you that? You’ve got your facts wrong again.

JC: I’m sorry. That’s how it was reported. If you weren’t voted off the show and you didn’t withdraw, how come you didn’t progress in the competition?

MT: I don’t know. They just didn’t continue the show with me. By now, I’m scrabbling to think of any question that might not annoy Tyson.

JC: You once gave a pair of signed boxing gloves to Cristiano Ronaldo. Are you a big fan of his?

MT: Why are you asking me about someone else? I’m here to talk about Undisputed Truth. I feel like you’re deliberately antagonising me.

JC: I apologise if you feel that way. Your show is called Undisputed Truth so I thought all areas of your life were up for discussion.

Tyson’s PR comes back on the line after he hangs up.

“I’m sorry about that, John. I think Mike felt that some of your questions weren’t quite relevant to the show. A bit left-field. He’s been a little worn down lately.” —

Tyson to new fighters: Never end up like me

Budget airlines not so cheap after all