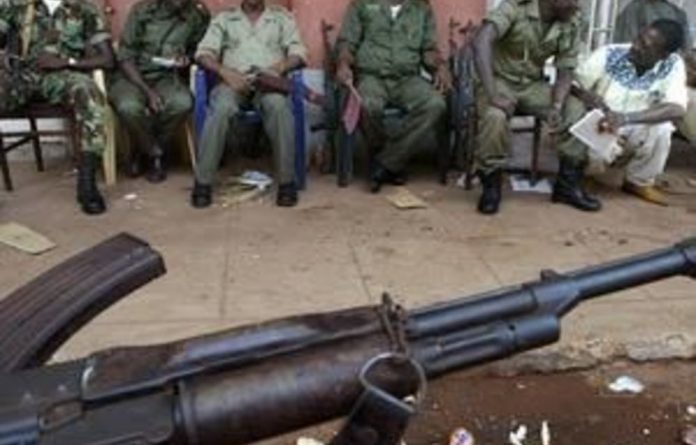 Guinea-Bissau troops staged a coup attempt on Thursday, attacking the prime minister’s residence, arresting politicians and taking over the ruling party headquarters amid a media blackout.

Gunshots and rocket-propelled grenades were fired in the darkened streets of the capital of the putsch-prone former Portuguese colony, which is in the middle of a bitterly disputed two-round presidential election.

Soldiers attacked the residence of the first round winner, outgoing Prime Minister Carlos Gomes Junior, whose whereabouts were unknown.

“It was attacked with rocket-propelled grenades and we were forced to retreat,” said a police officer who had guarded the building. He said Gomes had been there earlier but could not give his current location.

“There was a panic and a riposte from our colleagues. He [Gomes] attempted to get out amid the confusion. I don’t know what happened after that because I too looked to get out of there,” he added.

A military source said: “We are actively seeking Carlos Gomes Junior. Regardless of where he is hiding, we will track him down before dawn.”

The sound of gunshots could be heard for around an hour, centred around the prime minister’s residence, before relative calm returned to the capital.

Several political figures were “arrested” in the capital and taken to the army headquarters of Amura, near the coast, a military source said on condition of anonymity.

“They are with us in the Amura fortress, the headquarters,” he added, without revealing the identities of any of those seized.

Coup underway
“We have received some difficult information from Guinea-Bissau, and this information indicates to us that there is a coup underway,” the minister told reporters after a meeting of the 15-nation regional group in Mali.

“Ecowas formally and rigorously condemns such an attempted coup d’état,” he added.

On the ground, ambulance sirens were heard across Bissau, which was plunged into darkness as electricity was cut off, while civilians stayed off the streets.

Soldiers earlier took control of the ruling party headquarters, where at least 20 troops were deployed and the national radio station, which stopped broadcasts as did state television.

Troops also formed a cordon around the presidential palace, and the fate of interim head of state Raimundo Pereira was not immediately known.

Soldiers, in groups of four or five and armed with rocket-launchers, rocket-propelled grenades and Kalashnikov rifles, patrolled the main roads of Bissau.

They were posted outside the UN office in the capital and at embassies.

No casualty figures were available. There were no signs at the Simao Mendes central hospital of any early casualties of the attempted coup.

Violence had been feared for days in the election period in the impoverished country, which has a history of political violence and is known as a major drug trafficking hub between South America and Europe.

Guinea-Bissau’s opposition — led by second-placed Kumba Yala, an ex-president who claims the first-round vote was rigged — have called a boycott of the April 29 run-off vote and warned against campaigning.

Boycotting in the name of ‘justice’
The five main opposition candidates including Yala said at a joint press conference Thursday that the boycott would be in the name of “justice”.

“Whoever dares to campaign will be responsible for what happens,” Yala warned, without elaborating.

He earlier denounced “massive fraud” in the first round on March 18 and stressed: “I have said and repeat it: I do not want a second round.”

Gomes garnered 48.9% of the votes on March 18 and Yala 23.26%. The election campaign for the second round was supposed to start on Friday and end April 27.

Since winning independence through armed combat in 1974, Guinea-Bissau’s army and state have remained in constant, often deadly conflict, with the result that no president has ever completed a full term in office.

Three have been overthrown and one was assassinated in office in 2009.

The latest election was held after the last president, Malam Bacai Sanha, died in January following a long illness.

The UN Security Council last Saturday urged Guinea-Bissau candidates and voters to “exercise restraint” ahead of the presidential run-off.

The 15-member council urged the country’s political leaders to “resolve their disputes in accordance with the constitutional framework”.

They underscored the importance of successful elections to progress on peace-building priorities including demobilizing troops and police, fighting drug trafficking and promoting national reconciliation. — Sapa-AFP