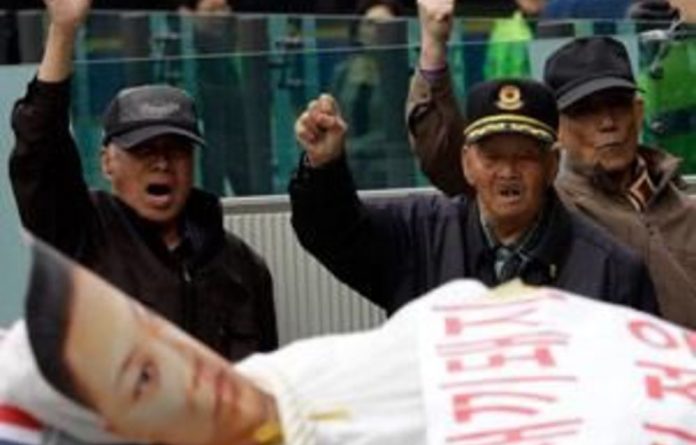 North Korea admitted its much hyped long-range rocket failed to deliver a satellite into orbit on Friday while US and South Korean officials said it crashed into the sea a few minutes after launch, dealing a blow to the reclusive state.

Pyongyang had defied international pressure from the US, the UN and others to push ahead with the launch timed to celebrate the 100th birthday of Kim Il-sung, the deceased founder of the state, and to coincide with the ascent to power of his grandson Kim Jong-un.

Even close ally China had warned against the launch and South Korean intelligence officials have said North Korea may be ready to follow it up with a nuclear test as it did after a rocket launch in 2009, even though it could face more UN sanctions if it did.

“The earth observation satellite failed to enter its preset orbit,” a newsreader said on North Korea’s state TV. “Scientists, technicians and experts are now looking into the cause of the failure.”

It was an unusual admission of failure by the unpredictable regime, since it will be seen by its 23-million people who are only given access to state-controlled news sources. A similarly-failed launch in 2009 was touted by the North as a success.

Friday’s launch breached the terms of a recent aid deal struck with the US as well as UN sanctions. Washington, Tokyo and Seoul issued sharp rebukes and said they would step up cooperation and vigilance.

Enhancing capabilities
North Korea said it wanted the Unha-3 rocket to put a weather satellite into orbit, although critics believed it was designed to enhance its capacity to design a ballistic missile to deliver a nuclear warhead capable of hitting the continental United States.

The rocket crashed in a sea that separates the Korean peninsula from China off the west coast of South Korea after flying 120km from its launch site close to the Chinese border, officials in Seoul, Washington and Tokyo said.

The North American Aerospace Defence Command, Norad, said the first stage fell into the sea west of South Korea, and the remainder of the satellite-carrying missile was deemed to have failed.

“No debris fell on land,” Norad said. “At no time was the missile or the resultant debris a threat.

The world’s most militarised border separates North and South Korea and the two states remain technically at war after an armistice ended the Korean War in 1953.

South Korea said it was dispatching ships to try to retrieve the rocket, which it said split into 20 fragments as the first and second stages failed to separate, showing that the new rocket had failed to travel as far as the previous one in 2009.

A Russian observer, a space policy expert from the Russian Academy of Cosmonautics, said in Pyongyang that long range rocket launches took time to perfect.

Loud complaints
“So I would be quite surprised if the third launch of a North Korean rocket would end up in a success, although I believe that they had from 60% to 70% chance to successfully put the satellite into orbit,” said Yuri Karash.

The launch was announced just weeks after a “Leap Year” deal that saw Washington agree to provide food aid. Among the promises made by Pyongyang in return was that it would not launch a long range rocket or undertake nuclear tests.

Loud complaints from the US, South Korea and Japan will likely lead to pressure for more sanctions to close Pyongyang’s access to trade that could aid the North’s programme, although China would probably resist even though its diplomacy failed to stop the rocket.

“After giving so much aid to North Korea, it still did not listen to China, and this hurt China-North Korea relations and erodes domestic support in its continued support of North Korea,” said Shen Dingli, a professor and regional security expert at Shanghai’s Fudan University.

“This also undermines confidence in the US-China relationship, and whether China had done enough to persuade the North. So, China is also a loser, but not as big a loser as if North Korea succeeded in its launch,” he said.

A tough push for sanctions, which Japanese Prime Minister Yoshihiko Noda pledged, could lead a show of defiance from the North such as a a nuclear test, or an attack like the one in 2010 that saw it shell a South Korean island, killing civilians.

“Rather than any conventional provocation, I think North Korea will watch what U.S. and South Korea are doing and prepare for a nuclear test,” said Chung Young-chul, a professor at Sogang University’s Graduate School of Public Policy.

It even invited foreign media in to cover the birthday celebrations and showed them the launch site.

Kim was named First Secretary of the Workers Party of Korea on Wednesday, as he accumulates titles and posts similar to those held by his father, Kim Jong-il.

State newspaper Rodong Sinmun on Friday dubbed him “the sun whom all the party members, service personnel and people of the DPRK [Democratic People’s Republic of Korea] acclaimed out of their heartfelt desire”.

“[There is] no question that the failed launch turns speculation toward the ramifications for the leadership in Pyongyang: a fireworks display gone bad on the biggest day of the year,” said Scott Snyder of the Council on Foreign Relations.

Although North Korea is one of the most tightly controlled states on earth, with no free media and a tight grip on its population, such a high profile failure could trigger a backlash among the country’s elite and places question marks over Kim Jong-un.

“This is the first crisis for the new leader that has just taken over,” said Lee Jong-won, a professor at Waseda University in Tokyo.

“It is inevitable that they will look to find who is responsible for the failure, and I wonder what the treatment will be for those in the military and the hard-line officers who have pressed for the launch.” — Reuters