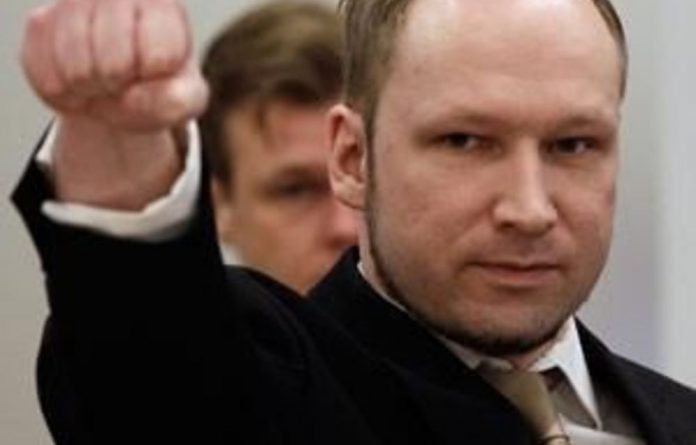 The Norwegian far-right militant who massacred 77 people last summer gave a clenched-fist salute, smirked at the court and pleaded not guilty on the first day of a trial that threatens to turn into a “circus” showcasing his anti-Islamic views.

Anders Behring Breivik (33) has said he acted in defence of his country by setting off a car bomb that killed eight people at government headquarters in Oslo last July, then killing another 69 people in a shooting spree at a summer youth camp organised by the ruling Labour Party.

The real question of the trial will be whether Breivik will be declared insane or guilty. While he risks being kept behind bars for the rest of his life, the high school dropout has said being labelled insane would be a “fate worse than death”.

Listening impassively for hours as prosecutors read out an indictment detailing how he massacred teenagers trapped on a holiday island outside Oslo, he only shed tears when the court later showed one of his propaganda videos.

Wearing a suit and loosely knotted tie, Breivik entered the court in handcuffs, which were taken off just before he was seated. He smirked several times as the cuffs were removed, put his right fist on his heart then extended his hand in salute.

“I do not recognise the Norwegian courts. You have received your mandate from political parties which support multiculturalism,” Breivik told the Oslo court after refusing to stand when judges entered.

“I acknowledge the acts but not criminal guilt as I claim self-defence,” he added, seated in front of a bulletproof glass wall.

Without visible emotion
Occasionally suppressing a yawn and sipping water, he stared down at the indictment papers, following without visible emotion the list of his killings as the prosecutor read out each one. Some details were so graphic that Norwegian television bleeped out descriptions of the massacres.

Breivik wiped away tears several times while watching a movie of still pictures accompanied by text of his vision of the evils of “multiculturalism” and “Islamic demographic warfare”.

“I think he feels sorry for himself,” said Mette Yvonne Larsen, one of the main lawyers representing victims. “His project didn’t work out, that’s why he’s crying. He’s not crying for the victims … he’s crying over his extremely childish film.”

The trial is scheduled to last 10 weeks and has raised fears that it could reopen wounds in Norway, a country that prides itself on its tolerant and peaceful society.

The “lone wolf” killer intends to say he was defending Norway against multiculturalism and Islam. He says the attacks were intended as punishment of “traitors” whose pro-immigration policies were adulterating Norwegian blood.

More than 200 people took seats in the specially built courtroom while about 700 attack survivors and family members of victims watched on closed-circuit video around the country.

“Today the trial starts, and it will be a tough time for many,” survivor Vegard Groeslie Wennesland (28) said outside the courtroom. “Last time I saw him in person he was shooting my friends.”

Some Norwegians fear Breivik will succeed in making the trial, with about 800 journalists on hand, a platform for his anti-immigrant ideas. His defence team has called 29 witnesses to shed light on his world view. Norway’s legal system gives defendants wide leeway to defend themselves as they wish, but judges can trim the witness list.

Death threats
His proposed witnesses include Mullah Krekar, the Kurdish founder of Islamist group Ansar al-Islam, who was recently jailed in Norway for making death threats, and “Fjordman”, a right-wing blogger who influenced Breivik. He is scheduled to testify for about a week, starting on Tuesday.

Breivik had been living with his mother in Oslo preparing for the attacks before renting a farm in order to make a fertiliser bomb.

Last July 22, he set off the bomb in the centre of Oslo before heading to the youth camp on Utoeya island in a lake 40km outside the capital, gunning down his victims while police took more than an hour to get to the massacre site in the chaos following the blast.

Disguised as a police officer, Breivik managed to lure some of his victims out of hiding, saying help had arrived. Other victims jumped into the lake, where he shot them in the water.

Reading out the indictment, prosecutor Inga Bejer Engh spoke of the “panic and mortal fear in children, youths and adults” trapped on the island.

Prosecutors painted an image of a Breivik obsessed with the World of Warcraft computer game, prompting the judge to ask whether the game was violent. Breivik broke into a smile when the image of his online character was displayed.

“Your arrest will mark the initiation of the propaganda phase,” Breivik wrote in a manual for future attackers, part of a 1 500-page manifesto he posted online. “Your trial offers you a stage to the world.”

‘Circus’
In a recent letter seen by the Norwegian newspaper VG, Breivik said: “The court case looks like it will be a circus … it is an absolutely unique opportunity to explain the idea of [the manifesto] to the world.”

An initial psychiatric evaluation concluded that Breivik was criminally insane while a second, completed in the past week, found no evidence of psychosis. Resolving this conflict could be the five-judge panel’s major decision.

Accessible through airport-style security, the courthouse was barricaded by TV trucks as 200 media organisations have descended on Oslo, home of the Nobel Peace Prize.

The courtroom, the country’s biggest, can seat just over a tenth of the journalists, victims and relatives wishing to attend, so closed-circuit viewing rooms have been set up nearby and in 17 other courthouses around Norway.

The trial will also examine Breivik’s initial claim that he was part of an organisation of “Knights Templar” with similar views. Police said evidence now points to solitary attacks by Breivik after years of radicalisation. — Reuters