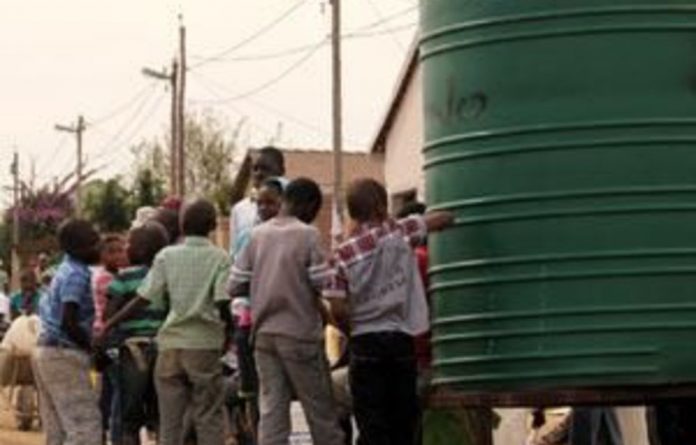 Drinking water tanks stood empty, taps stayed dry, and children roamed the streets of Diepsloot on Tuesday, as the water crisis in the area intensified.

With no word on when they’d have water again, residents have started to worry.

There is much that can not be verified in Diepsloot. Residents say the drivers of city water tankers have been seen accepting bribes for priority access to the water they transport from Lanseria, but no reliable first-hand accounts could be had.

Several people who drank tap water in the area over the weekend (including this reporter) experienced nausea, cramps and diarrhoea, but the link between such symptoms and the water is inconclusive at best.

Some things are certain, though — people are starting to get thirsty.

“We don’t have money to buy drinks,” said a man waiting at an empty stationary water point on Ubuntu Street. “There is no water out of the taps, otherwise I would drink that, even if they say it is dangerous.”

Flyers printed in English and Johannesburg metro police with loudhailers on Tuesday continued to advise residents not to drink tap water, after tests conducted on samples drawn on Sunday and on Monday showed contamination. But Jo’burg Water could not specify the nature of the contamination, nor estimate when water supplies would be back to normal. It said a fleet of 12 tankers running a 40-kilometre round-trip to feed 65 stationary water points was adequately supplying the township.

At the Ubuntu street tank residents waiting in the noonday sun said they had not seen a tanker all day. Up the road another tank was also dry, as was a third, although that had lasted until early morning. Closer to Diepsloot Mall, a clear indication of the township’s relative prosperity, a tanker had visited earlier, and women, many with infants, were waiting patiently in line for the five minutes it takes to fill a 20-litre bucket of water from a single tap. That will give them enough to drink and cook, they said, but with nothing to spare.

“I don’t want to go to work because I’m dirty,” said one. “I can’t flush my toilet, what am I going to do now?” asked another. Schoolchildren, meanwhile, roamed the streets. They had been sent home at 11am, they said, and short schooldays would continue until the water supply was restored. Some joined parents in dodging traffic across the N14 highway, to fetch water from businesses with boreholes on the other side.

Water stopped flowing to parts of the township on Wednesday, when a contractor working on a sewerage line damaged a water pipe. Since then water has been available intermittently, with the first warning of possible fecal contamination coming on Friday.

In between, and over the weekend, may residents say, they drank tap water, especially after they received word that two samples had been tested and found the water drinkable.

On Tuesday confusion continued. Some residents had heard, correctly, that tests had indicated water in one section of the township was safe to drink, and would be turned back on. Many more had heard different versions: that all the water was safe, that none was safe, that the problem was a technical one rather than contamination, that water had been diverted to nearby rich suburbs, that this was a plot to drive people out of Diepsloot. While theories proliferated, though, plans did not.

“What am I going to do?” said a single mother with a baby on each hip. “I’m going to sit here and wait for the water to come. There is nothing else I can do.”

The city said the results of new tests done on water found to be contaminated will only be available late on Tuesday.

“Samples were taken this morning at 2am. The results will only be available very late tonight,” said spokesperson Millicent Kabwe.

She said the city would release a statement on the results early on Wednesday morning.

“The only area which is safe at this point is Diepsloot West. The Diepsloot West pumps will therefore be opened for normal use later tonight [Tuesday].” — additional reporting by Sapa