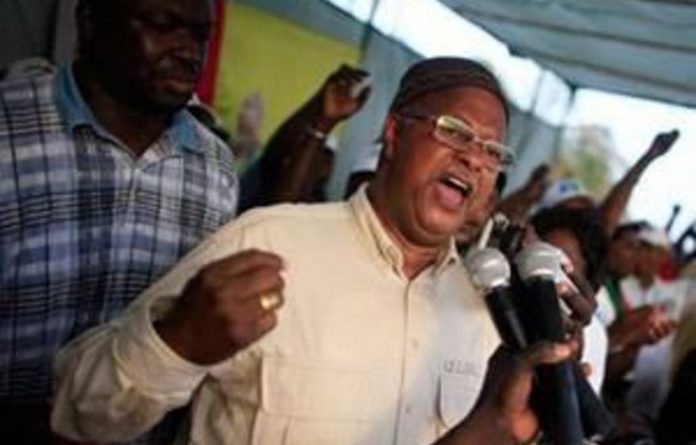 Guinea-Bissau’s new ruling junta banned marches on Tuesday and warned it would crack down on demonstrators as the African Union suspended the country over last week’s military coup.

The junta’s threat of “severe repression” against any demonstration or march came amid growing international pressure on the leaders of the April 12 coup, after the AU levelled a threat of sanctions against the putschists.

The junta launched an “appeal to the whole population … to refrain from organising any march or demonstration, whether for or against the overthrow of the government of Carlos Gomes Junior”, it said in a statement.

“Those who disobey the order [face] severe repression,” it added.

The ban followed rumours in Bissau that young supporters of former prime minister Gomes were planning a protest on Tuesday afternoon in the capital.

“Given the frequency of coup d’etats in Guinea-Bissau, council requests the [AU] commission in consultation with Ecowas … to submit to it within two weeks a decision or proposals for additional sanctions against the perpetrators,” he said.

The pan-African body previously condemned the coup as “outrageous”.

The junta’s ban announcement came after the departure from Bissau of a high-ranking team of Ecowas mediators who said they had agreed to restore civilian rule.

“We agreed on the fact that the soldiers accept the decision of Ecowas … which demanded the restoration of constitutional order,” the president of the bloc’s commission, Kadre Desire Ouedraogo, said after meeting the putschists.

“We demanded the release of prisoners, which constitutes an essential condition for the return of constitutional order,” Ouedraogo said.

He did not elaborate but warned that Gomes would not be allowed to take part in future presidential elections.

The coup aborted a presidential run-off vote set for April 29, an election whose validity was already in doubt after several candidates, including first-round runner-up Kumba Yala, condemned the polls as fraudulent and declared a boycott.

Despite international calls for the run-off to go ahead, the army dissolved all existing institutions and declared a national transitional council together with opposition parties.

Continental powerhouse South Africa also added its voice on Tuesday to those condemning the coup, a list that already included the UN security council, the United States, Canada, the AU and Ecowas.

“South Africa deplores the recent developments in Guinea-Bissau, particularly the military intervention … which has led to the imprisonment of several Bissauan politicians and left the country in a state of uncertainty,” the foreign ministry said, calling for the military to let elections go ahead.

‘Growing repression’
Amnesty International called for the junta to “publish the number and names of people arrested” since the coup and denounced the “growing repression” in the country.

On Monday five Guinea-Bissau presidential hopefuls also condemned the coup on Monday, but some observers called their action into question.

“There is a contradiction,” said a diplomat based in Bissau.

“They are negotiating at the same time they are condemning,” he said, noting however that it could be “a way to not lose out to the international community” which has threatened sanctions or even legal action against the putschists.

The coup leaders justified their power grab by claiming there had been a “secret deal” with Angola to undermine the army, but have since repeatedly pledged to restore civilian rule.

Junta spokesperson Na Walna accused Gomes of handing a secret letter to Angolan authorities in which he asked the UN chief to send troops to Guinea-Bissau “even though our country is not at war”.

Angola is “an expansionist country which intervened in Côte d’Ivoire, in Congo to replace [former president] Pascal Lissouba and elsewhere in Central Africa”, he said. — AFP