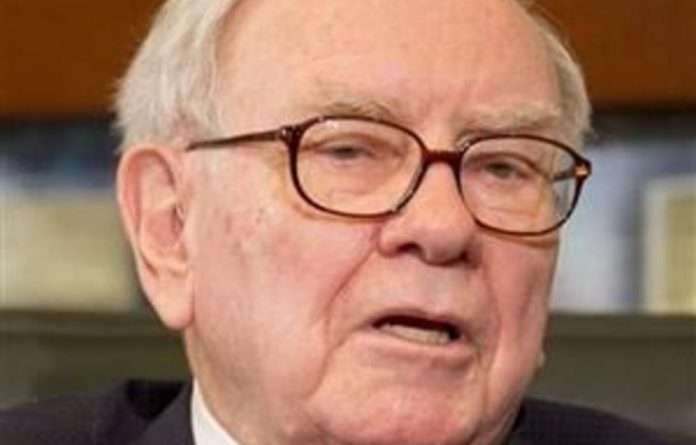 Berkshire Hathaway chief executive Warren Buffett disclosed on Tuesday that he has stage one prostate cancer but said his condition “is not remotely life-threatening or even debilitating in any meaningful way”.

Buffett said in a statement he will begin a two-month treatment consisting of daily radiation treatments starting in mid-July. This will limit his ability to travel during that time, he added.

The news from the 81-year-old Oracle of Omaha is likely to intensify the already brewing debate about the succession plan at Berkshire Hathaway, a conglomerate that employs more than 270 000 people in more than 70 businesses around the world.

Buffett told investors in late February that Berkshire had identified his successor, but in typically circumspect fashion, declined to say who it was — and ultimately admitted that even the chosen one does not know, himself.

The news comes one day after Republicans in the US Senate blocked the “Buffett rule”, a tax on millionaires whose idea was born of a now-famous editorial Buffett wrote in the New York Times last year, saying the rich had an obligation to pay more income tax.

That debate ensnared Buffett’s secretary as well. After Buffett said she paid more taxes than he did, US President Barack Obama invited Debbie Bosanek to attend this year’s State of the Union address.

Berkshire shares fell 1.5% in after-hours trading following Buffett’s announcement. The widely held Class B shares are up 5.9% year-to-date, half the gains of the broader S&P 500.

Stifel Nicolaus analyst Meyer Shields, in a note to clients, said he expected some weakness in the stock on Wednesday but added the news did not necessarily make the succession worries behind his “hold” rating any more imminent.

Panic expected, not needed
One Berkshire investor said it was reasonable to assume people would panic at the news of Buffett’s illness, but that nothing had actually changed in the case for the stock.

“Despite the news, this is not a reason to sell [Berkshire]. Fundamentals are still good at the company and the clear succession plan does give clarity about the future path of the firm,” said Michael Yoshikami, chief executive of Destination Wealth Management in California.

Another Berkshire investor who has written books about Buffett’s investment strategies said the news could have been much worse and was, ultimately, not a surprise.

“He’s mortal, we knew that,” said Jeff Matthews, author of the book Secrets in Plain Sight. “I think it means zero for Berkshire investors. He’s been getting the company ready for the day he dies.”

One sceptic, though, said the news could at least put a cap on the stock, which has underperformed in recent years.

“The uncertainty will diminish the upside to this company,” said Doug Kass of Seabreeze Partners in Palm Beach, Florida, which owns B shares.

Good prognosis
The situation may not be that uncertain, though — medical professionals said Buffett faces good odds, even at his age.

Any man diagnosed with stage one prostate cancer “has an excellent long-term prognosis”, said Jonathan Wright, a urological oncologist at the University of Washington and the Seattle Cancer Care Alliance. “The cancer is in a very curable stage.”

Buffett’s radiation therapy is standard care. Since the beam is extremely focused, there should be minimal side effects, though mild fatigue and a temporary worsening of urinary and bowel function are not uncommon, according to Mark Litwin, a researcher at UCLA’s Jonsson Comprehensive Cancer Centre and chairperson of the Department of Urology.

“Those dissipate quickly,” said Litwin. “A patient is usually able to work while receiving radiation treatment.”

One in six US men will get prostate cancer, but only one in 36 will die of it, according to the American Cancer Society. Some doctors even questioned why Buffett was even receiving treatment, given his age and since “active surveillance” is often an option.

“A good number of men with low risk cancer of the prostatecan be observed without needing to be treated,” said Louis Potters, chairperson of radiation medicine at North Shore-LIJ in New York.

Annual meeting scaled back
Buffett’s condition will now be centre stage at Berkshire’s annual meeting on May 5. The festival-like event draws more than 40 000 shareholders to the company’s headquarters in Omaha, Nebraska.

This year’s meeting was expected to focus to some degree on succession, as well as the investment case for Berkshire. For the first time ever, Buffett is expected to take questions from sell-side analysts at the meeting.

But even before the news of Buffett’s illness, Berkshire was already scaling back this year’s festivities.

Among other changes, the company cancelled the Sunday press conference Buffett and vice-chairperson Charlie Munger used to hold with international press.

To some degree, he is not slowing down. Fortune writer Carol Loomis, a long-time friend of Buffett’s who helps edit his annual letter, reported on Tuesday that Buffett was out on the town one day after his diagnosis, having dinner with the [unrelated] entertainer Jimmy Buffett.

The only major change in his schedule? He skipped his regular Monday night online bridge game, Loomis said. — Reuters

Effective communication from leadership is essential during a crisis

Could this finally solve the Eastern Cape’s cancer mystery?

Steinhoff — The largest corporate failure on the JSE