Blues as banks hunt for customers 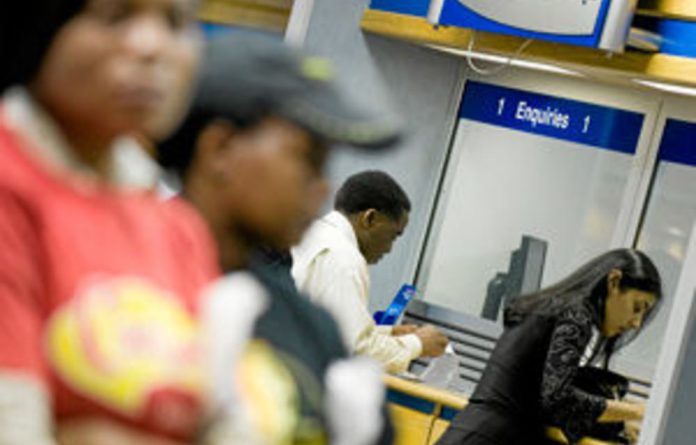 New regulations, notably Basel III, could have an impact on their profitability and because cash-rich corporates are now less likely to borrow money, they will have to seek growth in other arenas, according to experts.

The role of the “shadow banking sector” players, such as the large life insurance and asset management firms where South Africans traditionally save their money, could also change as the industry looks for new ways to manage funding.

Pressure on profitability could potentially result in banks increasing unsecured lending, a sector whose rapid growth rates have begun to raise eyebrows.

Future growth in doubt
With the looming regulatory changes as well as other economic pressures, local banks will be hard pressed to find future growth, according to Matthew Pirnie, associate director for financial institutions ratings at Standard & Poor’s Ratings Services.

South African households remain highly indebted and the local real estate market is not likely to experience a good deal of recovery in the short to medium term.

Added to this, South African corporates are extremely cash-rich but not investing. As such, they are unlikely to borrow from the banks.

Growth for the sector was likely to come from increased fees and commissions, expansion into Africa and expansion in unsecured credit.

Concern about unsecured lending is mounting because its growth has been “pretty big”, Pirnie said. Wage-price inflation in the lower end of the consumer market, where most unsecured lending has taken place, has been relatively robust in the past, increasing borrower affordability.

Benign economy
However, the government and the private sector are expected to work hard to control wage-price inflation and the economy is expected to remain benign. As such, affordability is not increasing at the same rate as competition and growth in unsecured lending, which could form a bubble.

Subsequently, there could be some spikes in asset quality problems in this space, he said, if growth continued at current rates into 2013.

Unsecured lending in the sector has grown by 50% year on year in the third quarter of 2011, according to data from Standard & Poor’s.

Pirnie said, however, that problems in unsecured lending could be spotted early on and resolved relatively quickly for proactive risk managers.

In addition, unsecured lending made up a small percentage of the big banks’ balance sheets.

Aspects of the tougher Basel III regulations, notably the new requirements on long-term funding ratios, will be particularly difficult to swallow, he said.

Basel III will require the banks to meet two key ratios: the liquidity coverage ratio and the net stable funding ratio. The former is aimed at ensuring that banks have a stock of high-quality liquid assets that can meet a 30-day cash outflow in the event of a crisis, such as a run on a bank for instance.

The latter is aimed at ensuring that banks have enough long-term, stable funding to protect against a protracted stress period of up to a year.

Pirnie said that South African banks would have the most difficulty meeting the requirements for the net stable funding ratio, because it went to the heart of how local banks traditionally raised and used funds and where South Africans put their savings.

It could mean a “game change” in how the “shadow banking” system — or the institutional investors where South African’s traditionally save their money — operates, including its possible expansion into the credit market, he speculated.

Banks are last for saving
Traditionally South Africans save through long-term insurers, asset managers and institutional investors, rather than with the banks.

Retail funds go to institutional investors, said Pirnie, where a large amount of this money ended up as concentrated, short-term wholesale funds with the banks — a source of funding they have become “reliant on”.

But Basel III ultimately aims to reduce this concentration of short-term funds.

Banks will either have to increase their retail funding, creating products with better interest rates for savers, or source long-term money offshore in regions such as the European Union and United States.

They could push institutional investors to deposit money on longer terms, but because this is more expensive for the banks, they are likely to reduce their holdings of these funds.

“If the banks are to become more competitive from a retail point of view and they are going to remove the concentration of institutional funds, where are they going to be investing their money?” Pirnie asked.

Because institutional investors were likely to have more cash, Pirnie speculated that it might result in these firms becoming active in the credit space. “They will be searching for yield and could be much more active from a credit point of view.”

According to Pirnie, this is likely to be in the corporate credit arena, which is generally “easier to manage” than domestic retail credit.

Although the liquidity coverage ratio would require work to implement, it was not impossible, he said.

Paul Greef of Global Credit Ratings said the new regulations could raise banks’ funding costs by as much as 30%. The liquidity coverage ratio, in particular, could put pressure on banks’ profitability and their return on equity.

“Banks may have to increase their liquid asset holdings, which will in turn reduce asset yields, and the additional resources required to track these ratios will have an impact on operating costs,” he said.

Customers could suffer
Banks could pass on these additional costs through increased customer pricing and the growth of unsecured lending, Greef said.

But the potential for higher fees could be offset by increasing competition between banks and pressure to curb their costs, he said.

Almost no developing nation would find it easy to implement these aspects of Basel III, said Greef, but in South Africa banks had traditionally been good at managing their liquidity.

Although the rapid growth in unsecured lending did need monitoring, he said, it remained only 8% of all lending by banks in the country.