Apprentice in training for top job 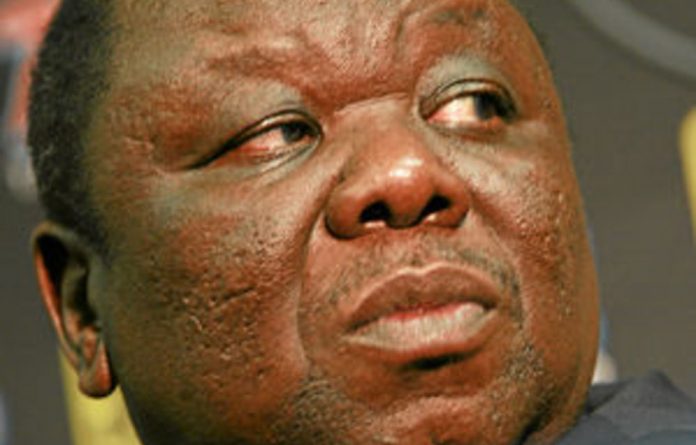 As Zimbabwe marked 32 years of independence on Wednesday, opposition leader Morgan Tsvangirai of the Movement for Democratic Change (MDC) defended his party’s involvement in the frail unity government while the political stand-off headed into a third election contest.

Tsvangirai’s residence — a modest home in Harare’s Strathaven — feels claustrophobic and uncharacteristic for the country’s second-most important person. The cream-coloured house, which is surrounded by a high red-brick wall and electric fence, is a far cry from the posh houses in affluent suburbs such as Borrowdale Brooke and Borrowdale that house Zanu-PF bigwigs, including army commander Constantine Chiwenga and President Robert Mugabe.

Seven security guards mill around the large black gate as Tsvangirai meets me behind the house in what turns out to be a fertile garden.

He wears a grey suit, white shirt and a yellow-striped tie and appears tired. Earlier in the day he attended a four-hour meeting with the MDC’s national executive committee at their Harvest House headquarters in Harare’s Nelson Mandela Avenue.

The rumour mill is in turbodrive in Harare over Mugabe’s whereabouts and the MDC leadership has met twice in as many days to “prepare for any eventualities.” Mugabe has been away for two weeks and his absence has put the frail coalition government in limbo, although Mugabe’s office says he is in Singapore to secure a university place for his daughter Bona’s postgraduate studies.

Pleasantries are exchanged and a firm handshake is extended as Tsvangirai takes a seat at the head of the glass table, laying aside a copy of the Daily News and his Blackberry Curve. “What we are reading in the papers is quite alarming and exaggerated”, he says. “Of course, he [Mugabe] is an old man and is not getting any younger, but he is not on any deathbed. He told me before he left that he was going to have one of his eyes checked. For his age, I have always been surprised by his state of health and how he is mentally fit.”

Preparing for another round
Tsvangirai is set to face the 88-year-old Mugabe in a third election contest, after previous encounters in 2002 and 2008.

Mugabe is lobbying for an early election this year and in what appears to be an endgame manoeuvre — with or without a new Constitution — is hamstrung by uncertainty over what action the Southern African Development Community will take against him should he go it alone.

SADC is the guarantor of the global political agreement signed between Zanu-PF and the MDC in September 2008. Political observers, however, say Mugabe’s advanced age and fragile health are the reason for his persistent calls for early polls, which he is bent on winning and which, should he be victorious, will result in him handing over power to an as-yet-unnamed successor. Deputy President Joyce Mujuru and Defence Minister Emmerson Mnangagwa lead Zanu-PF’s two rival factions and are slugging it out in a succession race.

“The problem is that Zanu-PF’s succession issue has never been concluded. It is a speculative process and that is what gives Mugabe a tight grip on his party,” says Tsvangirai.

What of reports that Mnangagwa is the favourite to succeed Mugabe?

He pauses and answers rhetorically: “How can Mnangagwa jump the queue? He is way down the order of Zanu-PF and it is expected that people will promote their own candidates when it becomes clear that the future lies elsewhere.”

Tsvangirai also denies longstanding rumours that Mujuru’s faction — viewed as the more liberal of the two groups — has made any advances to the MDC in an effort to cut deals under the cover of darkness. “There is nothing of that sort that has ever happened; no one has ever approached us,” he says.

Losing the plot?
Under the three-year-old unity government, criticism has been mounting from the MDC’s traditional supporters, such as farmers’ unions and civil society organisations, which accuse the party of cosying up to Zanu-PF and abandoning its “change” mantra. The party is now caught up in the trappings of power with Zanu-PF, say detractors.

“The tragedy is that people blame us for all the shortcomings of the unity government,” says Tsvangirai. “The first two years were productive — hyperinflation was stopped, schools were opened and the children received textbooks and the economy really was turned around. But the weakness of the government is that everything must be done by consensus and Zanu-PF has backtracked on every major decision.

“If going into the coalition government saved and gave a shield to Zanu-PF, it was a tough decision [for us] to make, but it was a better choice to make than to have no country at all. As the MDC, we couldn’t just sit and wait for Zanu-PF to implode and then move in to save the country when people were dying and thousands were fleeing the country.”

Is the MDC ready to govern? I ask, because some accuse the party of not having any recognisable policy or programme that sets it apart, besides trying to remove Mugabe from power for the past 13 years. “We are the only party in the world that has been given a chance to undergo apprenticeship in the last three years through our involvement in the unity government,” says Tsvangirai.

“People must judge us on the capacity and potential that we have demonstrated so far and what we have done. Even Zanu-PF never had the chance that we have — straight from the bush in the 1980s they had to go into government. But the MDC has evolved from a movement into a party that has established internal mechanisms that support democracy.”

Events elsewhere in Africa seem to give Tsvangirai an inkling of hope. He points out that developments on the continent show that it is “no longer business as usual” and Zanu-PF will not be allowed to escape scot-free should it turn to violence and intimidation in the next election. Tsvangirai foresees elections being held only next year and dismisses Mugabe’s attempts at an early polls as those of a desperate man.

The interview ends, but not before Luke Tamborinyoka, Tsvangirai’s spokesperson, interjects: “Just watch us in the next 10 months.”

Pretoria can make a real difference in helping to solve conflicts and other issues in Burundi, the DRC, South Sudan and Zimbabwe
Read more
Coronavirus

Even before the Covid-19 pandemic, the situation in Zimbabwe could not have been much worse
Read more
Advertising
Continue to the category
Education