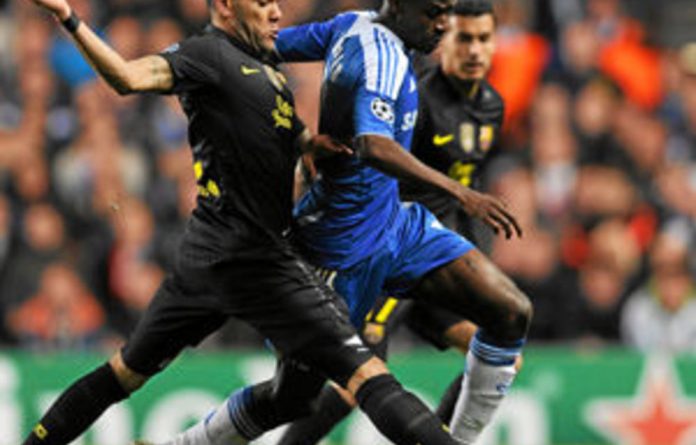 Dani Alves sits behind a large desk in his office in Sant Just Desvern, a small town near Barcelona, wearing a shirt, tie and jacket. Behind him, a cabinet containing countless football shirts, folded neatly, as well as photographs and trophies. Lots of trophies. Through the glass to his right, a board meeting. Through the glass to his left, reception: a leather sofa, the morning’s papers, a television showcasing danialves.com and replaying highlights from the 2011 European Cup final — “the best moment of my career”, he says. The only thing missing is a box of business cards. But what would they say? “Daniel Alves da Silva, right back”?

It would be the most inadequate business card ever, after “Leonardo da Vinci, painter and decorator”. “But,” says Alves, “I am a right back.” A right back, full stop? “No, not full stop, no.” It is just that Alves’s concept of fullback, his philosophy of football, is different. So is that of his coach, Pep Guardiola. “In the Brazilian school, the emphasis is on attacking,” Alves says, “but that doesn’t mean I’m not a fullback.

“Take Gareth Bale, a player I love. He’s a fullback in the Brazilian mould, he has a similar idea. In Europe [Spurs] play him as a winger, but in my team he’d always be a fullback.

“People get scared and play attacking fullbacks as wingers. They think they will attack more, but often they attack less and less well. It happened with Roberto Carlos: as a winger, he was less effective; he needs to start his run sooner. Bale is more skilful and good as a winger, but at Barcelona he would be a fullback.”

Multi-dimensional Dani
It is not about names; it is about concepts. This is not a pitch for Bale, although Barcelona have watched him. It is an illustration. When Chelsea manager Roberto di Matteo scrawled on the tactics board before Wednesday night’s Champions League semifinal first leg, he had a dilemma when it came to Alves — the player, says Guardiola, who allows Barcelona to play four or three at the back in the same game.

The driving force behind the most successful Sevilla side in history, topping the La Liga assist charts one season, involved in more moves than anyone else in Spain the next, Alves found the perfect home at Barcelona when he arrived in 2008.

They, in turn, found the perfect player: right back, right midfielder, right winger, centre forward, central midfielder, support striker, tackler and play-maker, all wrapped into one hyperactive ball. As Jorge Valdano put it: “When Dani Alves runs up the pitch, he meets himself running back down it.”

The previous season Chelsea had baulked at the €36-million price for just a defender. But Alves has never been just a defender. He was one of only two signings Barcelona made — the other was Gerard Piqué – after two years without winning anything. Then they won the treble. A glance at the trophy cabinet tells the story: three league titles, two Copa del Reys, four Spanish Super Cups, two Uefa Cups, three European Super Cups, two Champions Leagues, two World Club Cups. Eighteen trophies since 2006.

When Lionel Messi broke Barcelona’s goal-scoring record, Alves had provided 31 of them — more than anyone else. In 2009-2010 he gave more assists than anyone else in Spain; this season only Messi, Ronaldo and Angel di Maria have provided more. According to statistics from Opta, only Messi and Xavi have had more touches on the ball in the opposition’s half than him. Ah, say the critics, but that is because he does not defend.

Alves’s response is sharp: “People automatically think that, because you attack, you can’t defend. Not true. What we cannot do is play with 11 men behind the ball. Defend? Defend what? You can’t defend, in the traditional sense, a team that does not attack you. And we defend by stopping them attacking us. If I am asked to defend, it’s tough because I like attacking, I like to participate, but I will do it.

Winning is paramount
“We’re taking football back to its origins. Interests have changed everything: all that matters is winning any way you can. If you don’t, you are worthless. For me, that’s not football. When I was young I wanted to win, but I played because it was fun. Our approach has a bit of that. Enjoyment. I love football, adore it. We have to give something back to the fans.

“Because I already had a similar concept to Barcelona, that made coming here easier. It was also why Barcelona signed me: they knew I would fit in.”

Their game is touch, technique, combination, attacking. Barça always sign players who share the approach, with the right characteristics.

“The most difficult thing about Barcelona is not the way they play but their way of understanding the game. Tactically, I’ve improved under Pep, learning to do the simplest thing, which sometimes is the most difficult thing. But the key is the way we pressure — and the first person to lead the pressure is our best player, Leo Messi. That’s the starting point for an entire philosophy. I never thought that a team could pressure like we do: from minute one to minute 95. Pep’s greatest success is convincing players, even great players, to do that.”

He recalls Guardiola’s message before the 2011 final, a dominant 3-1 victory over Manchester United at Wembley. “The only thing he asked us to do is attack — it’s the only way to win, especially against physically strong teams with devastating counter­attacks.

You can’t let them have the ball: if they have the ball, you have to get it back. Quickly. After the final, [Nemanja] Vidic congratulated us, saying we had a spectacular team. When you hear that from people who really know about the game and how difficult it is to be a footballer, it’s the leche, the business.”

Intelligent footballer
Alves (28) speaks intelligently and analytically; he knows his image is different and admits that sometimes he does not recognise himself on the pitch. Asked whether he would ever be a referee, he sounds terrified. “No!” he exclaims. “People already don’t like me — imagine what it would be like if I was a referee!” It is clear that the pressure counts.

“People think that footballers just have a kick around with their mates. If they win, fine; if they don’t, that’s then fine too.

No pasa nada. No. You have an obligation and responsibility. The fear of losing makes you better because it stops you cruising. Big teams and big players are scared sometimes too. What you can never be scared of is playing.” —