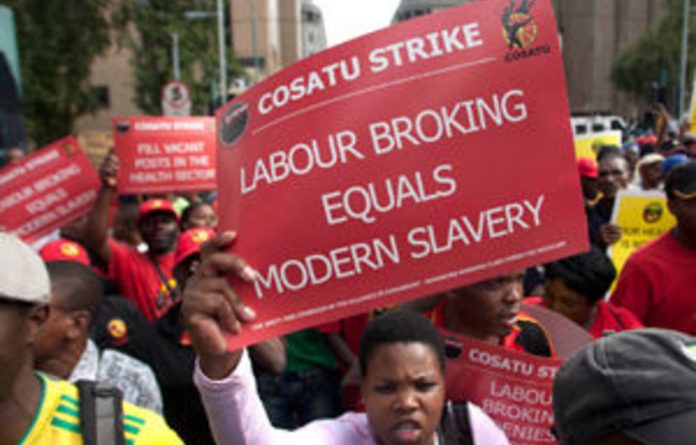 The South African workplace, already one of the most litigious in the world, is about to become more so as the new set of labour-broker rules, pregnant with unintended consequences, emerge from the National Economic Development and Labour Council and head for Parliament.

Labour law experts and practitioners agree that although the trade-union federation Cosatu may have lost its fiery bid to ban labour brokers in South Africa, the battle will disperse to the workplace where thousands of temporary, contract and part-time workers will latch on to concessions made in the new rules to push employers for permanence and better pay.

How far they will get is not clear. The amendments to the Labour Relations Act and the Basic Conditions of Employment Act are vague enough to keep the jury occupied for a while, besides the fact that some employers will react by shedding employment in favour of mechanisation. But experts predict with certainty that workplace litigation at the Commission for Conciliation, Mediation and Arbitration (CCMA) and bargaining councils will increase.

Overloading the arbitrator
This will bring even more pressure to bear on the CCMA, already creaking under an eye-popping caseload of close to 160 000 a year, as one of the quietest sectors of the workforce turns to it with expectations raised by the new amendments.

Loane Sharp, economist at employment agency Adcorp, said figures obtained from the CCMA (although later questioned by the same body) indicated that labour-broker employees made up 7.5% of the total South African workforce but contributed only 0.8% of the commission’s cases.

But if the experts are right, the amendments, however murky, are set to awaken previously submissive temporary, contract and part-time workers to the potential of labour litigation.

The first promise of the new amendments to non-permanent employees is that, after six months of working at an employer, they have the right to pay and benefits equal to those of permanent employees at the same company who do comparable jobs.

Johannesburg-based labour lawyer Jonathan Goldberg said similar rules in other jurisdictions had proved ineffective because it was always possible to argue a differential between two workers and the amendments did make provision for differentiating on the basis of factors such as seniority, qualification, output and time in employment.

How many workers will eventually benefit from this rule is therefore questionable, but Goldberg is certain of two outcomes. One is that there will be a flood of litigation in terms of the new rule.

The second is that, faced with the possibility of an unaffordable CCMA or Labour Court order to bring temporary employees up to the pay levels of permanent employees, many employers will eradicate any difference between workers by shedding permanent staff and outsourcing entire tiers of employees to labour brokers. The “burning platform” created for employers by the new legislation will, bizarrely, lead to an increase in the use of temporary employment services, believes Goldberg.

The second handle on the new amendments that temporary and contract workers are likely to grab hold of is that, after six months’ placement at a company, they are deemed, as far as dismissal disputes are concerned, to be permanently employed there.

Cape Town-based labour lawyer Michael Bagraim said this provision was good for lawyers but bad for employers and labour brokers. He said labour jurisprudence had already established that the labour-broking industry could not simply rely on contracts that state the workers’ employment comes to an end when the client business no longer wants them. “You have to have a good reason and you have to go through a [dismissal] process.”

The amendments add to this burden by placing the onus on the hiring business to prove why the employment contract of a worker sent back to a labour broker should not be made permanent. It was doable, said Bagraim, but it meant more formal paperwork, preparation and litigation. He used the example of a worker hired for longer than six months to stand in for someone who had taken a year off on maternity leave. The business would have to prepare and keep “evidence” that the position was indeed temporary, such as statements from the permanent employee that she intended to return.

Bagraim believes this shift of onus will lead many employers to question the value that labour brokers have to offer. The larger brokers are adapting their service to include support for the increased paperwork and by indemnifying their clients from the cost of labour disputes. Because small labour brokers are not able to afford this, many will go out of business.

Adcorp’s Sharp believes that the new legislation will lead to “serious consolidation” among the 3 000 employment-service companies in South Africa so that, over the next five to seven years, the number could whittle down to as few as 100.

But Natalie Singer of the industry body African Professional Staffing Organisations believes it is more likely that many of the hybrid services that offer, for example, head- hunting as well as a bit of temporary placement, will drop the labour-broking side of their business.

Angela Dick, chief executive of Transman, one of the biggest labour-broking firms in South Africa, said it had for years indemnified its clients, at no cost, against any labour litigation that resulted from a mistake on Transman’s side. Costs resulting from disputes caused on the client’s side are covered if the client chooses to pay an indemnity fee, which ranges from 40c an hour for a worker costing R10 an hour to R3.40 an hour for one that costs R80 an hour. More than 90% of Transman’s clients chose to pay the indemnity fees, which would have to rise in the wake of the new laws, she said.

One of Transman’s indemnity-buying clients is Derek de Jong, owner of MPR Hiring, a Johannesburg-based event logistics company. His 42-year-old family-run company has been using Transman’s services for the past 12 years. Twelve managers and core staff members are employed directly by him, but the 40 to 60 labourers, storemen and drivers are on Transman’s books.

De Jong is adamant that if the new amendments change his ability to make use of Transman workers “I’m out. I’ll put a sign up that says ‘Business for sale’ and I’m out of here.”

He is one of many owner-managers who found the teething problems with South Africa’s new labour dispensation in the late 1990s difficult to cope with and turned to Transman after a disastrous bout of union trouble and attempts at workplace discipline. Today, the service means much more to him than simply a way of deflecting disciplinary issues. “It is effectively my human resources,” he said.

The service takes care of vetting, registration, payroll, levies, provident fund and even medical aid issues. It gives MPR Hiring the flexibility to set up marquees for events in any part of the country without having to transport workers far away from their homes. The workers have a three-tiered salary structure depending on the work they do and De Jong has promoted promising Transman employees to managerial positions and to his permanent staff.