‘There’s shit in the water’ 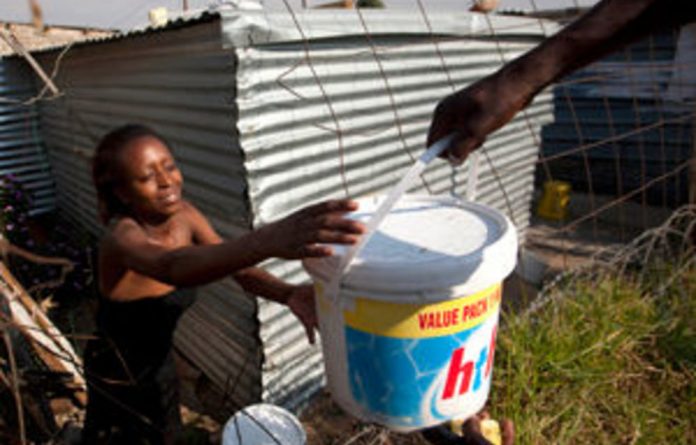 It was a scene almost perfectly designed to underscore Edna Molewa’s dire warning. Even as the minister of water and environmental affairs said in Cape Town that R15-billion was required for the overdue short-term maintenance of essential water infrastructure, people in Diepsloot, north of Johannesburg, were queuing at water tankers or worrying that they were about to fall ill because of contaminated water.

“Yesterday there was water in the tap and I gave it to my baby,” said a woman identifying herself only as Thandi, in a part of the township that overlooks row upon row of shacks.

“They said there was shit in it, then they said it was fine, so I tried it and we all drank it. Are we going to get sick?” From now on she will walk the kilometre or so to her nearest water point and wait there all day if necessary, and will continue doing so until somebody in authority assures her the water is safe for her child.

South Africa, Molewa said in Parliament the day Thandi drank the worrisome water, required R573-billion over the next 10 years to keep the water flowing — and less than half that money had been budgeted. The rest would have to come from somewhere and higher prices were definitely on the cards.

In Diepsloot, meanwhile, the cost of water was already high. Several residents risked the dash across the busy N14 highway, some with babies on their backs, to queue outside businesses with boreholes. Some walked for kilometres to water sources nearer to the rich enclaves of Dainfern and Kyalami. Most stood in long lines in front of green water tanks scattered throughout the township to wait their turn for the 10 minutes it takes to fill two 20-litre containers. Then they struggled home, resting often along the way.

“I think it’s going to take me about an hour to get home,” said 14-year-old Lungi, sitting by the side of the road. “My arms get tired — The taxis come by, but I don’t have money and they don’t want people with water. It’s okay; tomorrow I’ll send my sister.”

Diepsloot, home to hundreds of thousands, in existence for two decades and 20 minutes from Sandton, is among the areas in South Africa that can normally count on running water that is perfectly safe to drink. This is perhaps why its people were so ill prepared when disaster struck.

“I normally only have one bucket we use to get water from the tap on my street,” said Joy Mphela, filling two buckets from a tank. “My friend got some buckets from her boyfriend at work, so now I have one for cooking water. But if I want to flush the toilet, I’ll have to come again and wait here. It took me three hours to get here [to the front of the queue].”

Clumsy contractor
The trouble started five days before Molewa released her figures, when a contractor working on the area’s sewerage system broke a water main, Johannesburg Water says. The break was quickly repaired and the water started flowing again, but by that time, it seems, raw sewage had leaked into the water system — potentially carrying E coli and worse.

Tests and confusion and more tests followed. The city water agency collected two rounds of samples from various points, both of which showed the water to be drinkable, but continued to advise residents not to drink tap water. A third test showed potential contamination, although the tests apparently (and to the considerable surprise of water experts not involved in the process) did not provide details or allow the source of the contamination to be pinpointed.

Several failed attempts to flush the system resulted in water being temporarily restored to different parts of the township before being turned off again. Word spread that the water in one extension was safe to drink, but the taps remained dry because of the flushing exercise. Meanwhile, schools closed early, businesses struggled and the middle-class notion of water-cooler conversations and flash mobs took on an entirely new meaning. “We sit here and we talk and talk and maybe the trucks will come and fill it again,” said Bob Maswanganyi on Tuesday, pointing to the empty tank on Ubuntu Street, one of 64 such stationary points. The tank had been empty for four hours. Some people left their containers in the queue, forming a line of more than 100 buckets and bottles and other plastic containers.

But some were not about to go home. “We can’t go to work dirty and we don’t have money, so we sit here and talk,” said Maswanganyi.

Gathering for water
In other parts of Diepsloot instant crowds formed as laden water tankers returned from their filling point nearly 20km away. Any driver who stopped for one pleading mother with a baby and a bucket soon found himself mobbed and many a truck ran dry before it could run its rounds.

By Wednesday things were slightly better: shorter queues, fewer people crossing the highway for water and tanks dry for shorter periods. “We have the Johannesburg Metro Police department on board now,” said Millicent Kabwe, spokesperson for Johannesburg Water. “The supply was always enough, but we’d have residents go with 15 buckets at once, not being considerate to their neighbours. Now that is sorted out.”

The atmosphere was considerably less panicky than in previous days. Residents said they had come to accept their new circumstances and learnt to trust that the trucks would keep coming.

But when, they wanted to know, would they have water again? Nobody could say.

“We’re doing everything possible to restore drinkable water in all areas as soon as we can,” said Kabwe. “We don’t want a situation where we’re — compromising water quality.”