Where block bookings are welcome 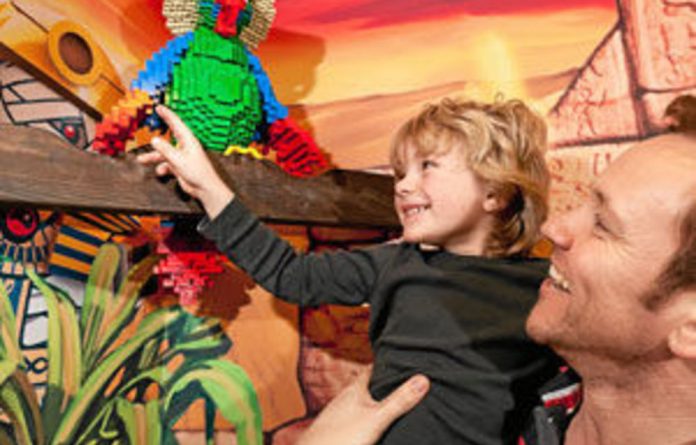 How much you like the new Legoland Hotel will depend a lot on your age. In the castle-themed play area by the bar — noisy with happy, shrieking children — some adults are displaying a grim stoicism. “If the children are happy, I’m happy,” one mother says, with a firm smile. Her husband is more blunt: “Anything is tolerable with alcohol.”

From the children there is cynicism-free, unadulterated delight. If it is mildly disappointing to discover that the hotel walls are not actually constructed from millions of tiny plastic bricks, there is a display of (apparently) 5 000 Lego mini-figures to study while parents check in and the chance to sit on the floor and play in an enormous pit of Lego.

The entrance looks as if it was designed by an enthusiastic five-year-old in a jumble of primary colours with vast pieces of Duplo.

There is Lego everywhere. The flowers at reception are made from it; there is a massive green Lego dragon guarding the front door; above my bed, there is a Lego skull, gripping a Lego sword between its Lego teeth. Perhaps most thrillingly, the chips in the restaurant are shaped like Lego bricks.

There are tubs of Lego everywhere for children to tip up. I begin to feel silent solidarity with the people who tidy up. By 8pm in the play area, hundreds of small pieces are scattered across the floor.

Parents will know how time-consuming the daily Lego clear-up is — and this is on an industrial scale. But overnight, unseen hands do a remarkable job and by breakfast all the pieces have been put away, ready to be hurled around again.

Our room is on the pirate floor (there are also kingdom- and adventure-themed rooms). The bunk beds appear to have been blasted by cannon balls; there are skull-and-crossbones pillows and treasure-map designs on the carpet. A treasure trail inside the room leads you to a code that unlocks a padlocked vault in a corner, guarded by a Lego monkey, which contains more Lego. It is unquestionably the most exciting place my children have ever stayed — and their happiness is infectious.

Attention to detail
The designers have obviously had a lot of fun planning the hotel. There is no white space anywhere; even the doors to the loos are covered with images of Lego people. Inside the lifts, a cheerful Lego man cracks jokes. At children’s ear level, some of the Lego statues are programmed to whisper messages.

It is 18 months since my six-year-old son found out that a Legoland Hotel was under construction and the subject has come up since then with startling frequency. It is hard to overstate the intensity of his anticipation. His dedication to Lego knows no bounds. He gets up at dawn and goes downstairs to fiddle with his collection of bricks and yellow people long before anyone else wakes up. He positions Star Wars warriors around the house: they are pointing their weapons at you when you lie in the bath. I find pieces embedded in ice cubes in the freezer, buried in the garden, tucked between socks, in clusters underneath the duvet. We have all had to develop a special protective anti-Lego walk, a kind of furtive hop, to prevent the agonising pain of stepping on one of the hundreds of bricks barefoot.

So it is a cruel injustice that on the night we are there he is attacked by a terrible sickness, which I do not know whether to attribute to overexcitement or flu. I spend much of the night with buckets and towels, battling to stop sick from touching the new carpet.

In the morning, he is not strong enough to eat anything, but wanly casts appreciative eyes over the display cabinet next to the restaurant, which is full of ingeniously built skyscrapers with tiny windows into minute rooms where you can see Lego figures eking out solitary urban existences.

In one room, you catch a Lego woman stepping out of the shower, horrified to see people peering in at her.

A night in the hotel is not cheap: packages start at £248 for two adults and up to three children, including two days’ entrance to the park.

Perhaps a cheaper way of doing it would be to go for the hotel only, with bed and breakfast from £140, and try to collect discount tokens for park entry (we got them when we signed up to the free Legoclub magazine (club.lego.com/en-gb/behindthebricks/default.aspx). But guests who go for the package can go into Legoland, next to the hotel, at nine, an hour before it opens to everyone else and queues start building. As we have been awake since five, we are more than ready by then.

It is testament to the powerful attraction of the theme park that my son drags himself along with a heroic determination to enjoy himself, despite having been sick five times in as many hours. He manages to smile occasionally, but in the end it is too much for him and he begs to go home.

Unexpectedly, I am the person who enjoys herself most. —